Rouhani says 'We will not accept scientific or nuclear apartheid'

Before the nuclear negotiations resume this week, Iran's supreme leader, speaker of parliament and president all gave speeches about Iran's priorities in the negotiations. 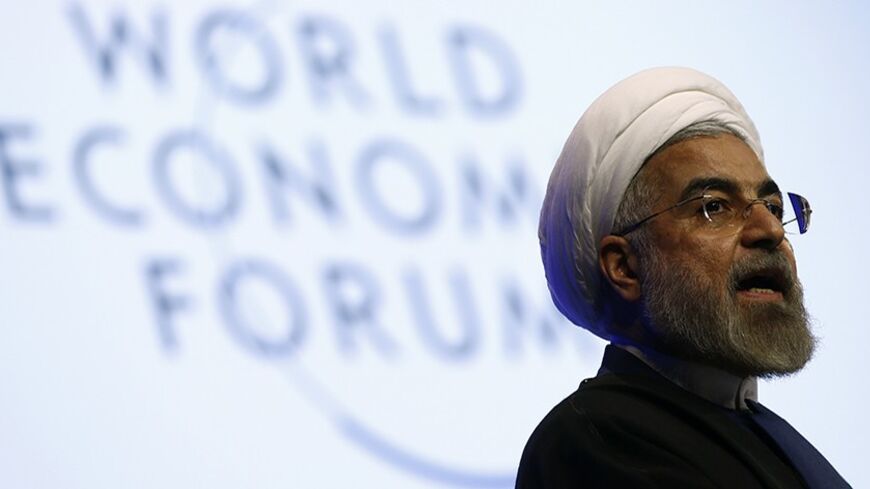 Iran's President Hassan Rouhani speaks during a session at the annual meeting of the World Economic Forum in Davos, Jan. 23, 2014. - REUTERS/Denis Balibouse
Arash Karami
@@thekarami
May 12, 2014

With talks between Iran and the UN Security Council scheduled to resume this week, Iranian leaders have reiterated their key positions and voiced their concerns. Supreme Leader Ayatollah Ali Khamenei said Iran must not rely solely on negotiations to resolve its sanctions issues, parliament speaker Ali Larijani said that Iran’s only red line is the production of an atomic weapon and President Hassan Rouhani said that Iran would not give up any of the scientific accomplishments made in its nuclear program because the West has not stuck to its commitments in previous agreements.

“We are after our national interests, and we will not accept nuclear or scientific apartheid,” said Rouhani. He added that if Iran is going to progress economically, it needs to maintain its scientific independence, saying, “In the direction of science, knowledge and progress, the Atomic Energy Organization had no choice but to stand on its own feet for its scientific goals and technological achievements.”

“All of the commitments the West had to us — from America to Germany to France — none of them were carried out,” said Rouhani, in a reference to the agreements the West made with the government of Mohammad Reza Shah before the revolution. “Neither was America ready, based on its own commitments, to give Tehran reactor fuel. Neither was Germany ready to continue its work at Bushehr. Nor was France ready to act on its commitments in the fields of the joint [plans]. They were not even ready to hand over the [uranium hexafluoride], which belonged to us.”

Larijani said at an open session of parliament on May 12, “The red line for the quality of our nuclear technology based on the fatwa of the supreme leader is the production of a weapon and nothing else.” Larijani said that US officials have lately made “political gestures” about the numbers of Iran’s centrifuges or the limits to Arak’s heavy-water reactor.

Larijani, who has been a vocal supporter of Rouhani, said that Iran’s goal in the negotiations is to address the “unfounded accusations” against Iran’s nuclear program. He called the negotiations “serious” and said that Iran is after “its full rights.” He added that Iranian negotiators “would not relinquish any of its nuclear rights, including enrichment at the level of enrichment at a plant, research and development, without any limitations.”

At a May 11 aeronautics fair presented by the Revolutionary Guard Corps, Ayatollah Khamenei said, “I have always been and still am supportive of creativity in foreign policy and negotiations. My recommendation to the officials in foreign policy and international exchanges has always been to use whatever amount of effort and creativity there is. But we must not tie the needs of the country and other issues such as sanctions to the negotiations.” He added, “The officials have to resolve the sanctions through other means.”

Khamenei also called on the Revolutionary Guard to increase its missile production and called any demands for them to limit their missile capabilities “idiotic.”

by Murielle KASPRZAK and Joseph SCHMID | AFP | May 26, 2022
END_OF_DOCUMENT_TOKEN_TO_BE_REPLACED