Tehran is launching construction work on the first of two new nuclear units in a $10 billion expansion of its power plant and has begun enriching uranium at a site formerly limited to research. 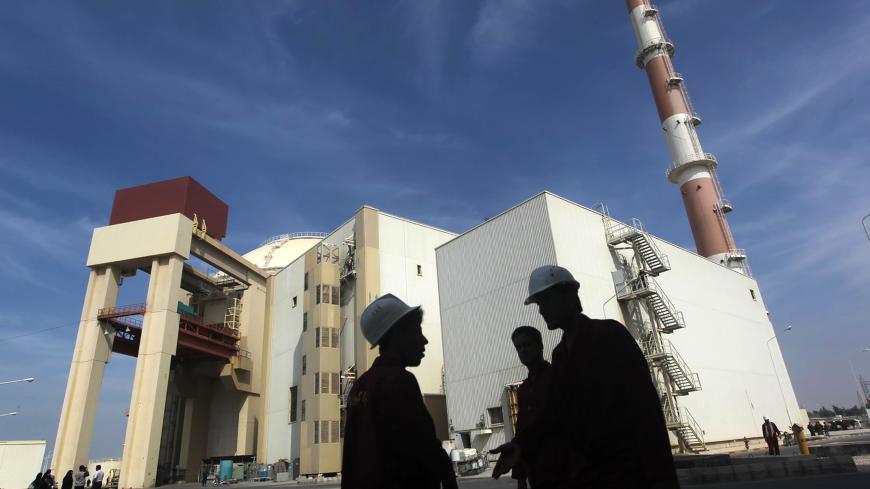 Iran is taking another step toward expanding its nuclear program by officially starting construction of the second unit of the Bushehr nuclear power plant.

Tehran showed it is determined to continue this program by announcing Nov. 10 it has begun expanding the commercial reactor site. On Nov. 5, it had announced it would begin enriching uranium at its Fordow plant, which under the 2015 nuclear deal (the Joint Comprehensive Plan of Action, or JCPOA) was to be used only as a research facility until at least 2031.

Iran began building up its nuclear program after US President Donald Trump unilaterally pulled the United States out of the agreement in May 2018. The other participants are trying to renegotiate conditions with Iran: Russia, China, Germany, France, Britain and the European Union.

These actions are in line with the orders of Iran's supreme leader, Ali Khamenei, who on Oct. 2 said, “With utmost seriousness, we will continue reducing our JCPOA commitments." In a Nov. 15 speech, he also linked the development of Iran’s nuclear industry to the country's independence.

“Peaceful nuclear energy is needed by nations, but Western monopolists are seeking to keep this energy to themselves,” he said. “They oppose the Islamic Republic’s nuclear advancement to hinder Iran from gaining science, industry and nuclear capability.”

Iran’s production capacity of low-enriched uranium has reached about 5.5 kilograms (12 pounds) a day, compared with about 450 grams (1 pound) under the JCPOA. Iran's enriched uranium stock for use in its nuclear plant has reached more than 500 kilograms, and that amount is increasing, according to the Atomic Energy Organization of Iran.

Iran signed a contract with Russia in 2014 for construction of Bushehr units 2 and 3. They are expected to be completed in 2024 and 2026, respectively. Each will be able to generate 1,050 megawatts of electric power, which means that by the end of 2026, Bushehr’s three units will produce a combined 3,114 megawatts.

Atomic Energy Organization of Iran President Ali Akbar Salehi said Iran has allocated $10 billion to build the two new units — which is more than the $7 billion it has spent on its nuclear industry over the past 25 years. Currently, about 85% of the electricity produced in Iran is generated by thermal power plants, about 10% by hydropower plants, about 3% by other sectors such as renewables, and about 2.7% by Bushehr. The plant generated almost 38.8 million kilowatt hours of electricity during its entire operation from September 2013 to August 2019. According to Salehi, electricity produced by the three units is expected to reach 20,000 megawatts, thereby increasing the nuclear share of Iran's total electricity production to 8% to 12%.

Launching construction of Bushehr’s second unit has important political dimensions. This event marks a clear shift in Tehran's policy from "strategic patience" to "active and innovative resistance.” On the one hand, this reflects Tehran's disappointment with Europe and the United States; on the other hand, it shows that despite all the pressure, Iran is moving its nuclear industry forward and its hands are not tied. Iran will demonstrate within a short time that it can shed the restrictions it had accepted under the JCPOA.

Rouhani, who is now under extreme pressure both externally and from within, can show his critics that Iran’s nuclear industry has not been shut down because of the JCPOA. The progress with Bushehr as a key symbol of Iran's peaceful nuclear program is meant by Tehran to show that US pressure is ineffective, resistance has worked well and Iran can benefit from the results. Enriching uranium and starting work on new Bushehr units emphasizes that Iran won’t yield to US pressures and can develop its nuclear program individually and with the help of its foreign partners.

Khamenei’s order to reach 190,000 separate work units supposedly was aimed at providing the nuclear fuel needed for just one Bushehr unit, though that figure is disputed.

Now, however, the need for more enriched uranium and a complete nuclear fuel cycle to provide for new reactors seems more rational. Russia currently supplies fuel for the existing Bushehr reactor. With the recent developments at Iran's nuclear facilities, especially in Fordow, Iran will be able to provide at least part of the needed nuclear fuel. Tehran emphasized that if the remaining participants in the JCPOA fail to fulfill their obligations, it can increase enrichment to meet its needs.

The expansion of Iran's peaceful nuclear activities paves the way for greater international nuclear cooperation. As Tehran officials have repeatedly stated, different countries along with Russia can cooperate with Iran’s nuclear industry. However, Russia's nuclear collaboration with Iran has its own significance.

Among the remaining JCPOA members, Russia has the most nuclear cooperation with Iran and despite US pressure has not stopped this assistance. For this reason, Iranian first Vice President Eshaq Jahangiri described Moscow's collaboration with Tehran on building the new Bushehr units as proof of Russia's commitment to its obligations. That’s why Iranian officials differentiate between Russia and the others, and direct all their criticism toward the United States and Europe.

Iran's goal of boosting nuclear cooperation with Moscow isn’t designed to just take advantage of Russia’s scientific and technological capabilities, but also its political power to reduce US pressure. In addition, that cooperation could be a basis for expanding interactions between the two countries in other areas, including the economy, arms sales or political and security cooperation in the Middle East.

Russia's nuclear collaboration with Iran also brings a clear message to the United States in the international arena that Iran's nuclear program is not a "threat" and that Iran can use Russia as a balance against the United States. As a member of the UN Security Council and the JCPOA, Russia keeps the door open for negotiations to preserve the nuclear agreement and prevent Iran’s nuclear program from becoming a threat. In this way, Russia introduces itself as an effective mediator and an active and constructive player. With this policy, Moscow benefits from both sides, dealing simultaneously with Tehran and Washington.

Russia’s efforts to develop Bushehr give it a good opportunity to demonstrate its high technological capabilities in building nuclear power plants and will strengthen its position in that hot market in the Middle East and around the world. It is clear that strengthening Russia’s nuclear presence in the region will lead to its greater regional influence. By developing Bushehr, Russia shows its new clients in the Mideast that US pressure has no effect on its cooperation with its partners and that it can construct nuclear power plants at a reasonable price — and without imposing political conditions.