Egyptian women scared to speak out against sexual harassment

Sexual harassment leads all crimes against Egyptian women, and experts say it is abetted by toothless laws, lax enforcement and societal acceptance of the phenomenon. 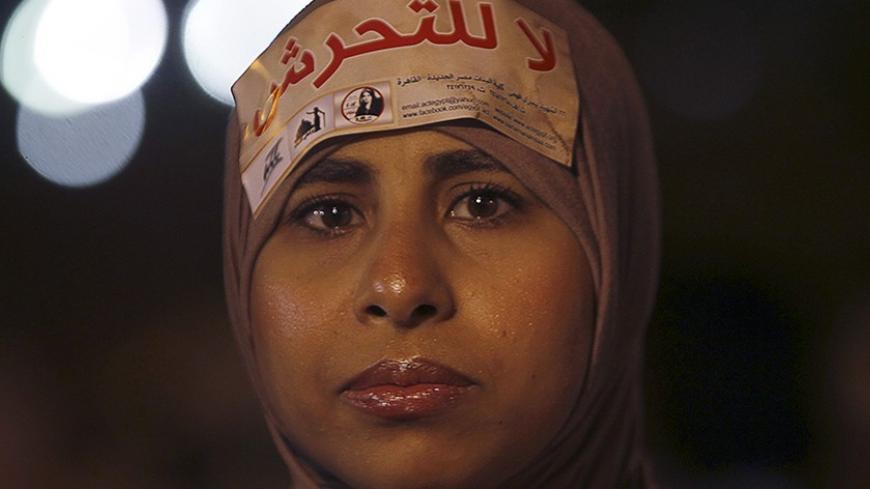 A woman wearing a sign on her head that reads "No Harassment" takes part in a protest in support of women rights in the constitution in front of the presidential palace in Cairo, Oct. 4, 2012. - REUTERS/Amr Abdallah Dalsh 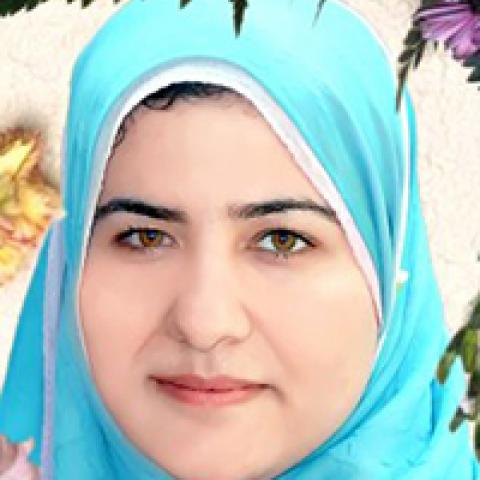 CAIRO — The phenomenon of sexual harassment in Egypt has led to the emergence of grassroots movements defending a woman’s right to safely walk in public places. These movements include the “I saw harassment” movement and the Facebook page “I will not remain quiet about harassment,” among many other movements, most of which are established by victims of harassment.

“Sexual harassment is a pathological phenomenon that was met with acceptance by the street, the law and the regime in Egypt.” That is how Hannah Kamal, a psychotherapist, life coach, yoga teacher and founder of 35B, an institution for psychological and spiritual healing, described sexual harassment.

Speaking to Al-Monitor, Kamal explained the reasons for the phenomenon of sexual harassment in Egypt. “So far, no deterrent legal convictions have been implemented against harassers, giving the impression that there’s a general acceptance of the phenomenon. Thus, the [phenomenon] has spread for the first time to universities, and a group of young men harassed a female student on the campus of Cairo University [in mid-March this year]. Surprisingly, the head of the university and some journalists criticized the victim for not dressing modestly,” she said.

Kamal told Al-Monitor that the reason behind the spread of the phenomenon is the decline in public morality, the lack of security after the January 25 Revolution, and societal acceptance of the phenomenon. She responded to those who blamed girls for not dressing modestly by saying that veiled women are being harassed, too.

“Sexual harassment in Egypt has reached a new moral low. It went from individual action to mass acts, whereby young men who don’t know each other agree to prey on girls and harass them to the point approaching rape,” Kamal said. "This happened during some gatherings on the anniversary of the January 25 Revolution in 2013 and on national holidays,” she said.

However, sexual harassment became more widespread following the January 25 Revolution and after the lawlessness that has swept Egypt ever since. Kamal draws a link between the demise of the Mubarak regime and the prevalence of this phenomenon, saying “repression” is a main factor that led to this case.

“The reason for this shift is that Egyptians were suddenly released from suppression after 30 years of dictatorial rule and smelled the breeze of freedom in January 2011. So all the psychological maladies inside them came out to the surface and were directed toward the weakest in society: women. So impudence entered everything in the Egyptian street, especially given the lack of security. The strong did whatever they wanted with [society’s] weakest.”

Women are widely perceived in Middle Eastern societies as a weaker social segment, which might lead unstable men to perceive them as prey that can be oppressed.

Nehmat Gamal Azar, a victim of harassment and the administrator of the Facebook page "I will not remain quiet about harassment," told Al-Monitor about the vulnerability she faced. “I was weak when I was first harassed by physical contact in the street in 2010. I went and told the [police] station but was subject to another type of harassment by the security men in the station. They asked me: ‘He did what? He touched your … ? Or did he place his hand on your … ?’ They used explicit words, which offended me more than the incident itself. Then they continuously smiled at me and asked me: ‘Were you going there to meet him? Did you know him before then?’ So I quickly left the station. I returned a while later to get the report number so that I could follow up on the case, but I found that they gave me a fake number. No police record had that number.”

Azar founded her Facebook page as an outlet to confront the perceived weakness of women in the face of sexual harassment. “I started working on my Facebook page and I found many girls who had the same experience as I. We started exchanging experiences about how to deal with the issue. The National Center for Women’s Rights contacted me and gave me training sessions on how to protect myself, deal with the harasser and understand his mindset. After that, I was exposed to two harassment incidents. In one of them, I caught the harasser, who was sitting behind me in a minibus, and I took him to the nearest [police] station. That case is still in the courts.”

Fadia Abu Shahba, a professor of criminal law at the National Center for Criminal and Social Research and the head of the Department for Criminal Treatment, said that the law against harassers has been amended, with the highest penalty being three years in prison for sexual harassment and death in the case of rape.

But Abu Shahba told Al-Monitor that this penalty has little teeth, saying, “The girl or woman who was harassed must have more courage and notify the police. But what happens is that the girl and her family fear for their reputation [in case] it becomes known that she was harassed or raped.”

Abu Shahba, who visits prisons to analyze the psychology of offenders, met a man in the prison of Abu Zaabal who was detained on charges of rape. He told her that he had committed 21 rapes, and that he didn’t differentiate between a child, an elderly woman or a young woman. Unfortunately, the 21st crime was the first to be reported.

“When the victim remains quiet because she knows that her home will be destroyed if her husband finds out that she was raped and that it will be a mark of shame on her forehead and the foreheads of her children, it encourages the [criminal] and his [likelihood] to repeat the crime,” she said.

Indicators so far don’t give much hope for Egyptian women. In November 2013, the Thomson Reuters Foundation issued a report on the status of women in the Arab world, which showed that sexual harassment was at the top of the violations against women in Egypt.

A BBC Arabic report in April 2013 said that harassment in Egypt constituted 13% of all crimes. The report also said that 60-85% of women in Egypt were harassed, and that this was confirmed by statistics that put Egypt in second place after Afghanistan with regard to sexual harassment.