Mediterranean gas not yet the answer for Turkey's ties with Israel, Cyprus

Michael Leigh of the German Marshall Fund argues the newly discovered hydrocarbon reserves in the Eastern Mediterranean are not agents of peace, but if a political settlement were achieved, both with Cyprus and Israel, these reserves could reinforce the peace with Turkey. 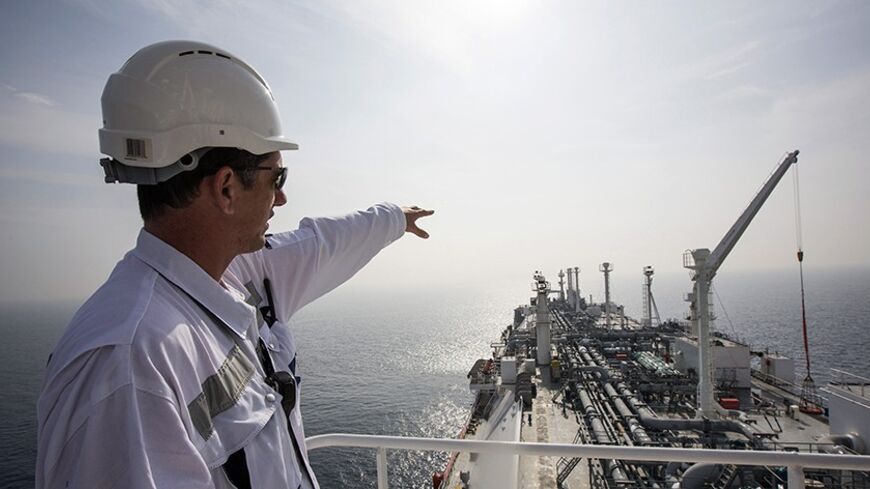 An officer points as he stands on a tanker carrying liquefied natural gas in the Mediterranean, some 10 kilometers (6 miles) from the coastal Israeli city of Hadera, Jan. 22, 2014. - REUTERS/Baz Ratner

US Vice President Joe Biden, on his recent visit to Cyprus, showed the importance the White House is placing on finding alternate energy routes into Europe for the newly discovered deposits of hydrocarbon reserves in the Eastern Mediterranean in an attempt to loosen Europe’s dependence on Russia.

Biden’s May 21 arrival on Cyprus marked the most senior US official visit to the island in more than five decades.

Turkish Foreign Minister Ahmet Davutoglu called Biden’s meeting with Turkish Cypriot President Dervis Eroglu a “historic step,” providing ample encouragement for a fair and just settlement of the Cyprus issue. “Biden’s message, which demonstrates an equidistant approach to the parties, is positive, according to us,” Davutoglu said May 23.

To what extent will the discovery of gas in the Eastern Mediterranean play a role in progress on the Cyprus problem, or on efforts toward a Turkish-Israeli reconciliation? After all, Israel’s Leviathan and Tamar offshore natural gas fields are greater in amount and depth than Cyprus’ Aphrodite and Block 12 reserves.

The underlying assumption is twofold: that Turkey will, for the foreseeable future, have a ferocious demand for gas to feed its economy, and that Turkey envisions itself as an energy transit hub between Central Asia, the southern Caucasus and Europe. In this context, the Eastern Mediterranean gas is very attractive to Turkey, regardless of its amount and regardless of whether it could really provide an opportunity to free Turkey from dependence on Russian and Iranian imports.

Michael Leigh, of the German Marshall Fund and a former EU Commission director-general for enlargement, told Al-Monitor, “This assumption can be challenged on economic grounds before you come to any political issues which are at stake.” Leigh wondered whether Turkey would position its policy on these highly political questions regarding the hydrocarbon deposits in Cyprus and Israel.

Leigh began his argument questioning Turkey’s future demand for gas. “This very much depends on the growth rate of the Turkish economy. Certainly, if you project the kind of growth rates that Turkey has enjoyed over the last decade, you might conclude that Turkey needs to add to its energy supply from any sources whatsoever,” he said. “However, growth has now slowed down tremendously in Turkey. It is very hard for us to project forward and to know what that demand will be in the future.”

Turkey has a number of other sources of gas that are far greater in scale than what might ever be available in the Eastern Mediterranean, said Leigh, with Russia at the top of the list. “Of course, Turkey has an interest in the European Union diversifying away from Russia to some degree,” he said. “But there is no way the Eastern Mediterranean (gas) could make a significant dent in the 60% of gas Turkey is currently buying from Russia. Also, Turkey can look to Azerbaijan and to Iran as important sources of gas.”

Leigh also puts a big question mark over the price issue. “It is still too early to say what price either Israel or Cyprus will be ready to sell gas to Turkey. But costs in Eastern Mediterranean are rather high,” he said. “And it is very far from certain that Turkey will be ready to pay the price that the companies in the Eastern Mediterranean would need to get a decent return on their investment. There is all that by way of uncertainty.”

A prominent source in the Turkish Energy Ministry said Turkey is not concerned a bit about any of the above. “There are not enough deposits of hydrocarbons in the Aphrodite gas field or Block 12, but the Greek Cypriots remain hopeful for coming up with new discoveries. Speaking for now, though, it is not feasible for any investor to spend the money on infrastructure to bring the hydrocarbons to the surface,” the official told Al-Monitor.

“To us, it is their problem whether they find additional reserves or whether they want to export these hydrocarbons at any given time. If they do want to export them, however, it is clear that Turkey is the best route and therefore they will realize that it is also in their best interest to find a justly negotiated settlement of the Cyprus issue.” He added, “When their politics come to this realization, we will be happy to sit down and talk about it in detail.”

So far, the scale of discoveries in Cyprus has been considerately below expectations, making an investment for a floating liquefied natural gas (LNG) plant out of question. Leigh said that Noble energy, TOTAL and ENI are drilling to find new gas deposits, and stressed that building floating LNG plants is a costly investment. “For an LNG plant to be commercially viable it needs two trains (liquefaction facilities). … One train LNG plant costs $6 billion. Two trains cost $9 billion and three trains cost $12 billion,” Leigh said. “And to get a good economic return, you really need these two (trains). So, the court is out as to whether Cyprus is going to find sufficient quantities in order for the export options to be viable. The other main idea as to how Cyprus could have enough quantity to justify export infrastructure is by joint monetization with Israel, which has been discussed a great deal. The Cypriots hope very much that the Israelis will agree that the gas from the Leviathan field that should be on stream in 2017 should be sent to Cyprus.

"And if you pull Cypriot and Israeli gas (together), there will then be sufficient quantity that will interest energy investors. Until now, Israelis have shown no interest in this. Their famous report from an intergovernmental committee — now a year and a half ago — strongly advises that Israel should retain the control of its own gas. And maybe much further down the road, people may think about this.”

Leigh was highly doubtful whether Turkey would be moved to take a more forthcoming position on the Cyprus question due to energy issues, especially with Turkey's prospects for other energy imports.

As for Israel, although there is word in the Ankara beltway that Turkey’s Energy Minister Taner Yildiz is courting Davutoglu for a speedy reconciliation with the Jewish state, all bets seem to be going south, making normalization an unrealistic expectation for now. Further signaling that all bets are off, on May 26, an Istanbul court ordered the arrest of four former senior Israeli military officers who the court believes are ​directly responsible for the deaths of 10 Turks who were aboard the Mavi Marmara in May 2010. This political conundrum certainly prevents the energy talks from moving forward between the two countries. Yet, there is no doubt that the pipeline from Israel to Turkey will be much less expensive than a floating LNG plant.

“Because of the hostility of the Turkish government to Israel, Israelis would not want to put all their eggs in the same basket in exporting its gas. What happens if Turkey does what Russia did, like turning off the tap one day?” Leigh said. “Talking to senior officials in Israel, they seem to take the view: If Turkish companies are ready to make the investment, run the risk, they are not going to block it.”

Israel’s immediate priority seems to be exporting to neighboring countries such as Jordan, Palestinian lands and, possibly, Egypt. In other words, the companies concerned are far from decided whether exporting to Turkey is feasible.

Leigh said there are two possible routes for a pipeline from Israel to Turkey. One is from Israel through the Lebanese Exclusive Economic Zone (EEZ) and the Syrian EEZ, and the other is through the Cyprus EEZ. “As far as the law of the sea is concerned, a coastal state does not have the right to veto a pipeline passing through its EEZ, but it has to approve the route that the pipeline takes. So, de facto it provides a veto,” Leigh said.

This means that Lebanon and Syria have de facto veto rights on Israeli gas exports to Turkey. It looks unlikely for now that companies would run the risk of this route, given events in Syria and Lebanon. Therefore, the Cyprus EEZ route would be the only route they would consider, and the Cyprus government would have to approve.

In sum, Leigh does not consider the new hydrocarbon reserves to be an agent of peace-building efforts in the region. “If there is a political breakthrough, either on Cyprus or on Israel, the energy cooperation can reinforce it. … Clearly, the pipelines will create a new common interest, but it is not the motive (to enforce these countries to settle their score and finally make peace). Once they settle their political differences, it will reinforce the peace,” he said.

According to Leigh, the more convincing reason as to why Turkey might be interested normalizing its relations with Israel is the following. “When relations between Israel and Turkey were close, there was a tremendous area of military cooperation. The Israeli air force had used Turkish airspace for its exercises, and they in return provided transfer of military technology,” Leigh said. “Now, Israel has switched its military cooperation to Cyprus and Greece. Turkey and Greece still have their issues, and, obviously, the Cyprus issue is unresolved. This is a much greater national security threat to Turkey than this energy issue.”

Even if this is the case, in the words of an Israeli diplomatic source, “Turkey is quite an unpredictable partner for us under (Prime Minister Recep Tayyip) Erdogan’s leadership, and we have no interest to be part of Turkey’s domestic politics, at least up until the presidential elections in August. We will see what comes after then."