The Gulf dispute between Saudi Arabia and Qatar is further straining Yemen’s already fragile stability, as both states vie for greater influence in the country. 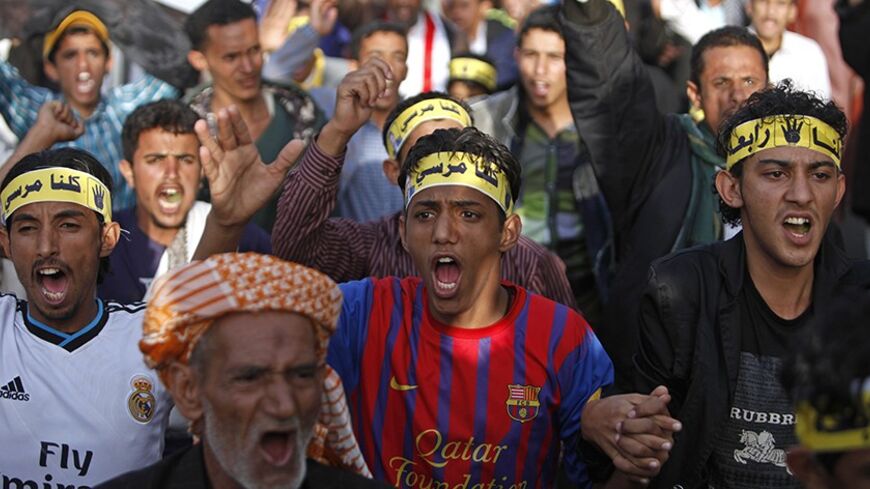 Pro-democracy protesters, some of whom belong to Yemen's Muslim Brotherhood, and are supporters of Egypt's ousted President Mohammed Morsi, shout slogans as they demonstrate to demand that Yemen's former President Ali Abdullah Saleh be put on trial, in Sanaa, Sept. 25, 2013. -

A poor and fragile country like Yemen cannot make independent decisions or escape the effects of the many disagreements around it. While Yemen did not withdraw its ambassador from Doha — unlike Saudi Arabia, the United Arab Emirates and Bahrain on March 5 — it should not be read as an endorsement by Yemen of Qatar’s policies. Equally, Yemen did not criticize the Gulf action against Doha and considered it a matter that concerns only the countries in question, but that does not mean that those countries are satisfied with Sanaa, despite their warm relations. The Gulf dispute remains a matter of importance for Yemen, given that the countries have great influence inside it.

For years, Yemen was prey to the differences of its sisterly Arab countries. The matter has worsened since the outbreak of the Arab Spring and the disagreements among Gulf money capitals with strong influence in Yemen, especially Riyadh, Doha and recently Abu Dhabi. Saudi Arabia and Qatar have been fighting a fierce war of influence over Yemen since 2011. The main dispute was over the Muslim Brotherhood, which has widespread activity in Yemen. The Brotherhood’s Yemen branch, Islah, is a prominent political player on the Yemeni scene. Riyadh accused Qatar of supporting this organization, which it recently added to its list of terrorist movements. While Qatar supports the Muslim Brotherhood, the once close relationship between Islah and Saudi Arabia has sharply deteriorated since the Arab Spring. Saudi Arabia also accuses Qatar, along with Iran, of supporting the Houthis with the aim of harming the kingdom. Riyadh fought a brief war with the Houthis in 2009.

This scene has greatly confused Sanaa’s politicians and diplomats. What position can Yemen take in the current Gulf dispute? And what should Yemen think of the relationship between local Yemeni parties and movements on the one hand, and regional powers on the other?

Yemen’s rule is fragile. The presence of several open battlefronts on the ground between local factions and regional powers makes Yemen’s options extremely limited. Yemen sometimes limits itself to accusing Tehran of meddling in Yemeni affairs, because Yemen knows about that meddling and can see its manifestations. Criticizing Tehran is not as dangerous as adopting mutual accusations among regional parties about their involvement in Yemeni affairs. Indeed, criticizing Tehran is probably the matter that the Gulf states will look positively on, in varying degrees.

Yemen’s financial ties also hinder its political maneuverability as they are mostly restricted at the regional level to Riyadh, Doha, Abu Dhabi and Kuwait. Yemen’s donors have pledged more than $7.8 billion in aid and loans to Yemen since 2012, but less than $2.2 billion has actually been transferred, including a $1 billion deposit from Saudi Arabia in the Yemeni Central Bank. Out of the $7.8 billion, Gulf Cooperation Council countries alone pledged more than 55%, and Saudi Arabia pledged the highest amount at $3.25 billion. Thus, Yemen cannot afford to take positions that might anger one of these capitals.

Saudi Arabia informally supports tribal and religious forces in Yemen, either through its embassy in Sanaa or directly through Riyadh. But changes in the regional power balance have moved Islah from Saudi’s circle of allies and beneficiaries to the circle of enemies.

The relationship between the Muslim Brotherhood and Yemeni tribes on the one hand, and Saudi Arabia on the other, is fateful. This relationship has deep and complex interests and Riyadh used to be able to tip the power balance in its favor.

But Doha is meddling in Saudi Arabia’s hypersensitive files in Yemen, including the issue of Yemeni labor. Riyadh deported tens of thousands of Yemeni expatriates after adopting a new labor law that was passed in November 2013. More are being deported: as many as 12,500 expatriates through the airport in Sanaa alone in January-March.

Qatar, however, has announced that it will open its doors to Yemeni labor and ordered that Yemenis residing on Qatari soil be treated like Qatari citizens in terms of access to education and health. Whatever the justifications, Riyadh’s actions have earned it widespread popular anger in Yemen because the actions happened at a time when Yemen is in a critical state.

Yet, regarding the official and popular aspects one cannot compare Yemen’s links to Saudi Arabia, in terms of interests, with those it has with Qatar. Nearly 2 million Yemenis  remain in Saudi Arabia, which is one of the most prominent donors to Yemen. Qatar still retains the ability to manipulate Yemeni issues.

In late November 2013, Qatar pledged $350 million for a trust fund to compensate southerners who say they were unfairly dismissed from public service. The fund is separate from the $7.8 billion donors already pledged.

Yemeni President Abed Rabbo Mansour Hadi is currently hostage to the agreements and disputes between the Gulf states. He now stands powerless and prefers to keep quiet, especially about Yemen’s most sensitive issues.

The Yemeni conflict is being run from outside its borders and is funded by regional states, all of which declare their support for the stability of Yemen and officially deny meddling in its internal affairs, while their unofficial actions sing another tune.

On March 31, Hadi accused Iran of supporting the Houthis in the north and the Southern Movement in the south, but he extensively praised Riyadh’s efforts and its support for Yemen without accusing or praising Doha.

Yemen is a step away from total dependence on the wishes of the region’s rivals and is heading for disaster, as occurred in the past when Yemen was the victim of a regional agreement in 1990 after it refused to support the Gulf War against Saddam Hussein, resulting in the expulsion of more than a million Yemeni workers from Gulf states.

There is nothing new in the power dynamics in Yemen, and the great influence richer Gulf states have in it. That it is becoming a front line in an intra-Gulf dispute only adds another layer of complexity to an already complex, unstable political environment.