Egypt celebrated the liberation of Sinai from Israeli occupation on April 25, but Sinai locals, who feel neglected by the central government, have little to cheer about. 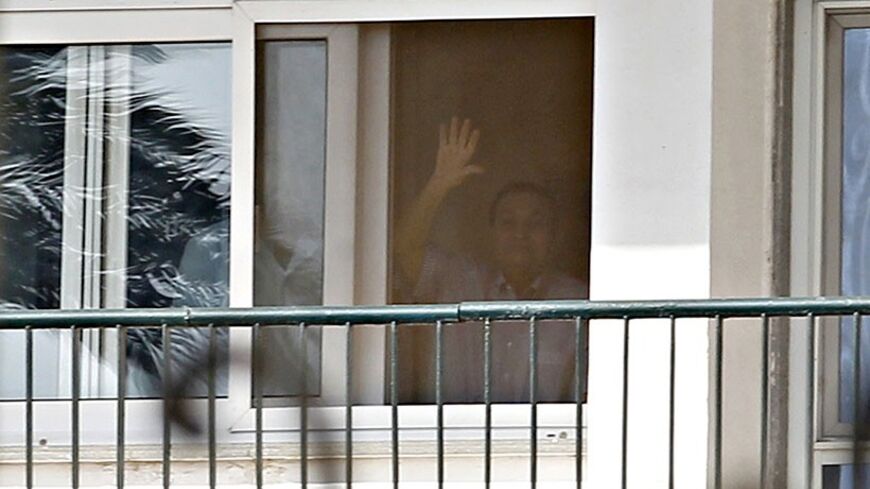 Former Egyptian president Hosni Mubarak waves from his room during a celebration by his supporters of the 32nd anniversary of the liberation of Sinai in front of Maadi military hospital on the outskirts of Cairo, April 25, 2014. - REUTERS/Amr Abdallah Dalsh

NORTH SINAI — “April 25, the anniversary of Sinai’s liberation. One of the days that I hate most in life.” These are the words Sinai activist Ahmed al-Ghoul posted to his Facebook page to expressed his deep-felt anger about the transformation of the anniversary “of the liberation of the Sinai Peninsula from Israeli occupation” into a big lie, as he put it. From Ghoul's perspective, the government and media use the anniversary as an opportunity to disseminate fictitious figures involving billions of Egyptian pounds and yearly statements on the supposed development of the Sinai.

The population of Sinai is less than 500,000, which is less than 1% of the Egyptian population. Its inhabitants live on about 6% of Egypt’s land mass — the peninsula is three times the size of the Nile Delta region. Sinai suffers from marginalization and poverty as a result of neglect by the central government. According to the Social Fund for Development's 2013 poverty map, poverty afflicts more than 45% of its inhabitants.

There has been a great deal of talk about developing the area since the release of the planning document titled "The National Project for the Development of the Sinai" in September 1995. The Egyptian parliament approved the project to run until 2017, with the aim of providing assistance to the Sinai in the amount of 70 billion Egyptian pounds [$20.5 billion at the time].

Sinai researcher Mustafa Sangar told Al-Monitor that despite such a plan, the Sinai is only remembered during national events surrounding its liberation. “Talk about mega-projects for the development of the Sinai is only banter aimed at the inhabitants during national ceremonies, when the situation deteriorates in Sinai or in the context of electoral programs during presidential and parliamentary elections. Otherwise, there is nothing worth mentioning except for marginalization and neglect,” said Sangar.

He further stated, “There are still major shortages in the provision of citizens’ essential needs. It is inconceivable to talk about development worth billions of pounds on a territory devoid of adequate infrastructure. I, as a resident [of the Sinai], face great difficulties obtaining water, proper medical treatment and a good education. Furthermore, the roads are in pitiful shape, the electric grid is decrepit, and all these essential needs are unavailable. What good is it to talk about development worth billions of pounds in populist speeches and pretend celebrations by the state in the media?”

Suleiman Eid is a farmer from the village of al-Shuhada, in the al-Salam Canal project zone, 70 kilometers [43 miles] west of al-Arish, the capital of the North Sinai governorate. Eid told Al-Monitor, “The dream of developing the Sinai via supplying it with water that would bring peace to its lands was the greatest of national projects ever promoted by successive ruling governments, from that of President Hosni Mubarak, to the regime of President Mohammed Morsi and up until this day. But, the reality on the ground has been much different, with Sinai development remaining ink on paper, a topic for deliberations behind closed doors and media statements.”

Al-Monitor accompanied Eid to determine the accuracy of public and media statements concerning the al-Salam Canal made during official ceremonies. What we found was dusty land and dried-up trees that had long ago lost their leaves. Suleiman explained that the latter had been olive trees and that what is now the desert landscape that swallowed his village had once been covered with lush greenery.

Recalling what his land looked like three years ago, Suleiman told Al-Monitor, “Olive harvest season was approaching, but they [the government] shut off the canal water supply, and everything was lost. The al-Salam Canal project was a source of hope for the people of the Sinai. But in 2010, it was transformed into an impervious dam that deprived their lands and crops of water, once the government decided to shut off the flow of water and prematurely ended the completion of the project. In 2000, Mubarak had promised to grant us ownership of lands that we cultivated, but 10 years later, they cut off the water and left us to rot in this desert hell.”

The same type of neglect exhibited toward the al-Salam Canal also afflicted the Ismailia-Rafah railway project. The government completed the first phase in November 2011. This entailed laying tracks that extended for 100 kilometers [62 miles] from the al-Ferdan Bridge in Ismailia to Bir al-Abed in northern Sinai. After the government abruptly halted work several months later, this vital project fell victim to thieves, who calmly stole the iron tracks without anyone stopping them, according to testimony by locals.

A report issued in 2010 by the North Sinai governorate and obtained by Al-Monitor assessed the project’s current status, stating, “Despite the large expenditures allocated for the project, no developmental return was noted so far on the lives of the region’s inhabitants, particularly in Zamami, Rabia and Bir al-Abed.” The report also noted “a delay in the start of works in the al-Sir and al-Qawarir (central Sinai) regions, despite the fertility of land there and its importance to national security.” While official reports are frank, they fail to provide clear answers to justify halting the al-Salam Canal project and most other national projects in Sinai.

An employee at the Information Bureau in North Sinai governorate, who asked to remain anonymous for safety reasons, told Al-Monitor, “A mystery has puzzled me throughout my years of service in North Sinai. The al-Salam Canal project cost the state 4.8 billion Egyptian pounds [$685 million]. Why has the government, to date, refrained from distributing the land to the people? The state did distribute land in al-Tineh and al-Kantara East [part of Ismailia and Port Said], but no land has been apportioned in the Sinai thus far.”

The employee also asserted, “Confusion in government decisions contributed to disrupting many national projects in Sinai. What occurred in relation to the al-Salam Canal project is proof of that. At the onset, the Ministry of Irrigation was responsible for the canal and its outlets’ infrastructure works, while the Ministry of Agriculture was responsible for the distribution of land. In 1994, Presidential Decree 103 was issued to establish the North Sinai Development Authority. Then, in 2002 another presidential decree was handed out to convert the authority into a holding company, followed by a third presidential decree in 2006 to dissolve the holding company and restore project supervision to the Ministries of Irrigation and Agriculture.”

On the April 26 episode of “90 Minutes,” broadcast by the Al-Mihwar satellite channel, former Prime Minister Kamal Ganzouri stated, “The administrations of President Mubarak did not want the Sinai to be settled with people. I tried to endeavor toward moving people from the Delta to the Sinai and develop the peninsula, but Israel refused to allow the presence of large human concentrations in the Sinai.”

In contrast, Gen. Murad Muwafi, former head of Egyptian intelligence, stated in the same episode, “Talk about halting the development of the Sinai because of Israel is drivel and illusions spread by the enemies of the regime.” Yet, Muwafi, who served as governor of North Sinai from January 2010 to January 2011, also indicated that he was unaware of the reasons that brought a halt to the Sinai's development. “The Sinai is governed by magic,” said Muwafi.