Are preschoolers ready to learn about the Holocaust?

The new initiative by the Education Ministry to introduce the Holocaust into the preschool curriculum has provoked a heated debate as to whether its motives are educational or nationalist. 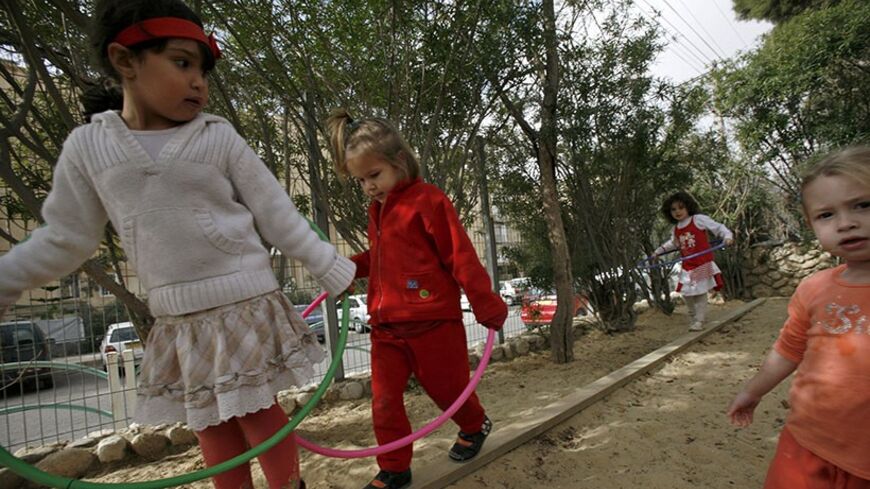 Children play at the Hagar preschool and kindergarten in the southern Israeli city of Beersheba, Jan. 29, 2009. - REUTERS/Gil Cohen Magen

In an interview with the Globes newspaper on April 27, author and Holocaust survivor Uri Orlev, who wrote some of the best-known works of children’s literature about the Holocaust (including "The Island on Bird Street" and "Run, Boy, Run") was asked how to explain the Holocaust to children. “When my son was seven,” Orlev responded, “he asked me, ‘How did you escape from the Germans?’ I didn’t know how to explain it to him.” After much thought, he responded to his son with an allegory about life and death, which he originally heard from a Polish girl.

Orlev is not a great supporter of Israeli Education Minister Shai Piron’s new curriculum to begin teaching the Holocaust in preschool. “It’s not wise,” he said in the same interview. “He got a bit carried away. How can anyone tell a story like that to someone so young?”

There has been a lot of antagonism with this curriculum, as would only be expected. It has also revealed much of the dark humor that so many Israelis use to cope with the topic of the Holocaust. “We may have a big green car, / but it doesn’t go very far. / We cram all the Jews in the trunk in the back, / and go for a spin with deadly gas till they hack,” wrote one web surfer, cynically paraphrasing a well-known Israeli children’s song (about big trucks carrying Tnuva milk all over Israel).

Others were less amusing: “If they teach my grandchildren about the Holocaust in preschool, then I’ll just keep them home. … They shouldn’t grow up as Jews with a Diaspora mindset, scared of anti-Semitism and hiding in Israel out of fear and hatred of the goyim [non-Jews],” wrote one worried grandmother.

This isn’t the first time that Israeli society has become so agitated and emotional about teaching the Holocaust, which is a mandated subject in the curriculum by the State Education Law. In an article published by Dr. Nili Keren about the battle over Holocaust education in Israel, she claims that the special status that Israel apportions to the subject of the Holocaust has made teaching it an especially difficult and complicated task, and one not always guided by professional considerations. She also argues that the teaching of the Holocaust has occasionally turned into an arena for an ideological and political battle over the event’s significance to Israeli society.

The Holocaust wasn’t even taught in Israeli schools until the 1960s. It was the capture and trial of Nazi war criminal Adolf Eichmann (1961) that changed the consciousness about the Holocaust within Israeli society, including the education system, that began to open up to the issue. But at the same time, there were opposing voices. In the early 1960s, at a conference on the Holocaust in the Israeli education system, one of the participants who is quoted on the Yad Vashem Holocaust Museum website declared, “Only one thing is legitimate: silence.” Professor Yehuda Elkana, himself a Holocaust survivor, expressed the same opinion in a controversial editorial he published in 1988 in the Israeli daily Haaretz, “The Need to Forget.”

Tensions ran high again when Israeli high school students began making voyages to Poland in the late 1980s. Some claimed that the participants were still too young to be exposed to the horrible sights at the extermination camps. Others claimed that the ''March of the Living'' program was motivated by political and nationalist interests. On the other hand, there were those who argued that the trip to Poland was a formative experience for young people, and that nothing could take the place of a visit to the sites where the Holocaust occurred. By the late 1990s, about a decade after the March of the Living program began, psychological studies that examined the cognitive and emotional impact of the trip on young participants began to appear. These studies found that the participants came to challenge many basic assumptions and dealt with many difficult existential questions.

This kind of impact is frightening to parents of young children. Hila Laviv, the mother of a girl in kindergarten, believes that Holocaust education in preschool will not be objective. Instead, “It will serve to instill in children those same right-wing nationalist values that guide the current Israeli government, or in other words, it will teach them that they should fear other countries, that everyone poses a threat to us and that we have to hold on to the land to ensure that they don’t kill us.”

“It’s fun and it’s easy for them to mock the Ministry of Education as headed by Minister Piron,” wrote journalist Ofer Aderet of Haaretz about opponents of the Holocaust curriculum. “But this curriculum isn’t just another Facebook initiative by the Yesh Atid gang of ministers. It is the result of an examination conducted by a joint committee made up of the Ministry of Education and Yad Vashem’s International School for Holocaust Studies. They have serious people there. There are internationally renowned experts, including educators, counselors and psychologists, whose primary focus is this very issue.”

Dr. Arie Kizel, an education philosopher of the faculty of education at Haifa University, agrees that this public response to the new curriculum (as is its response to almost any new attempt to cope with the issue within the education system) is the result of collective hysteria. “Discourse about the Holocaust in a pedagogical context is political. The right-wing nationalist side of the political spectrum believes that it is necessary to teach more and more Jewish identity, and they use the Holocaust to achieve that objective. On the other side, there are those on the radical left who are bothered by the fact that the society is becoming more right wing and more nationalist, and therefore call for freeing ourselves from the Holocaust entirely. Both sides are very disconcerting.”

According to him, Israelis have a hard time looking at Holocaust education objectively and are quick to respond by way of national emotions. Those on the left tend to oppose “indoctrination in preschool,” while those on the right are quick to exploit this new possibility to increase nationalist sentiments among three- and four-year-olds.

For most Israelis, this internal conflict within the country is also a very personal conflict, explains Deganit Ben Nissan, the senior psychologist at the Institute for Child Development at the Schneider Pediatric Center. “As parents, it scares us to have our children exposed to that content. We want to protect them from that terrible information. On the other hand, as the years pass, we are increasingly worried that the memory will be lost to us as a people and a nation, and we feel an even stronger need to preserve it.” In other words, the State of Israel is just like Israelis themselves: caught in a never-ending conflict between the desire to stop dealing with a painful past and the imperative to remember and never forget.

Kizel may call himself a harsh critic of the Ministry of Education, but in this particular instance he supports the curriculum. ''It is naive to think that children in preschool aren’t exposed to the Holocaust,” he says. “They know about it. They are familiar with it, and the first thing they actually discover about it is all the worst horrors, because that is what captures their attention.” According to him, young children internalize the public mood on Holocaust Memorial Day. They hear the siren, and they see their parents suddenly freezing for a moment, with no explanation as to why. “Children learn about the Holocaust from age zero anyways. The Holocaust exists in our lives, and we mustn’t ignore it,” Kizel continues. “The Ministry of Education rose to the challenge of putting order into how we deal with the Holocaust and prepared a curriculum adapted for every age group. The educational system must deal with the Holocaust, and from what I see, that is what the new curriculum does.”

In fact, educators are of the opinion that the new curriculum instills some order in the current chaos. Preschool teachers had no choice but to help the youngest children deal with the topic of the Holocaust, but they did that as an independent initiative, with no direction and no help. This often instilled a sense of confusion and fear among the children.

Ben Nissan, on the other hand, is less enthusiastic. “This curriculum is necessary on a national, cultural, narrative level, and not on a psychological level. All in all, young children really aren’t that exposed to the Holocaust, and the Holocaust isn’t very present in their lives. Holocaust education may not result in trauma or severe scars, but preschool is still too young to deal with the topic. Children have a hard time absorbing the significance, and even on the level of language skills, they don’t yet understand certain terms and concepts. They give terms the wrong meaning, and in many cases, this becomes a source of fear. Dealing with the issue should be limited as much as possible at the preschool age, both in terms of the time allocated to it and in terms of the content. We should focus on the one thing that is really present in the lives of the children, which is the siren.”

In contrast, the staff of the Ministry Education argues that the current curriculum is intended to do exactly that, by handling only the most necessary issues in a delicate and sensitive way, in response to the children’s inevitable exposure to them.