Turkey’s Ambassador to the Organization for Security and Cooperation in Europe (OSCE), Tacan Ildem, says the May 11, 2013, Reyhanli attack was carried out by al-Qaeda. 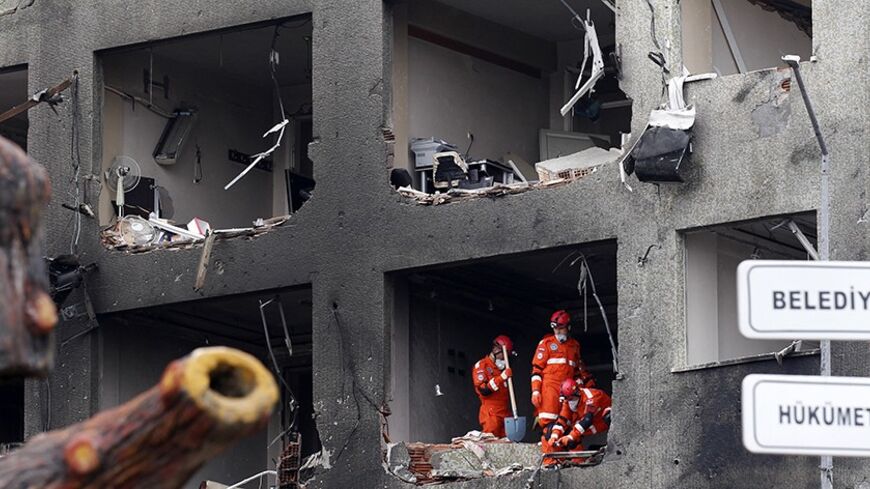 Search and rescue team members work at one of the scenes of the twin car bomb attacks in the town of Reyhanli of Hatay province near the Turkish-Syrian border, May 12, 2013. - REUTERS/Umit Bektas

On May 11, 2013, Reyhanli, a Turkish town on the border with Syria, was attacked with twin car bombs, leaving behind an official toll of 52 deaths and 146 injuries.

But the mystery of who attacked Reyhanli, marking the worst terrorist attack this country has ever seen, remained controversial. Here is why:

On May 25, 2013, Turkish Prime Minister Recep Tayyip Erdogan accused the Syrian regime of being behind this attack. Also, referring to a visit by a group of main opposition Republican People’s Party (CHP) deputies to a Damascus meeting with Syrian President Bashar al-Assad, Erdogan said in an accusatory tone, “We have documents in our hands that clearly prove that those who took the CHP members to Assad are those who were directly involved in the Reyhanli attack.”

The indictment about this attack also pinpointed that THKP/C Acilciler (Urgency Group, a splinter faction of the Turkish People’s Liberation Party/Front which has had no known activity for the past two decades at least), which supposedly has direct connection to the Syrian intelligence service Al-Mukhabarat, carried out this attack. The Reyhanli indictment contends Mihrac Ural, the leader of the Acilciler, organized the attack with Syrian intelligence. They were initially planning to carry out this attack in the capital, Ankara, roughly 700 kilometers (434 miles) from this border area. The trial is still pending.

Erdogan also talked about the late May-early June Gezi Park protests as a “continuation of Reyhanli.” The prime minister so far has not publicly blamed anyone other than the Syrian regime to be behind this attack.

With the Armenian Bar Association’s letter to US President Barack Obama on March 25, the Armenian community is directly accusing Turkey of being responsible for the radical Islamists’ attack in the village of Kassab in Syria, where there is a significant Armenian population. On top of that, Armenians are preparing to mark the 99th anniversary of the Armenian genocide on April 24 and Turkey seems to be changing its official story about who is responsible for the Reyhanli attack.

Speaking at the 992nd meeting of the Permanent Council of the Organization for Security and Cooperation in Europe (OSCE) on March 27, Turkey’s Ambassador Tacan Ildem was the first Turkish official to state that the Reyhanli attack was carried out by al-Qaeda: “More recently a massive bomb attack in the Reyhanli town center, carried out by al-Qaeda elements operating out of Syria, caused 52 deaths and 146 injuries,” he said. Ildem was responding to the commentary made by the Armenian Ambassador Arman Kirakossian at the OSCE meeting.

“The Armenian delegation expresses its grave concern over the last escalation of the situation in north-western Syria, around the ancient Armenian-populated town of Kassab. In the last few days, Kassab was attacked from the territory of Turkey by al-Qaeda-affiliated terrorist groups. The brutal cross-border attacks, which also targeted the civilian population, resulted in evacuation of the local Armenian population to safer areas,” Kirakossian said. “The extremist groups occupied the town and desecrated Kassab's Armenian Apostolic and three Armenian Catholic churches. We call on Turkey to take immediate and effective measures to prevent use of its territory by the terrorist groups to conduct attacks on Kassab.”

Ildem responded by arguing that Turkey is also coming under al-Qaeda attacks. “I can certainly agree on the degree of concern expressed by my distinguished Armenian colleague. Nonetheless, to allege before the Permanent Council that Kassab is under attack from al-Qaeda elements operating out of Turkey is nonsense. As stated in a press release issued yesterday by my ministry, we reject it utterly. Turkey has been a target of al-Qaeda, not a base of operations for it,” Ildem said. “Let us not forget for even a moment that one of the four major al-Qaeda attacks took place in Istanbul [in November 2003]."

He continued, "Merely days ago, al-Qaeda operatives having infiltrated Turkey from Syria opened fire on security officials at a roadblock in the province of Nigde, close to Ankara. They killed one gendarme, one police officer and one civilian passerby. The culprits are now under arrest, awaiting trial. Their interrogation led to an operation in Istanbul where, again, gunfire was opened on law enforcement officers, wounding three.”

Ildem added, “Yet another truth on this matter is that Turkish authorities, in view of the gravity of the situation on the ground, have formally approached the relevant UN organizations to inform them of our preparedness to provide a shelter facility in the Mardin province, ready in case an urgent evacuation of the civilian population in Kassab takes place. In other words, diametrically opposed to what has just been claimed, Turkey has offered a helping hand to the population of Kassab, indiscriminate of their ethnic or religious origin, including the Syrian Armenians.”

In sum, Turkey needs to clarify its story about who attacked Reyhanli. The truth surely comes in time, but which one of these stories is Turkey’s truth? Ildem could have easily made his argument without citing anything about the Reyhanli attack. Why did he make such a controversial statement, challenging not only the indictment of the Reyhanli attack but also the country’s strong prime minister? These are questions that deserve answers, because the Turkish people have a right to know who killed 52 of them in this country’s worst terror attack.

Addressing the Turkish news media on April 4 for the first time after the Justice and Development Party's (AKP) triumphal Sunday local election, however, Erdogan claimed that he owed the success at the polls to his government’s foreign policy. “We surely got many messages from the poll results, but the most important is the support extended to our foreign policy,” Erdogan said. “Turkey’s peaceful, negotiation-oriented foreign policy in defense of the rights and the rule of law has once again received full credit from our nation.”

Erdogan also declared on March 31 in his victory speech after the election, “Syria is now in a war against us.” Yet, it is worth noting that a March 25 audio leak of Turkey’s top officials’ conversations suggested that they were arguing about staging an attack from Syria, making war inevitable.

All that being said, there certainly is serious tension at the Syrian border, but Turkey is in no war with Syria. When speaking about anything related to war, it is crucial to get the facts right. Let’s start, therefore, by asking Turkey’s prime minister who carried out the Reyhanli attack, and if it really was al-Qaeda, why he chose to frame the country’s main opposition as the enemy.