The latest Fatah-Hamas reconciliation agreement has yet to convince the Palestinian public that this is the deal that will end the internal division. 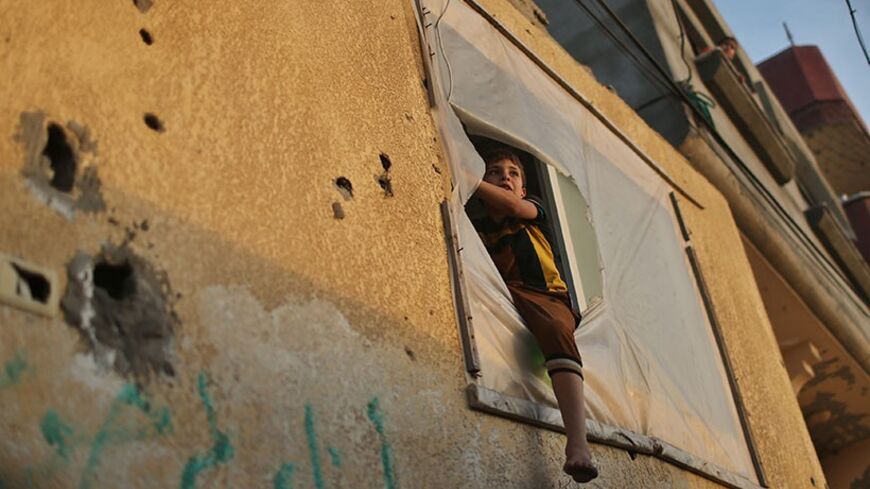 A Palestinian boy looks out through the window of his house at Shati refugee camp in Gaza City, April 22, 2014. The Palestine Liberation Organization (PLO) sent a delegation to Gaza to negotiate unity with Hamas. - REUTERS/Mohammed Salem

RAMALLAH, West Bank — It seems that the ceremonious pictures of the Palestinian reconciliation agreement between Fatah and Hamas in the Gaza Strip have not convinced the people, who are accustomed to seeing such imagery every time a similar announcement is made.

Despite the positive atmosphere among the leadership, it seems that the Palestinian street is not optimistic that the reconciliation will happen or that it will last if it does see the light.

Al-Monitor spoke at random to roughly 30 Palestinians in Ramallah about what they thought of the agreement. Most said that the reconciliation will not be achieved, and if it is, it will not last long. The conversations echoed similar sentiments among Palestinians in Gaza.

Asked by Al-Monitor whether he expects the reconciliation to succeed, Mahmoud Mubarak, a restaurant owner in Ramallah, said that while he wishes the Palestinian people would unite against the occupation, “We are not pinning high hopes on the two sides because two roosters cannot live in the same coop, and the two sides are fighting over power and positions.”

Asked why he thought so, he replied, “The reconciliation was the only choice for President Mahmoud Abbas because he failed in his negotiations with Israel. He therefore went to Hamas to pressure Israel to get the conditions he wants. I don’t think that Israel and the United States will allow the reconciliation to happen and succeed. I’m not optimistic.”

Mia Munasira, a student at Birzeit University in Ramallah, shared the general pessimism, saying, “This is not the first reconciliation that has occurred. It happened a few years ago. I feel that it’s merely ink on paper. … We hope that it succeeds, and this is the dream of every Palestinian, but in my opinion, no, I don’t think it will succeed.”

Palestinians think the reconciliation will fail for various reasons. Some think there’s no serious desire or sincere intention by the parties to achieve this goal, while others believe that pressure from Israel and the United States will spell its doom. Others think that within the two movements are parties whose interests lie in the split continuing.

A taxi driver in Ramallah who spoke to Al-Monitor on condition of anonymity said that the reconciliation will not succeed because “Israel will make it fail. [The Palestinian sides] wish to reconcile, but there’s a lot of pressure from the United States and Israel on Fatah.”

Actor-comedian Mahmoud Rizk said that without change on the ground, the reconciliation will not succeed. He told Al-Monitor, “The reconciliation will fail unless something practical happens. The political prisoners have not been released, and the institutions that were closed during the split have not reopened.”

Mohammed Robaia, who works as a financial adviser, said he was pessimistic about the negotiations because of “conflicts of interest.” He described the reconciliation as “for show and cosmetic,” telling Al-Monitor, “The fundamental and partisan interests will be an obstacle. It is difficult to solve things this way, because basic and fundamental solutions are needed. … I expect [the reconciliation] to collapse, but I don’t know when.”

In addition to the extreme caution and pessimism on the part of those who expect failure, even those who are optimistic about the reconciliation are cautious. Bassam Ahmed, who works in a pastry shop, told Al-Monitor, “The reconciliation is good for the Palestinian people, and everyone supports it. Hopefully, it will continue. … If they have good intentions, then it will continue, but if they are not sound, then it will not continue. The Palestinian people welcome the reconciliation but are afraid and hesitant because they think it will fail. How many times have they reconciled and it later failed?”

In an opinion poll published April 1 by the Institute of the Arab World for Research and Development (AWRAD), 34% of those surveyed blamed all political parties and factions, including Fatah and Hamas, for the failure of the reconciliation. Meanwhile, 23% blamed outside parties (without identifying them), 22% blamed Hamas alone and 12% blamed Fatah alone.

The poll showed a split over whether a national unity government grouping Fatah and Hamas will be formed. While 50% of those surveyed thought it would happen, 47% believed it will not, while 3% said they did not know.

In an interview with Al-Monitor, the head of the AWRAD center for opinion polls, Nader Saeed, said that the center conducted an electronic survey over the previous two days to measure the opinion of the academic and political elite about the reconciliation. While those results have not yet been published, Saeed said that initial results showed a “high degree of pessimism because of the long history between Fatah and Hamas and because of the real difficulties on the ground for implementing a real and fundamental reconciliation agreement.”

“There are a number of real and outstanding issues that have not changed. Those who are neutral and have interests with neither movement don’t trust Fatah and Hamas, and there is no fundamental change in their agendas and practices on the ground in the West Bank and Gaza. We have seen no real initiatives by the parties to prepare the public for this reconciliation,” he explained.

Saeed added that the popular belief is that true reconciliation does not consist of going to Gaza and raising victory signs, but rather of a deep reconciliation with measures to build confidence and restore unity, which he said were missing. He continued, “So the recent reconciliation agreement came as a shock because it came without preparation, such as clear preparations for the reconciliation by making good faith initiatives and clear practices on the ground. People are not taking the reconciliation seriously because the fundamental issues, such as the security issue, have not been solved.”

On the changes in the public mood during the years of division, Saeed said that when the split happened, most people, according to opinion polls, were optimistic about the possibility of achieving reconciliation and absolutely believed that the split was temporary and would be overcome. But now that optimism has dropped. Those who think that the reconciliation will happen have dropped to 20%, after having once reached 70%, according to Saeed.

For his part, political writer and analyst Jihad Harb told Al-Monitor that the popular mood is skeptical because of the repeated failures of previous agreements and protocols. However, he said that the people hope that the current reconciliation succeeds.

To remove that pessimism, Harb said that the reconciliation should be truly implemented, meaning starting the consultations to form a government and creating an atmosphere of general public freedom, stopping the political arrests, ensuring freedom of movement and allowing the parties in the West Bank and Gaza to move around and deal with public issues free from any pressure.

Palestinians on social media have largely doubted that the reconciliation will succeed, with some mocking the agreement. Some activists have started a Facebook page and a Twitter hashtag to track the number of "Palestinian reconciliations." The Facebook page reached 7,000 followers in the first 24 hours.

It seems that the seven years of division have made ​​the Palestinians cautious in evaluating the seriousness of both parties about a reconciliation whose journey the Palestinians have followed from Riyadh, to Cairo, to Doha, to Sanaa and now to Gaza.