The 15 international treaties signed by the Palestinians have no major effect on Israel. 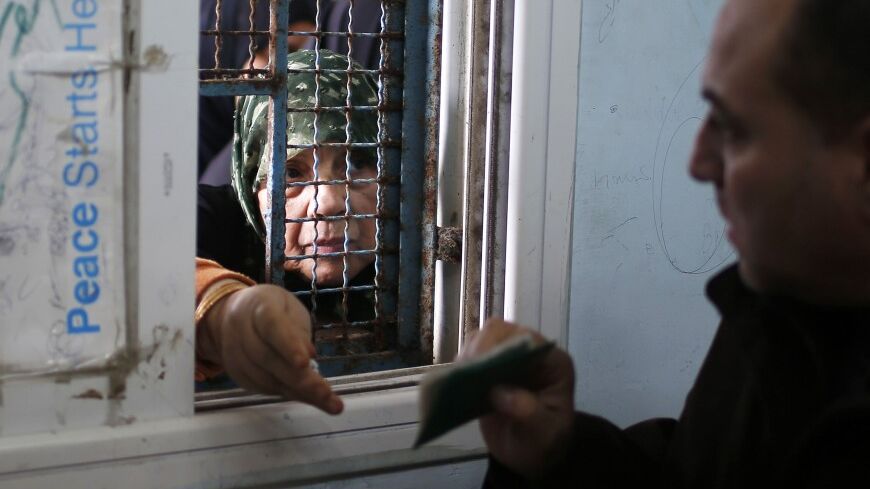 A Palestinian woman presents her ID as she waits to receive food supplies from a United Nations food distribution center in Gaza City, Dec. 19, 2013. - REUTERS/Mohammed Salem

Palestine committed itself in these treaties to various human rights conventions as well as laws of war treaties. International jurists argue that these treaties actually place more liabilities on the Palestinian government and have absolutely no effect on Israel and its status as the occupying power.

Not only were the Israelis upset with Abbas’ decision — which seemingly has little impact on them — but so was the United States, a supposed global champion for human rights.

Human Rights Watch (HRW) was so stunned by what America’s UN envoy Samantha Power told Congress that they issued a statement criticizing the US position. HRW said that the United States should “support rather than oppose” Palestinians joining human rights treaties.

“It is disturbing that the Obama administration, which already has a record of resisting international accountability for Israeli rights abuses, would also oppose steps to adopt treaties requiring Palestinian authorities to uphold human rights,” Joe Stork, deputy Middle East director at HRW, said.

So if signing these agreements has no real impact on Israel, why have the Israelis been so vocal about it?

The answer is political rather than legal. Despite Israeli demands that Palestine must be democratic, Palestine's human rights record does not appear to be on the Israeli radar these days. In fact, Israel seems less concerned if Palestinian security forces violate the rights of Palestinians and acts in a tough way against opponents to the peace process.

The biggest sin of the Palestinian leadership appears to have been the decision to act independently or, in other words, act in the interest of its own people, but without the prior approval of Israel and, to a lesser extent, the Americans.

Israel’s arrogant and paternalistic attitude was reflected in a host of statements by senior Israeli Cabinet officials and a horde of Israeli columnists. Speaking at the start of the Israeli weekly Cabinet session, Prime Minister Benjamin Netanyahu threatened Palestinians that Israel would respond to Palestinian unilateral actions with its own unilateral action. Palestinians scoffed at the Israeli prime minister’s threats, considering that Israel has unilaterally occupied Palestinians territories, encouraged illegal settlement into occupied territories and denied the internationally sanctioned right of return for Palestinian refugees.

One Palestinian blogger aptly wrote that Israel was upset because “the slave raised his head,” listing a number of continued Israeli human rights violations and unilateral acts. “You have tried every dirty trick in the book and failed to crush us during the last five decades, so what’s new?” the blogger El-Said wrote.

Israeli fears might not be specifically concerned with the 15 international treaties that Abbas signed, but with the remaining treaties he has yet to sign. The 63 treaties and UN agencies that Palestine would like to join include the Rome Statute, which allows its signatories to appeal directly to the International Court of Justice at The Hague. Of course, neither Israel nor the United States are signatories of this treaty, and therefore it is highly unlikely that Palestinians, even in such an eventuality, will be able to try Israelis for war crimes against Palestinians. Nevertheless, once joining this important treaty, Israel and its war criminals would be in a much more difficult position, with greater international scrutiny on their behavior in Palestine.

For now, it is clear that Israel’s main problem with Palestinians wanting to make commitments to its citizens are political, not legal.