Parliament to defer election of Lebanon’s next president

The Lebanese electoral session will be a “feeler” to determine the sizes of the various forces. 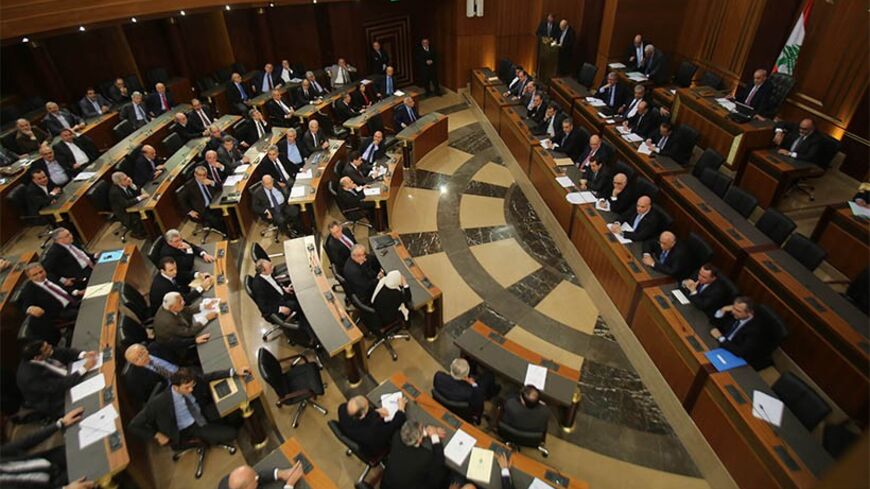 The Lebanese parliament convenes on April 23 in the first session to try to elect a new president. However, the political forces and all external parties know that a president will not be elected in this session.

According to the Lebanese constitution, a parliamentary session to elect a president of the republic must be attended by at least two-thirds of the deputies, i.e., 86 deputies out of 128. To become president, a candidate must win 86 votes in the first voting round of a session and 65 votes in the second round of the same session. But if that does not happen and another session is scheduled, it will be considered a separate session and will require the candidate to win 86 votes in the first round, or 65 votes in the second or subsequent rounds.

Politically, none of the parties to the conflict can gather a parliamentary majority to secure victory in the first round, or even in the second round. Neither party has 65 deputies in parliament. So everybody is confident that the session on April 23 will not elect a president. This session will be a “feeler,” or a first match in the presidential contest.

This session, however, will have important functions. The first is that it will clearly reveal the size of the forces. The team of former Prime Minister Saad Hariri is moving to embrace the nomination of Samir Geagea, the head of the Lebanese Forces party. That nomination is remarkable and will have consequences within the team itself, because it will show how much the components of the alliance are united around a single candidate. It will also show the actual number of votes that this team can gather for its own candidate.

Yet, more importantly, Geagea’s nomination will prevent any subsequent deal between Hariri’s team and its opponent, the Shiites, or even between Hariri and the team of Gen. Michel Aoun.

The Shiites have categorically rejected Geagea’s nomination by placing a clear veto on Geagea’s nomination, even though they are certain Geagea cannot be elected president. That is because of Geagea’s past, whom the Shiite team accuse of being a collaborator with Israel during its occupation of Lebanon, and because he was condemned to four death sentences by Lebanon’s highest judicial body for murder or attempted murder. He was tried when the Syrian army was in Lebanon, and his sentences were later commuted to life imprisonment. He was released from jail thanks to an amnesty law passed by the first parliament elected after the Syrian army left Lebanon.

Geagea’s nomination has cut the road almost completely to any final agreement between Hariri and Aoun, after months of talk about a rapprochement between the two foes, especially after a secret meeting between them in Paris on Jan. 11.

By Hariri supporting Geagea’s nomination, it has become clear that the path to the rapprochement between Hariri and Aoun will result in them returning to their previous conflict or by agreeing on a compromise candidate that is neither Geagea nor Aoun. Yet, Aoun completely rejects the latter. In addition, Wednesday’s “feeler” session will reveal the number of the independent votes on both sides. The session will also show the number of deputies in the bloc of Druze leader Walid Jumblatt.

So it can be said that the Lebanese parliamentary session will have two dimensions: holding the session and the political indicators. On the one hand, the session is expected to be held and its constitutional quorum (86 deputies) will be met. It is certain that no candidate will win 86 votes in the first voting round. After that, the session could close by losing its quorum before the start of the second round (in that case, another session will be scheduled), or another voting round will take place, with no candidate winning 65 votes.

On the political level, the significance of the session is that both parties to the conflict in Lebanon have decided to take the confrontation to the end. Thus, there is likely to be a presidential vacuum at the end of the current president’s mandate, at midnight on May 24.

It will also mean that there will be no agreement between the two sides in the foreseeable future, and that no internal settlement is possible anyway. A settlement to impose a new president would require an external intervention to secure a regional-international equation, at least between Riyadh and Iran, under the sponsorship and initiative of Washington. And that seems to need more time, if it were possible at all.

So on April 23, the quorum will be met, the sizes will be determined, there may be some splits, but no president will be elected. It will mark the start of a relatively long presidential crisis and the start of a waiting period for outside efforts, especially a US initiative.