The deadlock in the politicking over Lebanon's next president has a familiar feel. 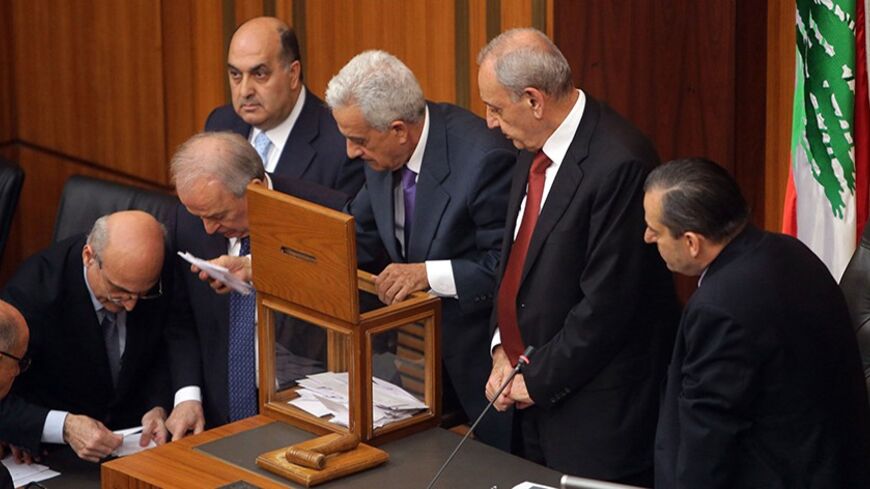 Lebanese members of parliament count the votes after casting their ballots to elect a new Lebanese president in the parliament building in downtown Beirut, April 23, 2014. - REUTERS/Joseph Eid

The Lebanese parliament convened on April 23 to elect a president. The voting was carried out correctly and, as expected, there wasn't a winner. The results of today's session surprised no one.

The March 14 coalition's declared candidate, Samir Geagea, obtained 48 votes from the 124 members of parliament (MPs) present. Druze leader Walid Jumblatt's bloc, which split from March 14 and has positioned itself in the center, obtained 16 votes. The first thing worth noting is that, had Jumblatt not split and had former Prime Minister Saad Hariri and the head of his bloc Okab Sakr (both of whom are outside of Lebanon) attended, March 14 could have obtained 66 votes. This is more than the absolute majority needed to elect a president in the second round of voting.

As for the MPs from the March 8 coalition, they submitted blank ballots. As soon as the first round of voting ended, March 8 MPs left the hall in an attempt to prevent a quorum for a second round of voting. Yet, the curtain came down on the theater, and the prospect of a vacuum seems likely again.

The Taif Accord didn’t change but rather consecrated the habit of the main political blocs agreeing upon the next president before the voting session. The parliamentary vote is just a formality since an understanding has already been reached by the political blocs that speak for their sects.

That’s in form. In reality, an agreement, if it happens, would be regional first and foremost, or at least a settlement among the regional actors on the Lebanese arena. This applies not only to presidents but also to the formation of governments. So, for example, the government of Prime Minister Tammam Salam, which was formed nearly a month ago, was the result of a minimal settlement between Iran and Saudi Arabia through several intermediaries, led by France and the United States.

Today’s question is whether the agreement that produced the government is still there, and if so, whether it applies to the presidency, or whether “electing” a president requires an understanding of another caliber. Such an agreement requires a new debate and rounds of negotiation — some secret, some declared.

Today, nothing on the horizon indicates a consensus on the next president. Of course, the “president makers” — meaning, the regional powers of concern — claim to support the constitutional institutions, especially the presidency, and say they stand at the same distance from all candidates. Yet, the reality of things is that the settlement has either not ripened or it did happen but requires time to be revealed.

Electing a president requires a quorum of 86 deputies. This practically means that the March 8 and March 14 forces have accepted to not boycott the session. A boycott of the session will not occur in two cases: If there’s a settlement, in which case, all would vote as a formality; or, if one side is certain the opposing side will not get an absolute majority (65 votes). If they are uncertain whether the opposition will win, they would prevent a quorum.

The March 14 alliance, which includes in its ranks several natural candidates — such as Amine Gemayel, Boutros Harb and Robert Ghanem — faces two challenges today: maintaining its cohesion and electing a candidate from its ranks or an acceptable compromise candidate. Geagea nominated himself in an open and honest manner and according to a clearly defined electoral program that highlights sovereignty and reform. This move has embarrassed both his opponents and allies.

It’s true that his nomination was based on the initiative of Geagea himself and not the result of a central decision. However, it is also true that it would be difficult for his allies, particularly the Future Movement, to ignore his run, especially as he most represents the March 14 base among all the candidates. So, March 14 decided to adopt Geagea’s nomination, not least for increasing the cohesion of the alliance and strengthening its negotiating position.

The March 8 coalition, which revolves around Hezbollah, isn’t at ease about Geagea’s proposal that Hezbollah’s weapons be placed under the umbrella of Lebanese legitimacy. March 8’s declared candidate is Gen. Michel Aoun. However, the latter insists on being a consensus candidate, not only because he knows that the Lebanese president is made ​​via an external consensus but also because his alliance doesn’t have the required 65 votes. For this reason, he recently showed openness to the Future Movement after a ferocious yearslong confrontation.

In reality, both March 8 and March 14 need the votes of Druze leader Jumblatt to win. Amid the current equilibrium, Jumblatt’s votes can determine the next president. The math has made Jumblatt the “president maker.” Does this mean he’s the ultimate decider? Of course not. In 2011, he was forced to bow to Hezbollah’s pressure and facilitate designating Najib Mikati to form a government, an act that effectively removed Saad Hariri, the head of the March 14 movement, from power and from Lebanon.

That scenario is unlikely to be repeated today, not only because the regional conditions wouldn't allow such an upheaval but also because Hezbollah wants its ally, Aoun, to stay on the party’s side. Aoun's reaching the presidency may force him to amend some of his positions of full support for the resistance and to stand at the same distance from all parties.

A centrist president would keep the ally Aoun where he is and maintain the internal power balance, which is the guarantee of the “resistance,” and open the door to a compromise with the other side, Saudi Arabia in particular. Then, the “password” would be sent to the leader of the Druze and to others — and the way for the next president would be paved.