Iraqi Prime Minister Nouri al-Maliki’s State of Law Coalition is blaming current problems on the "partnership" government, worked out in a power-sharing arrangement in 2010. 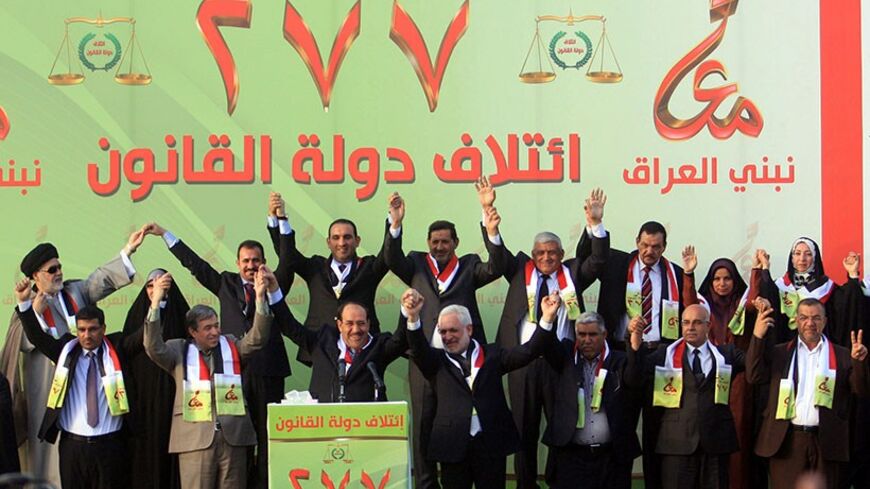 The State of Law Coalition, headed by Prime Minister Nouri al-Maliki, is mobilizing behind the goal of forming a "governing majority" as an alternative to the current "partnership" government, which is the clear product of a power-sharing arrangement.

Indeed, Maliki has begun describing his government, first formed in 2010, as a power-sharing government, blaming it for the political, security and economic failures afflicting Iraq.

Kamal Saadi, a leader in the State of Law Coalition, has stoked fears over the future with his remarks on April 21 that his party's failure to move toward a governing majority in the coming stage would spell political suicide.

This arrangement of voting requirements was imposed in past years as part of an effort to rally two-thirds of parliament's lawmakers to support a political bargain that encompassed the positions of president, prime minister and speaker of parliament simultaneously. In practical terms, this reform necessitated the cooperation of all political forces in the government.

In practice, Article 70 provided a legal outlet for the political bottleneck created by the requirements of electing a candidate to the presidency. That outlet can be found in Clause II of the same article, which states: "If none of the candidates receive the required majority vote, then the two candidates who received the highest number of votes shall compete and the one who receives the majority of votes in the second election shall be declared president.”

Thus, the only possible way to realize the State of Law's proposals for forming a majority government would be to jettison the two-thirds requirement.

But there are other factors that come to bear on the mechanisms of forming a new government. Most saliently, every Iraqi government must obtain at least 165 seats in parliament to win legitimacy.

The Iraqi electoral reality will simply not allow any political party to win that many seats, unless it forms a coalition with several other forces.

As for Maliki's State of Law bloc, according to most estimates, it will have difficulty winning more than 80 seats in the current election. Gaining an additional 85 seats will require forging alliances with several parties amid the complex map of Iraqi partisan politics.

The problem that confronts every Iraqi government can be formulated as follows: It must be representative of the country's three main constituencies (Shiite, Sunni and Kurdish) even as all three live in the shadow of bitter nationalist and sectarian divisions that have long since come to dominate the political landscape. As a consequence, forming a coalition of two of these constituencies (while consigning the third to the opposition) is impossible. Any attempt to do so would produce a government whose majority would be sectarian, not political. Moreover, it would threaten the country's unity and furnish new justifications for its partition.

According to a State of Law Coalition leader who spoke to Al-Monitor on condition of anonymity, the coalition is attempting to bring about a scenario where it can form an alliance that will include representatives from each of Iraq’s principal constituencies, regardless of the weight they carry. In addition to the State of Law Coalition, the potential alliance could include the Iraqiya Al-Arabiya bloc led by Saleh al-Mutlaq, which might win up to 30 seats; the Patriotic Union of Kurdistan led by President Jalal Talabani, which might win about 20 seats; and the Islamic Supreme Council of Iraq, a Shiite party that might win 30 seats. In addition, there are other smaller parties and independents, which might round the numbers up to 85 seats. Fully aware that Maliki's coalition aspires to win 100 seats, the source said Maliki is capable of meeting that target, after which he will only need to secure around 65 additional seats to guarantee the election of a parliamentary speaker and prime minister of his choosing.

The road map that Maliki's electoral coalition speaks of, and which requires its leader to win a third term as prime minister, would in turn guarantee the formation of an opposition along the following lines: It would include the Shiite Sadrist Movement, the Sunni Moutahidoun Coalition and the Kurdistan Democratic Party affiliated with President of the Kurdistan Region of Iraq Massoud Barzani, in addition to other parties that might include the Al-Wataniya list headed by Iyad Allawi and the Civil Democratic Alliance made up of the Communist Party and a number of independent forces.

This road map aspires to change the calculations of Iraq’s political alliances, and evolve beyond the realm of ethnic and sectarian alliances to the level of partisan interests.

But even though this scenario is possible on paper, the calculations involved (and the electoral outcomes required) to overcome the hurdles standing in its way will prove exceedingly complex.

In 2010, the Iraqi Supreme Court ruled that the "largest bloc" mentioned in Article 76 does not necessarily mean the party that wins the largest number of seats in the elections. Rather, it is the party that can be formed after the elections. This presented Maliki with the option of attracting outside support; by the same token, the same provision could banish the State of Law to the opposition, given the widespread political opposition to Maliki winning a third term in office.

The formation of a government through the previous mechanisms will mean that Iraq will be headed toward a period of governments constantly changing in accordance with the balance of political forces and alignments. We might even see more than one prime minister in the space of a single year, parliament's dissolution or even the holding of early elections.

More important than all this, the coalitions that will be talked about will be nothing more than another version of the political power sharing currently in effect. Such varied and fractious political forces and ideologies cannot be brought together without being made partners in government formation, as well as the division of ministries and offices. This phenomenon has been present in Iraqi governments since 2005.

For all that, one cannot take an exclusively negative outlook on the State of Law's orientation. It broke the barrier to cross-sectarian alliances, which might have heavy importance in managing a more vibrant political process in Iraq in the coming period. Yet, at the same time, it has not guaranteed the necessary political stability to confronting the security, economic and political challenges that have been menacing Iraq for years.