The Iraqi government is scrambling to address the terror threat to polling stations and voters with elections scheduled for April 30. 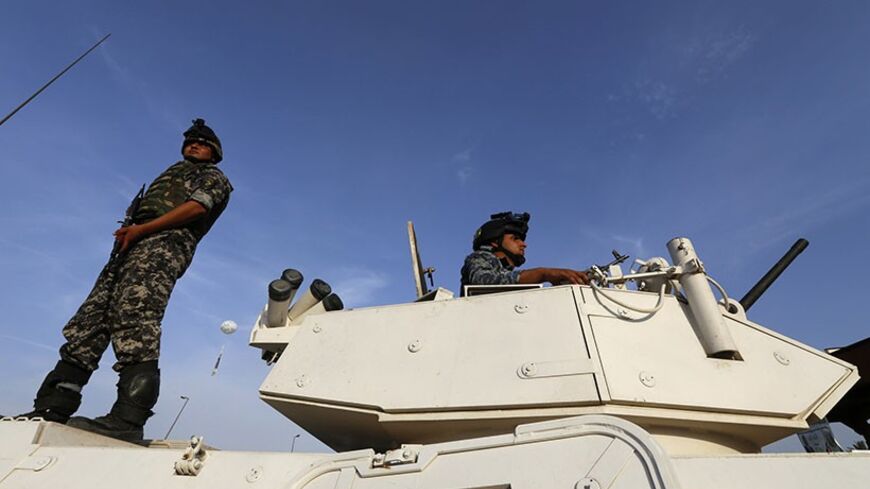 Security during elections is the main concern in Iraq. Even though officials affirmed the creation of new plans to secure the electoral process, it is still highly doubtful that polling stations in the insecure areas of Anbar, Baghdad and Diyala will be well protected.

Brig. Gen. Saad Maan, spokesman for the Interior Ministry and the Baghdad Operations Command, told Al-Monitor, “Military and security forces were handed over the school buildings affiliated with the Ministry of Education, which will serve as polling stations during the voting process taking place on April 30.”

“Security and military forces will be present in all schools during voting to protect the buildings and voters against any terrorist acts. … The security plan that is to be implemented during the elections relies on three security cordons, successively made up of military forces standing at intersections, security forces within the areas and the final cordon inside the [polling] stations,” Maan said.

He continued, “The cadres that will be tasked with searching voters and securing polling stations have been prepared, knowing that the Iraqi air force will be involved in the electoral security plan.”

Maan affirmed that the role of the forces participating in the security plan does not stop after the voting ends, as they are also responsible for securing the roads linking the polling stations and the vote-counting stations affiliated with the Independent High Electoral Commission.

As for the curfew imposed prior to the elections, he said, “We do not have confirmed information about this issue so far.”

The commission announced on April 17 that it set up a special voting plan for Anbar, ruling out the requirement of voting by electronic card, and opening the polling stations in areas hosting tens of thousands of displaced individuals from Fallujah.

Despite this, parliament Speaker Osama al-Nujaifi considered that elections in Anbar “will not be perfect due to continuous security incidents in the province, and to the displacement of a [number of] persons from Anbar to other areas.”

What is certain is that active militant forces in Iraq, mainly the Islamic State of Iraq and al-Sham (ISIS), have, for their part, prepared plans to undermine the electoral process, knowing that these plans will not be effective in the majority of Iraqi areas, except for Anbar, the outskirts of Baghdad and Mosul. Further security challenges in terms of managing the electoral process are expected to emerge in these areas.

Despite official reassurances, the spread of security unrest and the intercrossing of political agendas can hinder voters from casting their votes, whether due to threats and intimidation, or direct aggression against polling stations.

Those threats were reflected when, on April 26, during the last days of campaigning, a major attack was carried out targeting an electoral rally in Baghdad for Asaib Ahl al-Haq. The latter group controls militias that are a topic of controversy among the public. ISIS quickly claimed responsibility for the attack, which left dozens dead and wounded.

During the day designated for Iraqi security force members to vote, on April 28, about seven polling stations were attacked in at least six provinces — namely Baghdad, Kirkuk, Anbar, Salahuddin, Mosul and Diyala. Some of those attacks were carried out by suicide bombers, and the most deadly attack targeted a Kurdish rally in Diyala celebrating a video showing Iraqi President Jalal Talabani in good health.

The security of polls and the prevention of electoral fraud impose political challenges that are as serious.

A technical source in the electoral commission revealed to Al-Monitor that there is an unannounced feature of the devices used to scan voters’ e-cards, which is called “auto-destruct.” This feature causes the scanning device to stop working automatically at a specified time on the day of elections.

This measure, if applied, will mean that voting hours at polling stations cannot be extended, even if an emergency arose, preventing a station from serving its purposes in specified areas.

In general, polling stations are expected to be crowded in the early hours of the morning, contrary to past rounds during which voters tested security measures and avoided stations that were threatened with attacks. This is an indication that people in the majority of regions are generally reassured about security measures in the vicinity of polling stations. Yet, this is not the case in areas where security is brittle, and where the effectiveness of security measures has yet to be put to the test.