The Iraqi Independent High Electoral Commission is reporting a 59% voter turnout, despite the threats of violence. 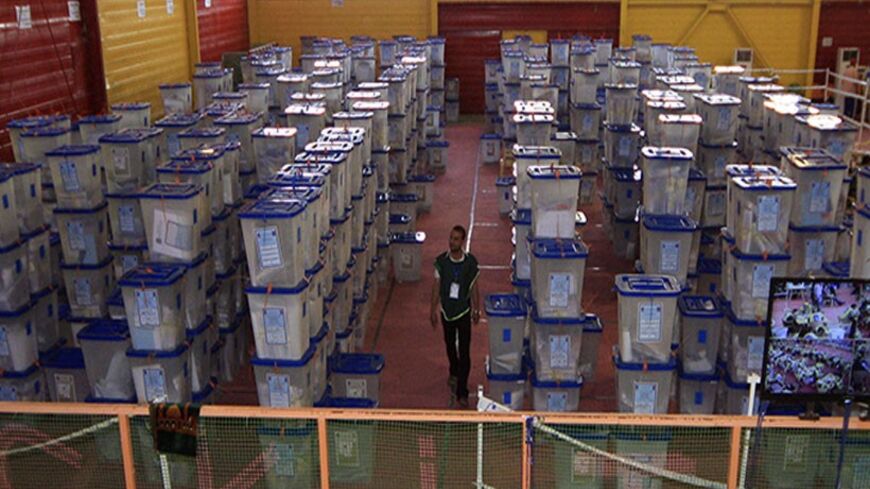 A worker from the Independent High Electoral Commission walks among ballot boxes in Karbala, May 2, 2014. - REUTERS/Mushtaq Muhammed

In a country where democracy has recently been introduced, such as Iraq, elections are much more than just a transition from one government to another. They represent the course of democratization and its manifestations in the country, based on the improvement or deterioration of the people and political entities' democratic conduct and practices. Based on the foregoing, the quantity and quality of participation and the preliminary declared results in this electoral round revealed a remarkable, positive development in the transition to a gradually stable democracy.

In these elections, just as in the previous ones, voices called for prohibiting the electoral process or not recognizing its results, but these voices did not find a significant echo and, on the contrary, calls for active participation to change the situation were made by almost all of the Iraqi components.

Sheikh Abdul-Malik al-Saadi, a senior Iraqi religious authority, issued a fatwa on April 28, deeming participation in the elections to be haram (religiously forbidden), for voters and candidates alike. He based his opinion on that previous elections did not produce any positive outcome for the Sunnis of Iraq. Saadi even accused those calling for participation in the elections of practicing political exploitation by using ignorance and deception. Groups from the Islamic State of Iraq and al-Sham (ISIS) distributed leaflets in Sunni areas a week before the elections, stating “The voter and the elected are unbelievers departing from the Islamic religion, and the barrels of our rifles will be aimed at their heads."

Yet, the majority of Sunni religious authorities agreed on the necessity to participate in the elections, stressing that the failure to participate would be unlawful, given the more significant harmful effects of this failure. These authorities included Sheikh Abdul Karim Zaidan, the former comptroller general of the Muslim Brotherhood in Iraq, Sheikh Ahmad al-Kabisi, a prominent senior cleric in Iraq, and others.

Moreover, statistics showed a high percentage of participation in Sunni regions, despite security difficulties and threats and even the impossibility of holding elections in several areas of Anbar province. The Independent High Electoral Commission (IHEC) announced that the general participation rate in Iraq reached 59% of the total number of voters, and more than 70% of those who were able to obtain electronic cards entitling voters to participate. In Anbar, in particular, this percentage reached 30%.

In terms of the nature of the voters’ trends, many preliminary reports on the vote-counting indicated a wide diversification. It became certain that there is no possibility for the emergence of a majority government for the State of Law Coalition, as was advocated by Prime Minister Nouri al-Maliki, whose term has expired. It has become almost certain that Maliki does not have any chances for a third term, and this in turn will help consecrate democracy in a country ruled by dictatorship and whose rulers remained in power for a long time.

The Iraqi voters showed a strong tendency to elect according to political programs and not just on ethnic and sectarian affiliations. Shiite and Sunni votes were distributed among multiple lists. This was in addition to the emergence of nonreligious lists that gained votes from all Iraqi communities. This reduces the level of sectarian alignment in favor of political affiliations common in stable democracies.

Iraqi voters also showed wide inclinations toward civil programs and away from nationalism and sectarianism slogans. Civil powers have emerged for the first time in the history of Iraqi elections in the form of a clear alliance dubbed the Civil Democratic Alliance. The alliance won between eight and 13 seats according to initial reports, a very significant number compared to its size and modest potentials. The major Islamic blocs such as the Islamic Supreme Council led by Ammar al-Hakim opted for civil slogans rather than religious slogans. They adopted citizen-based slogans and submitted civil projects. This was also the case, albeit with varied extents, for the other blocs that placed civil services and programs as electoral priorities.

Regarding the relationship between religion and politics, most of the religious authorities chose to stay neutral and not to directly interfere in favor of one party against the other, despite the violations by some clerics who are not that influential in the Iraqi street.

The percentage of the recorded irregularities and violations was not high enough in these elections to call for questioning the results. These elections were held under the supervision of several local and international organizations according to international standards, as confirmed by Nikolay Mladenov, the special representative of the secretary-general of the United Nations for Iraq. The latter said, “The parliamentary elections in Iraq were held in conformity with international standards and the Iraqis have proven that they are keen on their right to vote.” This is very important since these parliamentary elections are the first to be held since the withdrawal of US troops in 2011, and serious concerns were raised about their fairness and the possibilities of fraud or postponement.

Finally, all of the positive results and high hopes depend on the commission in counting votes and quickly announcing the results, since this will prevent questioning elections’ results and will prevent large blocs from influencing the results in different ways. Moreover, the scene of future alliances will show how likely Iraqi political parties are to invest the positive outcome of these elections or exploit them for partisan interests, and thus leading the country into further deterioration.