Promises of jobs and support to rebuild their homes sent many of Iraq's internally displaced in search of voting stations that would allow them to cast their vote on May 12. 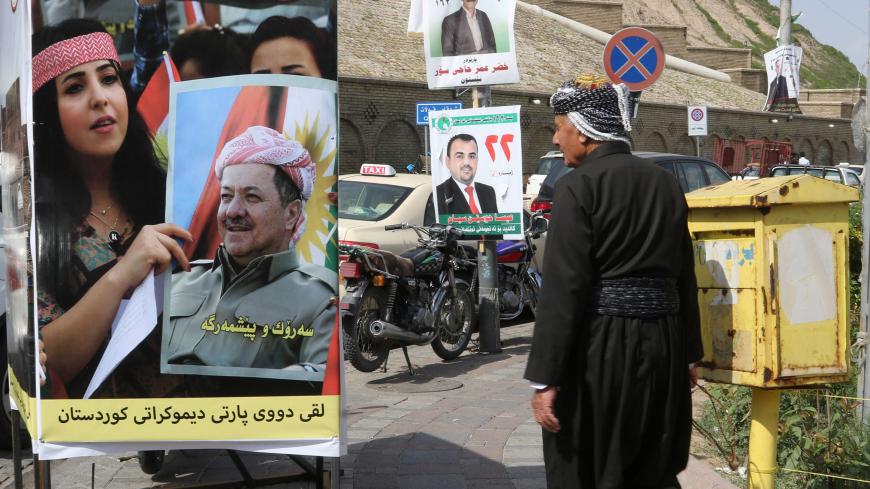 A man walks past campaign posters ahead of the parliamentary election in Erbil, Iraq, May 6, 2018. - REUTERS/Azad Lashkari

ERBIL, Iraqi Kurdistan — The Janabi cousins from Salahuddin province had already been waiting for five hours outside the polling station in Erbil, the capital of the Kurdistan Region of Iraq, where they have lived since the Islamic State (IS) took over their city in 2014. They watched the voting station open at 7 a.m. and were still there at midday because, lacking the most recent electronic voting cards, they were not allowed to vote.

According to the United Nations refugee agency, UNHCR, Iraq still has more than 2 million internally displaced persons (IDPs) who have been displaced since 2014, and their perceived inability to vote has led Sunni leaders to demand that the Iraqi parliamentary elections be postponed. Their request was refused and special polling stations were set up for those who fled the provinces of Ninevah, Kirkuk, Salahuddin and Anbar, both in the camps and in the cities where they have found refuge. Officials of the Independent High Electoral Commission announced that those who did not have the electronic voting card would be allowed to vote using their IDs and old voting cards, but many encountered problems on election day.

Yet while Iraq saw a historic low turnout of just over 44% and little enthusiasm for the May 12 vote, IDPs showed up in droves at the special voting stations, for instance in Erbil. The station where the Janabi cousins were refused was one of the few that ran out of ballot papers by the end of the day.

For the cousins, both in their 20s, being able to vote for their candidate was important, said Baha, leaning against a wall outside the crowded special voting station in the Mufti quarter in Erbil that welcomed IDPs like them but refused to accept their documents. “He has to give us a job,” Baha told Al-Monitor about the candidate for whom he was planning to give his vote. “He promised us, and he also promised to get us back into our homes.”

The cousins have not returned to Salahuddin yet because of the security situation; they fear the Shiite Popular Mobilization Units that currently police their area. “Our region has been liberated for two years now, but we are here and doing nothing,” Baha’s cousin Hamad complained. “We need change. That’s why we are voting for this new candidate,” he said.

Many of the men waiting at the polling station echoed the same resolve to vote for a new face instead of the political old guard that has been in power for the last 15 years. They quoted corruption, lack of jobs and security as their main failures, but they also mentioned promises of work and help rebuilding their houses as factors in their choices.

Sheik Taleb Ibrahim Isa of the Albu Hussein tribe showed a picture on his phone of the family home that IS destroyed in Ramadi. Things will only get better there “when the guys who say they speak for the Sunnis get out of Ramadi,” he told Al-Monitor, claiming he has documentary evidence of how corrupt these politicians are. “One of them even promised to pay the IDPs if they vote for him,” he said.

Some make it clear that their eagerness to vote is not connected to promises, but for fear of the comeback of former Prime Minister Nouri al-Maliki, who is largely blamed for letting IS take over Mosul. Women queuing at the gate of the polling station in the Mufti quarter indicated that many of them would therefore vote for the Nasr (Victory) Coalition of Prime Minister Haider al-Abadi, rewarding him for defeating IS and liberating their cities.

As most IDPs in Erbil are Sunni, this means they are crossing the religious divide that has held Iraq in its violent grasp for the past decade. Abadi has been successful in including Sunnis, Kurds and Yazidis in his mostly Shiite coalition.

Most of the female voters stressed that their choice is about their common interest in Iraq’s future, not religion. “He is better than the others as he created peace,” Amal Mohammed from Mosul told Al-Monitor. “We hope he [Abadi] will be the next prime minister. That has nothing to do with being Sunni or Shiite. We just need someone who serves the people and is capable.”

“He will fight corruption and poverty,” said Sabiha Naif of Abadi. “I want work. I want to be able to return to Sinjar, and I think he can make that happen. Most here are voting for him because they consider him cleaner than the others,” indicating that Abadi’s battle against corruption has not gone unnoticed, despite its lack of visible success.

There was still a steady trickle of voters entering the voting station at noon, but many were not allowed to cast their votes. Their perseverance was impressive, however, as most had already tried multiple stations. A family from Ramadi had been at the Mufti station since 8 a.m. and was getting desperate. They didn’t have the special voting cards and didn’t know where to go to cast their vote.

A young man from Baghdad who asked to remain anonymous complained that he had not been allowed to vote at all, even though he had the most recent voting card. He told Al-Monitor that he tried four different polling stations. Someone who overheard his complaint was quick to suggest that it was “because of the tensions between Baghdad and the Kurds,” referring to Baghdad’s harsh reaction to the Kurds voting overwhelmingly for independence in a referendum held last September.

A young Christian guard from Bartella tried to cast his vote at the polling station in Ashti camp in Ankawa, Erbil’s Christian enclave, but was refused because he does not live in the camp. He was sent to another polling station for IDPs a couple of streets away, but he couldn't find his name on the list of voters eligible to vote there. An older man complained to the head of the polling station that this was the sixth station he had visited, and he had still not been allowed to vote. He told Al-Monitor, “This is not right!”

Even though officials at the voting stations explained that the special stations were set up for those from Ninevah, Anbar, Kirkuk and Salahuddin, dozens of voters from those places were nonetheless turned away, mostly because they did not have the recently issued electronic voting card.

“We have no instructions to let people in without the electronic cards,” said the deputy head of the Mufti station, Muthana Mohammed, estimating that those without the required card accounted for around 15% of the IDPs. For IDPs from Baghdad and Diyala who wanted to vote, no arrangements had been made in Erbil at all, he said. He noted that they should vote in their own cities, even though they are far away, and traveling is impossible on election day.

Zukur Suleiman from Bartella had been denied to vote for the fourth time at the Mufti station and continued on her way to yet another polling station. “We have to vote for the future of our children,” she told Al-Monitor, explaining her perseverance. “Internally displaced people like us have to make our voices heard.”