Iraqi elections: all talk, no walk

Many political blocs have dismissed the Iraqi voter as unable to analyze complex and detailed political programs. 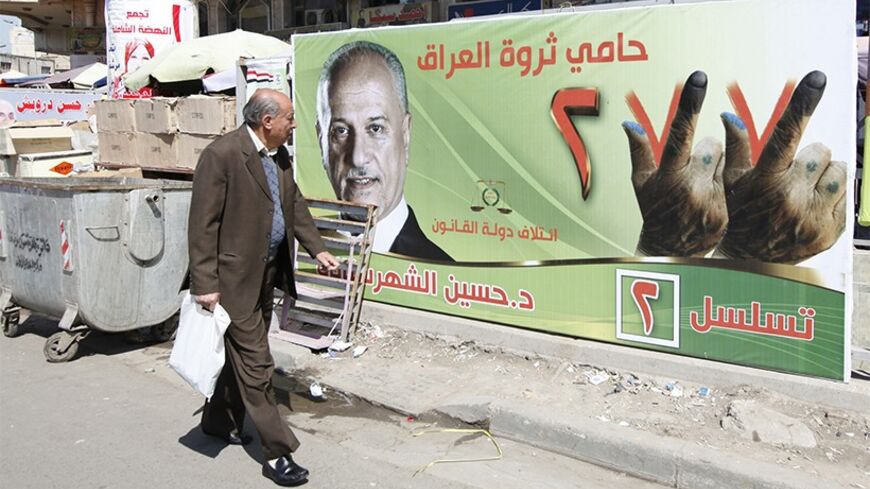 With the launch earlier this month of campaigns for the April 30 parliamentary elections, Iraq is back to debating the fact that none of the political blocs has put forward an electoral program or platform. The blocs, misunderstanding the concept of a political program, have instead reduced them to vague slogans.

The Iraqi political forces competing in the elections justify the absence of real programs by asserting that Iraq remains in transition, so there are real differences over the basis of the political process — such as the Constitution, government formation, the decision-making process and the relationship between the central government and the provinces and the regions. They claim that this reality forces them to take positions on these particular issues, rather than presenting political programs. For example, some campaigns are sloganeering on amending the Constitution, while others' slogans invoke government formation by the political majority, decentralization and the war on terror.

Being in a transitional phase and disagreeing over political fundamentals do not, however, justify lacking an economic or development program or taking positions on such issues as housing, health, education, human development, and human rights and freedoms. To be fair, a few political forces such as the Supreme Islamic Council have presented detailed programs, but the problem is then that the Iraqi voter is faced with a choice between a detailed program and lots of attractive slogans.

Some forces are totally ignoring this situation based on the belief that the level of democratic awareness of the Iraqi voter makes him or her unable to analyze complex and detailed programs. They assume that such issues as taxes, the free market, administrative reform, subsidized manufacturing, customs regulation, e-government, transparency in official transactions and others are not as important to citizens as those that affect their everyday lives, such as the security crisis and housing crises, low government salaries, retirement, electricity, drinking water and unemployment.

The Iraqi voter is not accustomed to analyzing economic and developmental programs, and during election campaigns, the cultural and political elites and the media focus voters’ attention on coverage of candidates’ mutual accusations and scandals rather than presenting analysis of political programs. Thus, for example, when a candidate states in his program, “I will solve the housing crisis in one year,” no one asks him how he would be able to provide such a large number of residential units in light of Iraq’s realizable potential and problems. The same goes for other slogans marketed as programs, such as “eliminating terrorism.” It is not enough for a candidate to announce his intention to eradicate terrorism. He must also present, at least to the political elite and specialists, a clear road map for doing so.

Iraq is in dire need of viable programs. Vague electoral promises over the past years have only weakened voter confidence in politicians and the democratic process, resulting in a large number of people not voting in the April 2013 provincial elections.

Many political blocs seeking votes are ignoring the reality that the Iraqi voter, after several elections, has become better at distinguishing viable promises from non-viable pledges. Many in Iraq agree that an essential part of the country's current crisis is due to not putting the right people in the right place, and this applies to electoral programs. For example, it is not the politicians’ duty to put forth an economic program. That responsibility belongs to economists and must be based on a true and detailed understanding of economic reality, making use of the experiences of other countries and peoples, not simply presenting economic wishes.

The next government must announce a program that presents the framework for its plans and commits to it before the people and parliament. The government program usually flows from the political program of the bloc that forms the government. That has not happened in Iraq because governments are formed by broad-based political blocs, making it almost impossible for them to produce a unified detailed program.