US can help heal GCC rifts

The United States is leading efforts to resolve the dispute between Saudi Arabia and Qatar, but uncertainty over the future of the Gulf Cooperation Council remains. 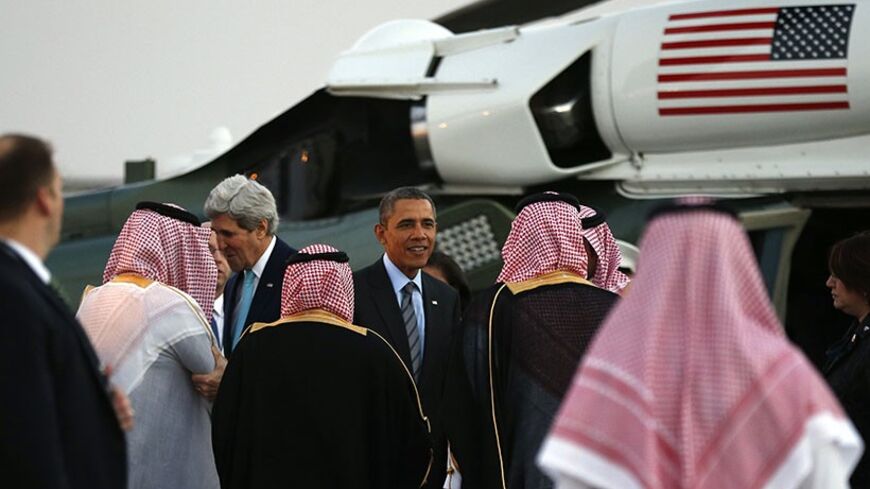 US Secretary of State John Kerry and President Barack Obama are greeted upon their arrival on Marine One for a meeting with Saudi King Abdullah at Rawdat al-Khraim (Desert Camp) near Riyadh, March 28, 2014. - REUTERS/Kevin Lamarque

The crisis between the GCC states has been temporarily calmed by a statement issued April 18 during the Riyadh summit. The countries involved made a pact that none would threaten the security of any other member state. In other words, things reverted to how they were prior to the withdrawal of the Saudi, Emirati and Bahraini ambassadors from Qatar and ended escalatory measures, though the states maintained their divergent political views about the region’s crises.

The GCC was established to safeguard the collective security of Arab Gulf countries. However, 30 years after its founding, the council remains unable to take major steps toward that end. In fact, the developments surrounding the latest Gulf crisis between Qatar and Saudi Arabia reveal that the biggest threats to the security of GCC countries may, in fact, come from fellow GCC states.

Furthermore, Gulf states do not really rely on the GCC for protection, particularly after it failed to unilaterally address Iraq’s invasion of Kuwait. It chose to rely instead on bilateral agreements with the United States and other world powers, as Omani Foreign Minister Yusuf bin Alawi bin Abdullah stated in December 2013 when he justified Oman’s unwillingness to join the Gulf union. He contended instead that Gulf security lay in the hands of international powers, in whose interest it was to prevent any country from dominating the Gulf, as when Iraq occupied Kuwait.

Among the major challenges faced by the GCC was the proclivity of Gulf states to sign bilateral economic or security agreements with world powers. This particularly irks Saudi Arabia, which considers such agreements violations of the collective security policy supposed to govern the GCC’s endeavors, as Saudi Foreign Minister Prince Saud Al-Faisal stated in the 2004 Gulf Dialogue meeting.

With the absence of Iraq — which might last for a while — from the Gulf’s balance of power, and in light of the American military presence that may continue until 2050 — as Vice Adm. John Miller, the US naval commander in Bahrain, stated — the Gulf region’s security becomes predicated on the interaction between three main forces: Iran, Saudi Arabia and the United States. Meanwhile, other Gulf countries may become arenas for competition, conflict and compromise. This in effect means that the stances adopted by Gulf countries — other than those by Saudi Arabia — would have no bearing on the balance of power in the region when compared with the effects of the interactions between these three states.

The weak influence of smaller Gulf countries in the balance of power in the region, itself governed by the relationship between the three major powers, has afforded smaller countries room to maneuver within the spheres of influence of the major players. It has also allowed them to gain additional independence in the formulation of their internal and foreign policies. Thus, the GCC ceased to be tasked with safeguarding the collective security of its members as a result of the differences in their various foreign policies. These differences particularly concern Iran, the fear of whose domination was the main motive for the establishment of the GCC in the first place, more than three decades ago.

With the exception of Bahrain, which is driven to subservience to Saudi Arabia by the internal threats to its regime, the remaining smaller Gulf countries consider their relationships with Iran a balancing factor against Saudi hegemony.

Oman’s rejection of the Gulf union idea and the United Arab Emirates' withdrawal from the Gulf monetary union initiative in 2009 are indicative of both those countries’ rejection of what they consider Saudi hegemony. Since the foreign and security policies of those countries reflect the interests of their ruling elites, who consider anything that detracts from their absolute rule a security threat, the possibility of the GCC evolving to become anything more than a coordinating council remains remote.

In an attempt to overcome the dilemma of Saudi hegemony, Ahmed Ali M. al-Mukhaini, the former assistant secretary-general of the Omani Shura Council, proposed in an Al-Monitor article the idea of establishing a new Gulf security body, with Iran as a member. He considered Iran’s participation a positive factor for the success of such a body, with the balance of power between Iran and Saudi Arabia serving to allay the fears of other member states about either of the two dominating them.

An effective US participation in the GCC might be another solution to this dilemma, in light of the bilateral defense agreements that the United States has with each country separately. This solution was put forth in US Defense Secretary Chuck Hagel’s initiative during the Manama Dialogue last December. The most important details in Hagel’s initiative were the transformation of the GCC into an independent body to which Washington could sell weapons, as it does to NATO; the call to establish a joint Gulf defense system to counter the threat of ballistic missiles; and, the formation of a joint council composed of Gulf defense ministers and the US secretary of defense which would convene every six months to discuss their common defense policy.

The Qatari dispute with Saudi Arabia, the UAE and Bahrain was the first challenge to this US initiative. It is impossible to form a joint military command and provide it with American weapons and training when a crisis threatens to break apart the GCC. This is why Washington sought to solve the dispute and prevent escalatory moves, with US Secretary of State John Kerry meeting the Qatari emir in Algeria on April 3. On April 6, Vice Adm. Miller announced that the Gulf disagreement would end. He also said the US role in the Gulf would be to provide the help needed to avert the escalation of such disputes between partners. The weekly US Defense News reported that the admiral was leading efforts to resolve the Gulf dispute from his headquarters in Bahrain.

If adopted, such an initiative would serve the Saudi ambition of establishing a cohesive military alliance to confront the common threats and dangers faced by GCC countries. In addition, Washington’s effective participation would reassure other Gulf countries fearful of Saudi hegemony over them.