Israel continues to vocally reject a Palestinian reconciliation deal that might bring Hamas into the moderate fold. 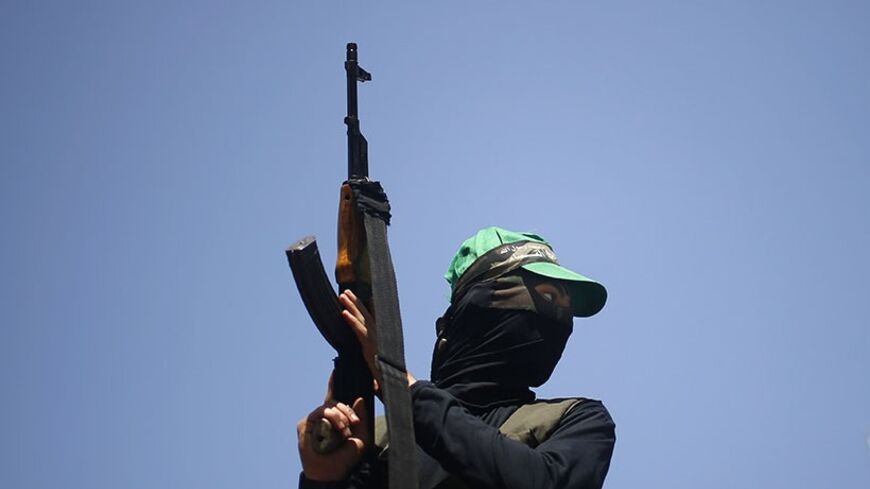 Ever since the 2007 split that divided Palestinian rule between the West Bank and Gaza Strip, the Ramallah-based leadership has had three options to consider: using force, compromising or waiting for Hamas to capitulate. Israel, which was established and continues to exist through use of brutal force, has always recommended that Ramallah crush the Gaza-based Islamic insurgency. Israelis used their own history as an example. In the early days of the State of Israel, David Ben-Gurion’s army sank the Altalena, a ship loaded with arms belonging to the rival Irgun, headed by Menachem Begin, killing 20 Irgunists.

Palestinian President Mahmoud Abbas could have also yielded politically to the many demands of Hamas, the most important of which was to abandon the Western-sponsored negotiations with Israel and join Hamas in its "resistance" program. Instead, Abbas choose a third option: supporting Gazans while waiting for Hamas to give in. The Ramallah-based government has been paying salaries and covering the electricity costs for the Gaza Strip since the split erupted in 2007, even at the cost of its own fiscal health.

Abbas’ strategy finally paid off, in an agreement that at least on paper suggests a total Hamas capitulation and a clear political victory for Abbas and the Palestine Liberation Organization (PLO). The Islamic movement suddenly began speaking of Abbas as president and even applauded one of his speeches that reiterated his commitment to the peace talks. Hamas has agreed to yield its government to a unity cabinet made up of technocrats, none of whom will be known Hamas members. The Islamic movement has also crucially agreed to presidential and parliamentary elections to be conducted no later than six months after the formation of the unity government. The most important political concession, however, is that Hamas agreed to join the PLO and all its institutions.

Throughout the talks with Israel, there had been arguments concerning whether Hamas would be obliged to separately accept the three conditions set out by the now nearly defunct Quartet: recognizing Israel, renouncing terror and accepting all previous agreements signed by the PLO. The position presented by the PLO was that all of these conditions have already been met by the PLO, and therefore Hamas, by joining the organization — as long as the PLO does not retract its earlier positions — would be in adherence with the three conditions.

For the PLO, Hamas' capitulation was made abundantly clear when the PLO’s Central Council met in Ramallah on April 26. Addressing the second highest PLO committee, Abbas reiterated that the unity government, as stipulated in the signed April 23 reconciliation, will continue to recognize Israel, renounce terror and adhere to all previously signed agreements. Most important, Abbas said publicly that he wanted to continue the negotiations with Israel irrespective of the reconciliation, a sure sign that Hamas had capitulated politically to the PLO.

The European Union, which had previously been trapped by refusing to deal with a duly elected Palestinian government, was quick to welcome the reconciliation as were two other members of the Quartet, Russia and the United Nations. The United States was mild in its reaction to the reconciliation, stressing that the key is for the new government to adhere to the Quartet's conditions.

The only party opposed to Hamas' capitulation has been Israel, which has declared a public relations war against Abbas and the PLO. The disingenuous position of Prime Minister Benjamin Netanyahu's government has been exposed by a number of Israelis arguing that it was the Israelis, especially Foreign Minister Avigdor Liberman, who have regularly complained that Abbas was not a peace partner, because he was unable to speak on behalf of the Gaza Strip or implement any agreement including it. By suspending the peace talks, already on their last breath due to Israel’s reneging on the prisoner release agreement, the Israelis have clearly shown that they are not interested in a genuine peace that includes all Palestinians.

The tough and strange Israeli reaction to Hamas' capitulation to the PLO is indicative of a party that is not genuinely interested in peace. It seems to reinforce the Palestinian claim that Netanyahu prefers the situation in which Gaza is not ruled from Ramallah and Hamas remains outside the PLO, pursuing its "resistance" agenda against Israel.