Sinai's tribal leaders are losing influence among their tribes, who largely consider them informants for the sitting government in Egypt. 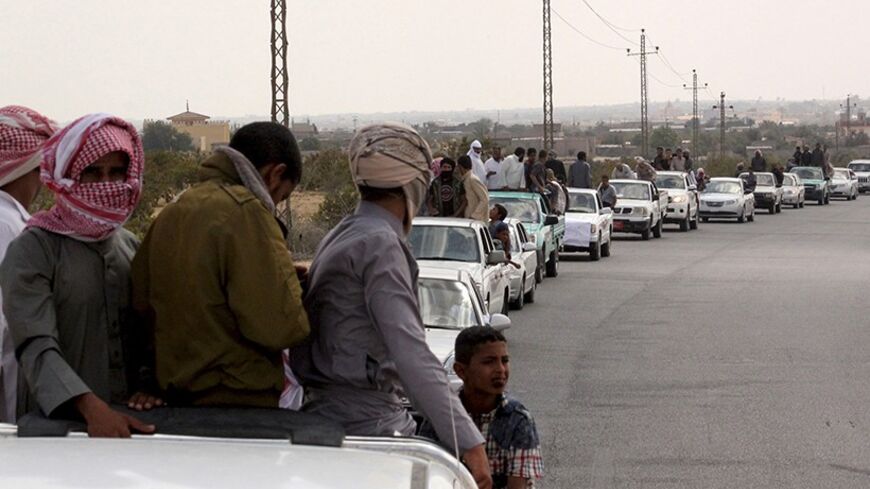 A funeral convoy carrying the bodies of four Islamist militants drives through Sheikh Zuweid, in the north of the Sinai Peninsula, Aug. 10, 2013. - REUTERS

SHEIKH ZUWEID, Egypt — The Sinai Peninsula has lately seen a significant decline in the role and influence of tribal elders. They once enjoyed respect and appreciation, and their words for the tribe were final. Now, however, they are accused of being "informants" for successive governments in Cairo.

Most recently, tribal elders have been the target of a massive campaign criticizing them for quickly switching political affiliations and supporting whoever is currently at the Egyptian helm.

Al-Monitor spoke to Mohammed al-Sawarika of the Sawarika tribe, the largest in Sinai, to learn his take on this issue. He said, “Tribal elders were the first to support former President Hosni Mubarak, so much so that they pre-filled ballots for him and forced tribal members to elect him. They also stood with him against the January 25 Revolution. After the revolution succeeded, they threw their support behind the revolution on behalf of the tribes. And following the arrival to power of former President Mohammed Morsi, who belongs to the Muslim Brotherhood, they declared their support for him and bestowed on him Sinai the [tribal] gown to symbolize their allegiance to him. The same thing happened a week ago with Field Marshal Abdel Fattah al-Sisi, the candidate for the presidential elections.”

Sawarika condemned the mercurial political attitudes of tribal elders and their ongoing support to whoever is ruling, saying, “Our elders are hypocrites and their actions are nauseating.”

For his part, Salama Armelat from al-Armelat, a major Sinai tribe, told Al-Monitor, “Most elders who appear in pictures with the presidents have no political ambitions except to influence government agencies to achieve their personal interests, instead of tribal interests. … The tribal elders represent only themselves, and currently have absolutely no presence on the ground. They are just pawns in the hands of the ruler.”

In an interview with Al-Monitor, a Sinai tribal elder who declined to be named for security reasons revealed the pressures faced by tribal elders. He said, “Our visits to heads of state and officials are organized in a compulsory manner by military intelligence in the town of al-Arish, the capital of North Sinai. … If any elder refuses to join such visits to avoid involving the tribe in political battles, then this elder is targeted and attacked.” He cited an incident with an elder on April 8, when the elder refused to travel to meet Sisi in a meeting prepared by military intelligence in Cairo and declare the tribe's support for Sisi’s candidacy.

“He refused to meet Sisi for fear of being targeted by armed terrorist groups that target whoever declares his support for Sisi in Sinai. Many tribal elders were recently assassinated. But a military intelligence officer vowed that the elder would face more pressure and punishment [from his organization for refusing], telling him, 'I will make of you a lesson to your family and the tribal elders,'” he said.

He provided another reason for decline in the tribal elders’ role, explaining, “We cannot express the viewpoint of the tribe amid harsh security intervention to control the elders and use them in the media to manipulate public opinion for political purposes.”

Bassem al-Armili, a Bedouin poet, told Al-Monitor, “The decline in the role of the elders was caused by them getting money from the state, becoming 'employees' serving the government that is paying them, rather than serving the tribe, as is customary in ancient Bedouin customs and traditions.”

Armili wrote a poem, which he read to Al-Monitor, about tribal elders that can be paraphrased as: "Among the Bedouins is a man who is both an elder and a vile man. He obeys the pharaoh in everything, and he changes colors like a chameleon."

For his part, Sinai activist Saeed Aatiq told Al-Monitor, “In the past, the elder’s role filled the gap between the tribe and the state. But then state security services started interfering, specifically in 2007, by selecting elders to continue the policy of marginalization imposed by state institutions on Sinai and its people and to ensure the elders’ loyalty [to the state] instead of to his tribe.”

Aatiq talked about how the Egyptian youth are losing confidence in their tribal elders, considering them “guides for the security services." He said, "Tribal elders have kept silent toward unjust and fabricated accusations against Sinai youth, which have amounted to 7,000 sentences in absentia for false political and security charges.”

Aatiq warned the state about continuing that policy with elders who cannot influence the tribes’ members. “This will push Sinai into the unknown, because the state is not caring for the people on the ground who are drowning daily in very complicated situations as a result of being left alone to fight poverty and extremism.”

On how the government chooses an elder, Aatiq noted, “The state has no real selection mechanisms, but the standard is about how much security help the appointee to that position can provide. This has led to matters deteriorating, and the best proof is the failure of these elders in front of the unprecedented spread of extremism in Sinai. [That happened] because radical Islamist groups took advantage of this weakness and created for themselves a sphere of influence in the minds of young people.”

On the other hand, al-Munai, a man from the border region south of Rafah who did not wish to reveal his first name, told Al-Monitor, “Electing the elder is the best way to make him speak in the name of the tribe in front of government and security agencies, because his role needs to be stronger to deal with the crises afflicting the people of the area. … Now, after the revolution, tribal members cannot be forced to adopt a unified political position amid differing partisan, political and social opinions.”

The crises continue, and so does the absence of a link between common tribal members in Sinai and the Egyptian state. This situation will continue until there are true representatives who pass on the voice of the people and their demands to the powers in Cairo.