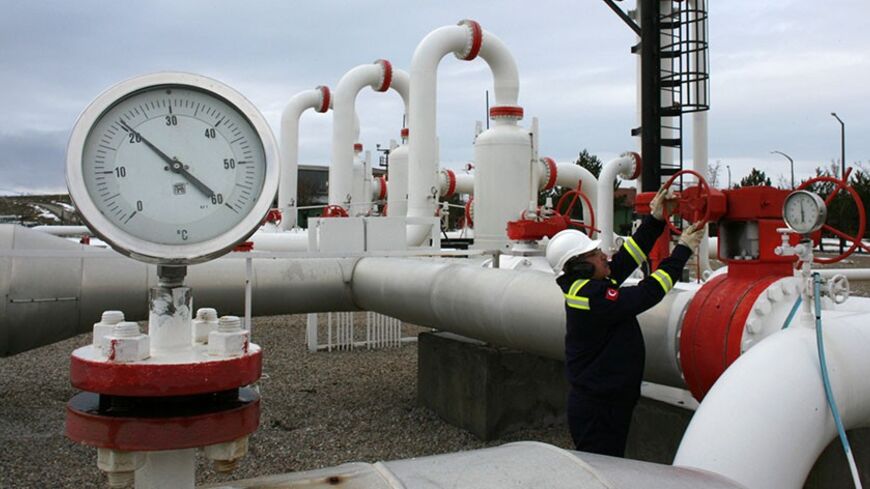 A worker checks the valve gears in a natural-gas control center of Turkey's Petroleum and Pipeline Corporation, near Ankara, Jan. 5, 2009. - REUTERS/Umit Bektas

On the morning of March 3, fallout from the Crimea crisis hit the European energy market. Over fears of a gas supply disruption similar to the 2006 and 2009 Russia-Ukraine gas crises, the benchmark oil price rose by 2%, gas futures climbed by 10% and Russian gas giant Gazprom's shares fell by 13%. However, not all consumers of Russian gas share the same level of risk. While EU members have developed some measures to reduce their energy security vulnerability, Turkey’s vulnerabilities have not changed since the 2009 crisis.

Russia’s gas-export monopoly, OAO Gazprom, announced March 1 that it may end the December 2013 agreement between Russian President Vladimir Putin and Ukraine’s overthrown President Viktor Yanukovich to supply Ukraine gas at a cheaper rate. This sounded new alarms in the European energy market over the gas-disruption risk via pipelines crossing Ukraine, as happened in 2006 and 2009. Despite the panic, EU member countries are much less vulnerable to anything similar to what happened in 2009. The financial crisis has reduced energy consumption rates in Europe, while supply measures (such as an increase in storage capacity, the diversification of supply routes and the expansion of gasification terminals) have made EU-member countries less vulnerable. Conversely, Turkey, with an annual energy-demand growth rate of around 4.5% and no new energy security measures, remains calm even on the eve of a major Eurasian gas crisis.

One quarter of all energy consumed in the EU is gas, and 58% of this gas is imported. Of this, 42% comes from Russia, and around 80% of EU gas imports from Russia pass through Ukraine. Among the eight new Eastern European member states, dependence on Russian imports averages 77%. Turkey uses natural gas to produce 32% of its electricity, and the country imports some 46.6 billion cubic meters (bcm) of gas from four gas pipelines. Two of these pipelines — West Gas (with a 16 bcm capacity) and Blue Stream (14 bcm) — transfer the Russian gas that constitutes the largest share of Turkey's gas supply at 58%.

In 2006 and 2009, Russia used its gas monopoly as a political weapon in its dispute with Ukraine, cutting gas flows to the European Union via Ukraine. The Western Balkan gas routes were completely disrupted. Romania, Bulgaria, Greece, Macedonia and Turkey’s gas supplies were all severely damaged. Very low levels of gas flow were reported from Poland and the eastern Romanian entry points. Eastern Hungary received only 20% of its normal gas supply, which also affected supplies to Serbia and Bosnia-Herzegovina. And on Jan. 7-20, no gas came to Europe and Turkey from Russia.

After this crisis, the EU recognized its energy security vulnerability and launched several projects to minimize it by diversifying natural gas import routes and increasing the share of LNG in the total gas supply. Conversely, Turkey did neither of these things, and handles today’s events with the same infrastructure it had for the 2009 energy crisis.

Multiplying gas supply routes was the most important measure taken by Germany, accomplished when it invested in the Nord Stream gas pipelines. The Nord Steam pipeline supplies Russian gas to Germany via Belarus and the Baltic Sea, cutting the proportion of Gazprom's Europe-bound exports that transit via Ukraine by around 50%. Turkey, having a comparable level of gas dependence on Ukraine-controlled routes, in the last eight years has only managed to sign a few agreements with Iran and Azerbaijan and did not add any new supply routes. This makes it still dependent on Western gas pipelines passing through Ukraine.

In terms of gas-storage capacity and stocks, Gas Infrastructure Europe, which represents the gas-infrastructure industry, estimated that in late February 2014, European gas storage was 10 percentage points higher than this time last year, and about half full. As with road diversification, Turkey is not in a better position than it was in 2009. The country still has limited storage capacities, around 3 bcm in total (about 5% of the demand), with a sending-out capacity of some 58.5 million cubic meters (mcm) per day. There are two storage facilities under construction — one in Silivri and the other in the Tuz Golu region, but neither would be sufficient to help Turkey overcome a potential gas supply risk.

The same issue exists for LNG regasification terminals. Turkey still has two such terminals with a total maximum annual capacity of 14 bcm. BOTAS owns the Marmara Ereglisi LNG Terminal, which has a maximum send-out capacity of some 22 mcm per day. Ege Gaz operates the Aliaga Terminal, with a capacity of 16.4 mcm per day. In 2011, around 6.5 bcm of natural gas was imported in the form of LNG. These LNG regasification terminals are not sufficient to meet increasing gas demand.

In this frame, it is also hard for Turkey to count on buying future supplies of US shale gas in the event of a disruption in Western gas pipelines. While Europe has been increasingly installing specialist terminals that will allow gas to be imported from countries such as Qatar and the United States in the form of LNG, Turkey has not.

Moreover, European stakeholders have one more reason to be less afraid of a gas crisis, as consumption rates are now stagnant. Indeed, European gas demand in 2013 was at its lowest level since 1999. Meanwhile, in Turkey the energy demand growth rate is still above 4% per year.

All in all, Turkey’s gas supply security is still as vulnerable as it was during the first Russia-Ukraine gas crisis. In the last eight years, Ankara’s energy-security vulnerability has helped enhance the country’s ties with Russia, while some European countries have become less entwined with Russia in the course of effective measures taken after the last two gas crises. Therefore, in the case of an energy crisis, Turkey will be unable to disassociate itself from Russia due to its continued reliance on Ukraine-transiting gas.