The Egyptian defense minister steps down to run for president. 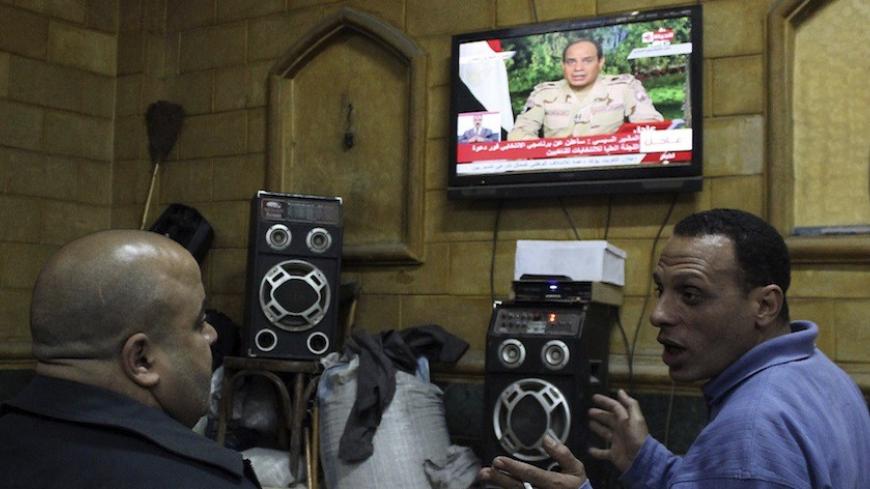 Commenting on the never-ending rumors about Field Marshal Abdel Fattah al-Sisi's impending resignation, someone on Twitter quipped on March 26: “Al-Sisi resigns more times than Mubarak dies.” Hours later, finally ending the prolonged speculation and continuous and suspicious delays, an avalanche of people proclaiming to speak on his behalf and a lot of “What if he actually doesn’t do it?” Egypt’s now former defense chief Sisi formally announced his candidacy for the presidency of Egypt.

Following a meeting with the Supreme Council of the Armed Forces (SCAF), Sisi submitted his resignation to interim President Adly Mansour who notably attended the SCAF meeting. Sisi then proceeded to give his pre-recorded speech on Egypt’s official state media, in a move that some criticized as an abuse of power, position and state resources in a manner that other candidates —well, there’s effectively only one other candidate — cannot hope to emulate, while others defended him in saying that he was a top state official resigning at a critical time.

Either way, Sisi proceeded to speak in what was a very modest visual setting — perhaps a bit too modest. He wore a bare military uniform with his name on it, stripped of all insignia and decorations and even without a beret. A very simple photo of a green natural scene and a flag served as a backdrop as he sat at a desk and delivered his speech. Throughout the speech, he switched between classical and colloquial Egyptian Arabic, a move traditionally used to break any coldness or distance caused from the usage of classical Arabic, meant to engage audiences on a more personal and impassioned level from time to time.

Sisi maintained a tone that attempted to combine resolve and fatherly concern for the nation: looking forward to serve, but familiar and concerned with the challenges ahead. His tone was simple and modest, yet with strength projected predominantly through the uniform and words being said. It appeared to have worked to some extent.

Aside from the usual committed critics, reactions on social media seemed overall positive. While watching the speech with family and acquaintances, an elderly woman stood up, pulled out her cellphone and took a photo of the televised speech with a jubilant air. After the speech, those watching — all of whom from the start have had anti-Islamist sympathies — showered the new candidate and his speech with praise.

The content of the speech itself largely covered most of the expected items and soundbites, quoted from the official transcript. Sisi has spent his “entire life” as a soldier in “service of the nation,” in uniform for nearly “45 years” “to protect the nation,” but now he will “take off this uniform to protect this nation.” He spoke of “the will of the people” as supreme, and that “no one could become president” of this nation without such will, and that “in all humility” he submits his candidacy hoping that the people’s support will give him “this great honor.” He added that his candidacy itself was in response to “the call of wide audiences of the Egyptian people,” and that he will continue to be a “soldier” in any position “demanded [of him] by the masses of the people.”

The former defense chief then moved to speak about the challenges facing Egypt, stating that he needed to be “honest” with the people as he had “always” been and also honest with himself. He spoke of challenges and “economic, social, political and security realities facing Egypt” from “before the January [25] Revolution” and now even more after the “June 30 Revolution.” He spoke of “millions” of Egyptians and youth who cannot find employment or have access to [medical] treatment, and how Egypt — a nation “wealthy with its resources and people” — is dependent on aid, describing all of these phenomena as “unacceptable.” He then moved on to state that tasks ahead included “rebuilding” the state bureaucracy, returning the “wheel of production” to turning “in all sectors to save the nation from real dangers it is facing,” as well as restoring the respect of the state.

Sisi then made a shift in this predominantly internally focusing speech, touching on foreign and security policy in stating that Egypt will not become a “playground for a local, regional and international” player to mess with it, a jab seen as primarily targeted at Qatar and the United States, and he spoke of how Egypt was a nation that has its “respect.”

Moving back to local affairs, he reiterated his commitment to the current road map (in itself an amended version of the original road map), said that his candidacy should not “block the right and duty” of others to run for president if they saw themselves “capable” and that the people would choose who they preferred, and he would happily accept their choice. He called on “partners in the nation” to realize that everyone is in a “single boat” hoping to “dock on the shores of survival” and that this was not the time for personal and temporal interests. He then stated that he wanted “Egypt for all its children, without exclusion or exception or discrimination,” and that anyone not convicted by law shall be “an active partner in the future without limit or ties.” While some have tried to read a reconciliation initiative into this statement, it has largely been within the same rhetorical line of the government.

He then moved on to praising the people and their will, and said that it was that will of the people and “not the politicians or the military who removed the two previous regimes, but you, the people.” This renewed jab at the Mubarak regime notably comes at a time when some are concerned that Sisi could end up becoming a gateway to its restoration. He also stated that the people will have a crucial role and responsibility to play in getting the country through recovery, and that victory was achievable because the people have “achieved them before.” He described what is necessary of the people as “serious, dedicated” and “hard” work of “all able male or female Egyptians” and that he would be the first to offer “effort and sweat.”

Interestingly, Sisi then stated that he “will not run a campaign in the traditional form,” though he quickly added that he will still offer his vision and electoral program. But he continued that he will do this without extravagance in “rhetoric, spending or known practices” as that is “not suitable for the conditions now.” That line probably struck a few positive chords. What it actually means though is still yet to be seen, but it is likely a hint of the realization that a traditional campaign would be complicated in terms of security as well as the pragmatic realization that when a candidate is riding high what is needed is to primarily sail through the finish line.

Toward the final part of his speech, Sisi reminded Egyptians that they are “threatened by the terrorists” from “entities that seek to destroy our lives and peace and security,” and added that “even though this was [his] last day in uniform” he will continue to “fight everyday” to not only rid Egypt of “fear and terror” but quite notably the “entire region.” He repeated a sentence he once said in an earlier speech in reference to the military: “It’s better we die, but Egyptians aren’t made afraid.” He then smartly moved to shift the mood and speak of “hope” after the gloomy previous segment, and that Egypt will “return to the forefront of nations” to “teach the world as it once did.” He then also smartly ended by saying that he does “not offer miracles, but rather hard work, effort and self-denial,” and promised that “the people and the leadership” can bring “stability, security and hope, God willing,” before ending with “May God protect Egypt, and protect its great nation.”

All in all, the speech was significantly well-written, though the expectations resulting in the hype from all the delays and speculation were very difficult to live up to. Ostensibly, his supporters were seemingly pleased, his detractors apparently have not yet crystalized anything glaring in the content to focus on as attack points. Beyond centering on making it short and concise and focused in purpose while also quickly going through basic rhetorical and political lines, Sisi’s best achievement from the speech was getting away with telling people not to expect “miracles” from him without necessarily making this weaken his image.

But the biggest challenge for the field marshall starts now. With the exception of leaks which mostly flattered his image, probably to the opposite intention of the leakers, he has been a man of relatively limited words, and most of his speeches have been planned, controlled and limited. Very little is known about where he stands on a wide range of issues. A presidential campaign, even if Sisi somehow did promise a stripped down one, will mean many more appearances, actions and speeches, many more questions to answer, positions to take and room for divisiveness. With substantial momentum behind him right now and only one significant opponent (Hamdeen Sabahi) who has but a slim chance of an upset victory, the challenge with every written and spoken word and action will be how to keep such momentum, and appeal to what are at many times unrealistic expectations, hype and halo.