Russia has Mideast options in response to Ukraine

As the United States weighs its options in response to Russia’s moves in Crimea, Russia holds its own cards, especially with Syria and Iran. 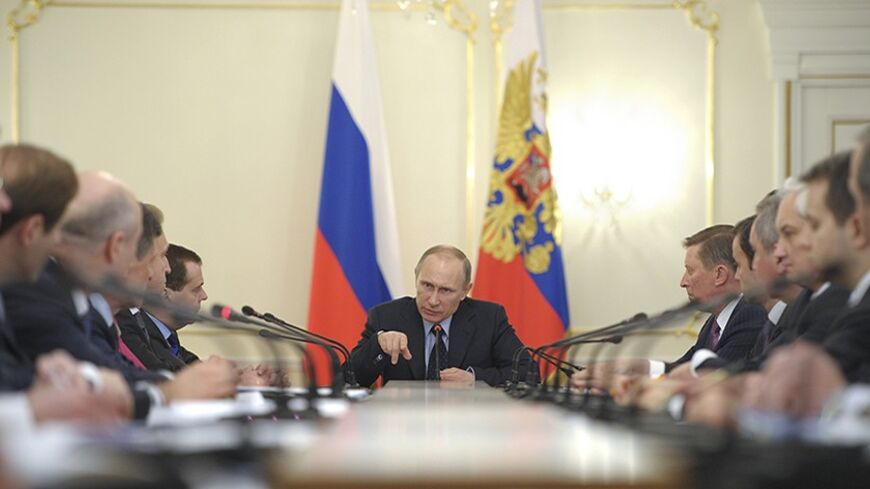 Will Russia’s occupation of Crimea produce a fundamental break between Moscow and Western capitals? This is the central strategic question emerging as Russia’s troops consolidate their positions and Western leaders scramble to develop their responses. The answer is not yet apparent, though it could have important implications for US policy in Europe and around the world — particularly in the Middle East.

After a flurry of empty bombast — notwithstanding their rhetoric, neither the United States nor any major European nation has yet imposed the “costs” or “consequences” they have announced — most Western governments now appear to be looking for a negotiated solution, while reserving the prospect of economic sanctions for the future. The United States is leaning further forward, but Germany’s Chancellor Angela Merkel appears uninterested in taking this approach toward a top trading partner. French Foreign Minister Laurent Fabius has stated explicitly that his government has not yet reached the point of reconsidering the sale of two Mistral helicopter carriers to Russia’s navy.

On the Russian side, President Vladimir Putin has said that he does not see Crimea becoming part of Russia, though he insists that Crimea’s residents have a right of self-determination like that “granted to the Albanians in Kosovo” and that Moscow will not “provoke any such decision.” He said that he told ousted Ukrainian President Viktor Yanukovych that he “has no political future” but argued that while the Supreme Rada (Ukraine’s parliament) and the government ministers it has appointed are “partially legitimate,” acting Ukrainian President Oleksandr Turchynov is not legitimate due to procedural violations in Yanukovych’s removal. Still, Putin said, the speaker of Russia’s State Duma has been in contact with Turchynov in his capacity as speaker of the Rada.

In this environment, it is possible for Western governments and Russia to edge toward negotiations and an eventual settlement. Moscow’s public position does not require Yanukovych to return to office or Crimea to become an independent country — outcomes that neither Washington, European capitals, nor Kiev could readily accept. While talks like these have a tendency to proceed slowly, the United States and Europe may seek to accelerate the process to head off a referendum that Crimea’s new government has set for March 30 or to ensure the presence of international monitors from the Organization for Security and Cooperation in Europe (OSCE) or some other entity. However, if there is no deal and the vote takes place, negotiations could become much more difficult.

If talks begin and appear to be productive, these processes may well consume much of the limited bandwidth that senior US, European and Russian officials have at their disposal in managing international affairs. At the same time, all sides might be reluctant to disrupt negotiations over Ukraine by changing the status quo in other areas, such as in dealing with Syria and Iran. This could produce a hiatus of sorts in US-Russian diplomatic engagement and broader US and Russian policy on those two issues — unless those in the region force continued attention by seeking to exploit this environment or otherwise creating their own simultaneous crisis. If a deal on Ukraine emerges, it would allow all to reopen for business in the Middle East.

However, there is of course no guarantee that Washington, Moscow and others will be able to find a mutually acceptable scope and format for talks. The United States and Europe have long appropriately rejected the idea that Russia has a role in its neighbors’ key choices and will probably be quite reluctant to create the impression that they are permitting Moscow to have a voice like this in Ukraine’s decisions. At the same time, Ukraine’s choices have consequences for Russia and its interests — and the Kremlin clearly feels that the West has not acknowledged its perspective. Even if talks begin, issues like these will create repeated roadblocks and could derail the process.

Moreover, there is no guarantee that Ukrainians (whether they identify themselves as Ukrainian, Russian, Russian-speaking Ukrainian, Crimean Tatar or something else) will sit idly while their leaders and others engage in this process. The forces in motion within Ukraine are not subject to direct control by any individual or group of individuals and could rapidly provoke actions and reactions that lead to large-scale violence and even a bloody Russian intervention in eastern Ukraine.

The failure of negotiations or violent civil conflict in Ukraine would seriously damage US and European relations with Russia and could produce a genuine rupture in ties. There is a spectrum of possibilities here; a collapse in talks leading to mild but escalating sanctions would be less problematic than a real Russian invasion of Ukraine to take sides in an expanding civil war. In either case, however, Russian officials would start evaluating their options in responding to Western policies.

Many of Russia’s possible responses would not directly affect the Middle East, but could have important broader consequences. For example, Russia might cut off natural gas supplies to Europe, leaving European governments scrambling for liquefied natural gas. Alternatively, Moscow could immediately sell all its US Treasury securities, as some Russian officials have suggested publicly. The Federation Council, the upper house of Russia’s legislature, may take up a bill authorizing the confiscation of US companies’ assets in Russia. Implementing any of these would put US-Russia relations into a tailspin.

Looking more specifically at the Middle East, a fracturing US-Europe-Russia relationship might lead the Kremlin to substantially boost its support for Syrian President Bashar al-Assad. If Moscow thinks it has already reached the point of no return with Western capitals, then there may be limited costs in doubling-down on Assad — moving from a policy of limited arms supplies to extensive arms sales and possibly even the provision of Russian advisers or specialists. From a Russian perspective, this approach would simultaneously apply greater pressure on the West and help to consolidate a government that could become a genuine ally in a strategic region. This would complicate Moscow’s uneasy relations with Saudi Arabia, but Russia could create trouble for Riyadh as well if needed.

Russia’s approach to Iran could be even more significant. Iran’s President Hassan Rouhani has been pursuing a possible rapprochement with the United States, but few believe that Rouhani is a fully-empowered “decider” in Tehran. So far, Moscow has seen Rouhani’s approach to Washington as basically constructive, as Russia does not want Iran to have a nuclear weapon and is even less interested in US or Israeli military action or efforts to destabilize the country. More concretely, Rouhani has appeared more willing than his predecessor, Mahmoud Ahmadinejad, to consider accepting a less troubling “substitute” for Russian S-300 anti-aircraft missiles that Iran paid for — and former President Dmitry Medvedev elected not to deliver, as an accommodation to the United States — which would allow Rouhani to drop an Iranian lawsuit over the issue and take the S-300s out of the equation with the United States.

After a real break with Washington, Russia may be willing to do much more for Iran than it has so far and, as a result, Iran’s leadership dynamics become decisive. How would Supreme Leader Ayatollah Ali Khamenei see a major break between the West and Russia? Would it be a demonstration of US/Western determination to impose their preferred governments in Ukraine and elsewhere, as some Iranian conservatives already seem to interpret the crisis? If China appears to offer Russia its tacit support, would Khamenei see a new world order in the making with new and different opportunities for his country? It is difficult to answer these questions, but useful to consider them — if Iran were a willing partner, and China were prepared to buy additional Iranian energy, Russia could supply not only S-300s, but newer S-400s and many other weapons.

Of course, if Russia took provocative steps like these, the United States would develop its own responses and, in the final analysis, is the stronger of the two by far in military, economic and political terms. America would prevail. Unfortunately, the fact that this outcome would be more costly for Moscow would not make it any less expensive for Washington.