While Moscow will be preoccupied with the crisis in Ukraine, its support for a political settlement in Syria will not vary. 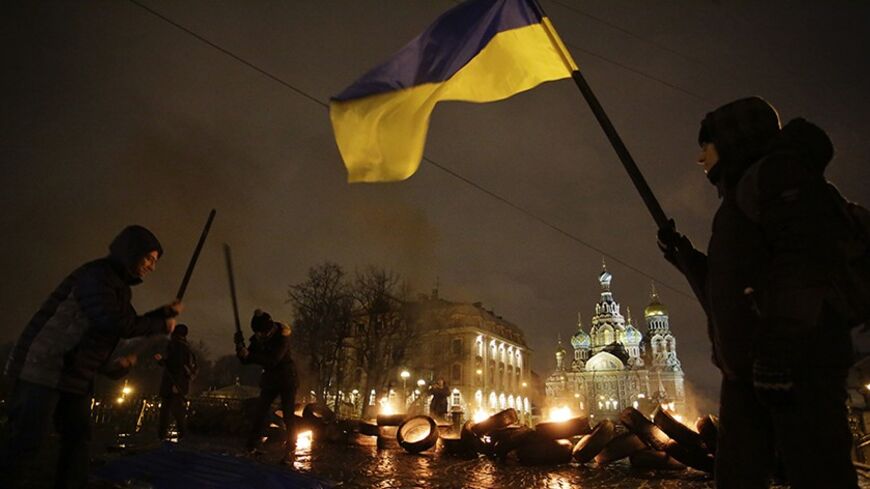 Participants in a performance drum with sticks and burn tires in support of Ukrainian anti-government protesters at the Church of the Savior on Spilled Blood in St. Petersburg, Feb. 23, 2014. - REUTERS/Maxim Zmeyev

Within about 24 hours last week, Russian officials supported UN Security Council Resolution 2139 on humanitarian access in Syria and refused to sign a political agreement between ousted Ukrainian President Viktor Yanukovych and three of his political opponents. (The Russian representative, Vladimir Lukin, would have signed as a witness, alongside three EU foreign ministers, not as a party to the deal.) Taking into account Moscow’s long-standing position on Syria’s civil war — that it supports a Syrian-led political settlement — this may look puzzling on the surface, in that Ukrainians appeared to have reached a settlement of their own.

Nevertheless, it reflects key differences in Moscow’s assessments of the two crises, with important implications. There may also be significant practical linkages between these otherwise distant events.

For those focused on Syria’s tragic civil war and Russia’s role in it, geography is the obvious critical distinction between Ukraine and Syria. Ukraine is Russia’s neighbor, and Syria is not. When combined with resulting historical, cultural, social and economic ties, Ukraine’s future is an existential or near-existential matter for Russia — and Syria’s is not. Accordingly, the mere fact that Ukraine’s government and top opposition leaders had found acceptable terms was not enough for Moscow. (Nor was it enough for protesters on the Maidan, who could not be satisfied so long as Yanukovych remained in power.)

In the short-term, Ukraine’s importance to Russia means that the continuing crisis could rapidly become all-consuming for Russian government officials. It is not a problem for the Foreign Ministry alone — it draws in government ministers overseeing trade and finance, customs and border controls, energy and a host of other issues. Defense Minister Sergey Shoigu and senior generals are in on the act too, directing snap military readiness exercises.

And it will not stop there. Because Ukraine is a major domestic political issue in Russia, where many sympathize with ethnic Russians and the larger Russian-speaking community in Ukraine (not to mention Russian citizens and dual-nationals — there were 30,000 Russian citizens in Syria, so imagine the numbers in Ukraine), Vladimir Putin and Prime Minister Dmitry Medvedev will also be personally engaged — and determined to demonstrate their leadership publicly. This means frequent cabinet meetings (often televised in Russia) as well as Kremlin gatherings of senior presidential administration officials. In this environment, absent developments on the ground requiring an urgent response, Russia’s Syria policy is likely to remain largely on autopilot.

The recent Security Council resolution gives Russia some breathing room; Moscow may not need to do much for a few weeks. Geneva II is stalled and the new resolution allows 30 days for the UN Secretary-General [Ban Ki-moon] to report on its implementation and requests further reports at 30-day intervals, implicitly suggesting that few expect the first such report to catalyze action. By late March, Ukraine may well have calmed down sufficiently to become a routine issue rather than an urgent priority.

Then again, it may not. Over the next few months, Ukraine’s political evolution will probably be a key factor in framing Moscow’s approach to Syria. In the most favorable scenario, Ukraine’s opposition leaders remain largely unified, restrain extreme elements in their coalition, and reach out to regional leaders in predominantly Russian regions in the east and south to launch a dialogue leading to a national unity government. This simultaneously eases Russia’s concerns in Ukraine and limits its leverage there, because the Kremlin’s potential clients are satisfied with the deal they receive — Moscow cannot be more pro-anything than those it attempts to support, just as Russia’s leaders were unable to be more pro-Yanukovych than Yanukovych himself. This path would allow Syria discussions to return to the unsatisfying business-as-usual of the last three years.

In a less ideal world, Ukraine’s opposition-turned-government manages to impose its preferences on the ethnically Russian regions, with rhetorical and financial support from the United States and the European Union. Anti-opposition groups fracture as eastern Ukraine’s oligarchs submit to this, fearing that the economy will collapse without an International Monetary Fund (IMF) package that only the West can deliver, and voices appealing to Moscow for assistance are marginal. Russian officials deeply resent this outcome and look for opportunities for asymmetrical payback in Ukraine or elsewhere. The Russian people are angry too, and encourage Vladimir Putin’s instincts to stand up to the United States and European capitals. June’s G-8 meeting in Sochi is a disaster and Syria diplomacy collapses in a climate of mutual recriminations.

Then there is the worst case. Moderate opposition leaders are unable to tame western Ukrainian nationalists, who are not satisfied with the Verkhovna Rada’s decision (taken almost immediately after the vote to remove Yanukovych) to downgrade the status of the Russian language in Ukraine and are determined to deliver justice to former security officers in disbanded Berkut police units who have taken refuge in Crimea after the violence in the capital Kiev. Regional leaders appeal to Moscow for protection, forcing Putin to choose between intervening (and a total break with the West) or provoking massive demonstrations across Russia exceeding any in the late Soviet or post-Soviet period. Violence in Ukraine would spiral out of control — and the world’s biggest humanitarian catastrophe would no longer be in the Middle East but in Europe. Russia isn’t a big obstacle in Syria because US and European officials now have little time to think about it.

These scenarios are simplistic and exaggerated to provoke further thought — they are not intended to be predictions. They aim to illustrate some of the ways in which developments in Ukraine can affect Russia’s approach to Syria, nothing more. Of course, Moscow will also consider many other factors as its policy evolves, including its long-term interests in Syria (containing extremism, maintaining influence in the country and the region, preserving economic ties, keeping its mostly symbolic naval presence) as well as its assessment of conditions on the ground and the [Syrian president, Bashar al-] Assad regime’s prospects for contributing to or undermining Russia’s wider goals. Broadly speaking, so long as Assad’s position looks sustainable, as it does now, the Kremlin will tend to see the Syrian regime as better for Russian interests than the opposition. Moscow displayed its greatest flexibility when Assad looked most vulnerable.

While many hope that Resolution 2139 will allow for humanitarian help thus far denied to the many needy people inside Syria, Russia seems to have given away very little in supporting what amounts to a consensus-based list of concerns. Moscow will surely oppose “further steps” involving military action — something that few in the West appear to advocate anyway — or UN economic sanctions. Moreover, after succeeding in including language in the resolution calling for the government and the opposition to combat and defeat terrorists in Syria, Russian diplomats may well respond to US or European complaints that Syria’s regime is not living up to UN demands for humanitarian access by asserting that the opposition is not following through in fighting terrorism and asking for “further steps” there, too. Though it is better to have the resolution than not, US Ambassador to the UN Samantha Power’s probable sarcastic response on Twitter will offer little comfort to those she aims to help and little scope for UN-approved action.

This is perhaps a long way of saying that the main problem with Syria diplomacy is the Syrian crisis itself. Ukraine’s impact on Syria is simply to make an already intractable situation even harder to address.

If we’re lucky, the unfolding drama in Europe won’t create complex and costly new problems of its own.