Hamas continues to harness the support from Gaza's large families after curbing their influence following its takeover in 2007. 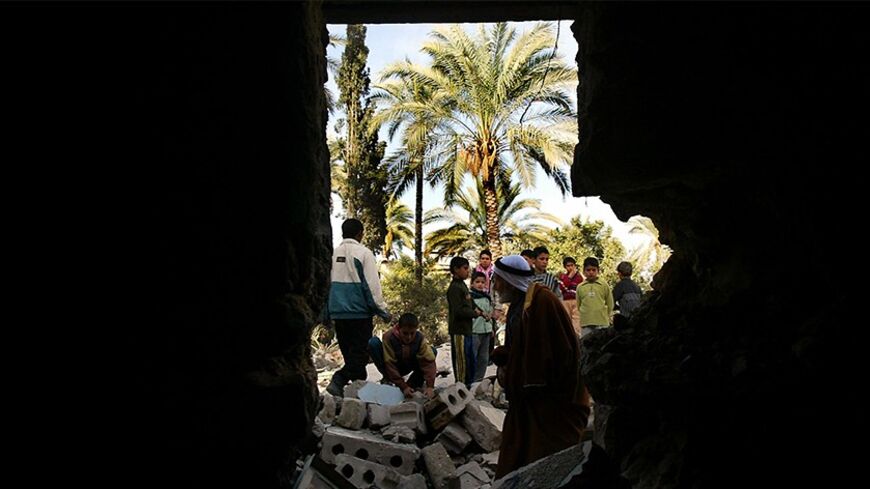 Palestinians check the damage to their house in the Khan Yunis, Jan. 1, 2003. - REUTERS/Ahmed Jadallah

GAZA CITY, Gaza Strip — Hamas has had a fluctuating relationship with Gaza’s large and influential families since taking power. While Hamas benefited from these families to win the parliamentary elections of 2006, it considered them — upon taking control of the Gaza Strip in 2007 — a security threat. Shortly after assuming power, it began to undermine their powers to its favor. Recently, however, it has started to reinforce some of their roles, mainly concerning solving internal societal problems.

The Hamas-led government in Gaza relies on prominent families to solve societal issues and disputes between families, removed from the judicial and governmental institutions.

Hussein al-Serhi, the director-general of the Tribal Affairs and Conciliation Department at the Gaza Interior Ministry, told Al-Monitor that his department helps resolve approximately 20,000 cases per year, through 600 certified mediators spread across the Gaza Strip. “Many people prefer to solve their disputes through the clans and families, because doing so is faster than resorting to the courts, where cases can remain pending for years,” he said.

Given the Islamic ideology embraced by the movement, any allegiance pledged to it must also be founded on an Islamic, religious and ideological basis and not on a tribal one, as is the case of several other political parties. To gain popularity, Hamas relied on its Islamic ideology and military success against Israel. These two factors later would become the points of strength of Hamas and the communication portal with the people through affiliated mosques and charities.

The power of Gaza’s influential families, whose members joined the security agencies of the Palestinian Authority (PA) and created a state of chaos and loose security in Gaza shortly before Hamas took control, was seen by the movement as a threat that must be eliminated to tighten its grip on all sectors. Therefore, Hamas sought to undermine this power through confiscating arms and attacking the gatherings of these families by force in 2007.

In that year, Hamas security forces attacked the Daghmach family, which was accused of killing and shooting a number of leading Hamas members and of kidnapping various foreign journalists, the last of whom was BBC reporter Alan Johnston. Hamas also confiscated arms owned by the Halas family, and arrested some members of security agencies who were hiding at the family’s residence. It also arrested members of the Bakr family, who were accused of spreading chaos and smuggling drugs.

Chaos ended and order and security prevailed again, and Palestinians were satisfied with the new situation, albeit achieved through violent means. Statistics provided by the Mezan Center for Human Rights showed the success of Hamas’ policy in decreasing crime rates caused by large, armed families. In 2013, 14 were killed and 33 were wounded in clashes involving armed families, while in 2006 the numbers stood respectively at 43 and 208.

In an attempt to prevent incitement against families, he added, “We consider the families to be a source of stability in the community, and we resort to them for help in resolving disputes before they reach the courts, through clan and public relations committees. To us, the families are very effective in overcoming many of the obstacles that all Arab societies might face,” he told Al-Monitor.

Hamas and Fatah competed to obtain the political support of such tribes during the 2006 elections. The two movements even fielded some members of these tribes as candidates, representing them in municipal elections in districts that are characterized by a tribal nature.

Hazem al-Shawa, a member of the Shawa family council in Gaza, told Al-Monitor, "The PA, particularly the security forces, exploited some family members to impose its security power and create some chaos in society, through absorbing rebel members of different families."

“Hamas benefited from the elections. However, as an ideological organization, it relies less on families. It used religious rhetoric in the 2006 elections to convince women to vote for its candidates and succeed in this,” Shawa added.

Political writer Hani Habib noted that in various elections Hamas relied heavily on the families because of the latter’s numerical vote casting ability, which could guarantee them electoral victory.

"As a result of the prevailing situation, reliance is great on the ability of families to influence their members despite the decline of that influence in recent years. These families can never be ignored,” Habib told Al-Monitor.

Despite the attempts of Hamas as an Islamic movement to lessen the influence of families after it assumed power, the movement was not oblivious to the tribal aspect in Gaza. It tried to distribute leading positions within Hamas that took into account the familial dimension, and the diversity of families, citizens and refugees, to avoid any internal sensitivity. The movement also took this into consideration when assigning ministries, according to a Hamas source.

“Hamas is cognizant of the nature of Palestinian society, which continues to maintain its tribal and family character. When a committee is being formed, or when an official is to be appointed, social considerations pertaining to refugees, citizens and large families are taken into consideration to gain the support of all parties,” the same source, who requested anonymity, told Al-Monitor.

The government formed by Prime Minister Ismail Haniyeh comprised ministers from large families who hailed from different regions in the Gaza Strip. For example, Mahmoud al-Zahar, from the al-Zaytoun region of eastern Gaza and who has good relations with the families there, was appointed minister of foreign affairs. Meanwhile, members of large families from Khan Yunis, such as the Farra, Ruqab and Agha families, took control of other ministries. Bassem Naim, from a prominent family in Beit Hanoun, assumed the position of minister of health, while Mohammad al-Madhoun, the minister of youth and sports, is one of the prominent members of the Madhoun family, one of the largest families in Gaza.

The most serious threat Hamas could be facing is a potential alliance between Fatah and the tribes. The tribes themselves, however, are divided — seemingly not cooperating with Fatah — and avoiding any confrontation with Hamas, which continues to tighten its security grip on Gaza. Nevertheless, Hamas is concerned about any confrontation with large families and tribes, unless the latter crossed red lines through reintroducing loose security to Gaza, a situation Hamas has largely succeeded in ending throughout its years in power.