Hamas faces mounting criticism from its young supporters in the Gaza Strip, yet is this a healthy sign of organizational maturity or the voice of inexperience? 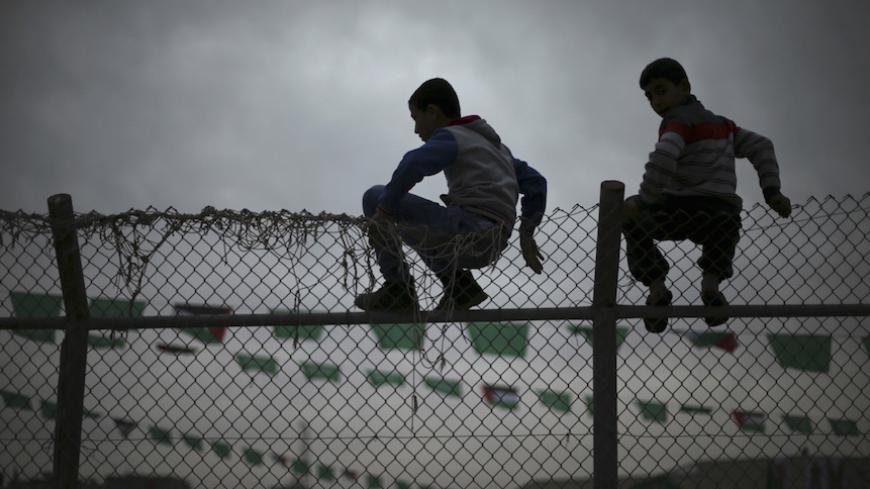 Palestinian boys sit on a fence as they watch a Hamas rally in Khan Yunis in the southern Gaza Strip Jan. 7, 2016. - REUTERS/Mohammed Salem

GAZA CITY, Gaza Strip — Hamas was the product of Palestinian youth efforts in the 1980s, and those young men have grown up and become today’s leaders. Now that Hamas has been ruling the Gaza Strip since 2006, is the role of youth in the movement confined to fighting and media roles, and restricted from leadership? Why is there no leader in Hamas under 40? The movement’s youngest leader is 40-year-old Mushir al-Masri, a Palestinian Legislative Council member from the Change and Reform Bloc.

A 2014 study by the Institute for Development Studies, “Mapping Youth Political Participation in Palestine,” revealed that the participation rate of Hamas youths between 18 and 35 in the West Bank, the Gaza Strip and abroad, is 0% in senior positions, 7% in lower leading committees and 4% in Hamas’ elected committees. These low rates coincide with mounting criticism among the Islamic party's young members.

One young Hamas member told Al-Monitor on condition of anonymity that the party is now highly preoccupied with political interests and social influence. He said, “The party’s leadership is strange to the young people who dedicated their life to this cause. Today, they’re in their 30s with no achievements in their records.” He added, “When the movement was more important than interests, we used to understand the meaning of belonging, as we were revered by the poor more than anyone else. However, a social shift occurred within Hamas after coming into power, giving rise to social disparities.”

He explained that many of the party youths are now concerned with social justice, particularly with Hamas public servants’ salaries unpaid and financial allocations to others cut off. The young man expressed skepticism about any changes in the near future. With a group of other young Islamists, he has considered launching a nonpartisan national initiative. He said, “As members of the '80s and '90s generations, we have come to the conclusion that our ideological education cannot provide solutions to our current problems.”

Ibrahim al-Madhoun, a writer with ties to Hamas, said he considers asking Hamas to go back to what it used to be in the 1980s as illogical. He argued, “Hamas used to focus on charity work while playing a more minimal role with very few members. But now Hamas is keen on expansion and openness, assuming a central role in the Palestinian cause. It is unfair to compare today’s Hamas to that of the 1980s. With 50,000 employees, Hamas now has an extended political leadership and is assuming a regional role. The nature of the current situation dictates combining armed revolution, as embodied by the Izz ad-Din al-Qassam Brigades, with social services, which is government work.”

The criticism voiced by the young Hamas member has become commonplace on social media.

Bilal Abu Shanab is among the young Islamists who dares to speak up, while other Hamas members have taken issue with his views in comments on his posts.

On Feb. 11, Rami Rayan, a young man working in Gaza’s Interior Ministry, criticized the decision to buy 36 new cars for commanders while public servants were working without pay. In reaction, the Hamas police force arrested him.

Rayan’s arrest prompted Abu Shanab to take to Facebook and post on Feb. 23, “At first, the security services’ mission was to protect Hamas from any breach, then their job shifted to fighting delinquency, and after that, they were tasked with protecting Ford cars from vandalism or criticism by pursuing those who don’t like the cars #FreeRamiRayan #We'veHadEnough.”

According to Madhoun, the mounting criticism among the party’s younger generations signals its evolution. He said, “Hamas has reached a point where it can take public criticism from the inside.”

Madhoun added, “The voices criticizing Hamas’ behavior are a sign of power. Hamas is no longer a resistance movement but one that holds the reins of government.” He pointed out, “The youths are satisfied with Hamas’ revolutionary stance and religious commitment. The criticism is aimed at its government performance, which directly affects their lives.”

Another young Hamas member, writer Ahmad Abu Ratima, opposes Madhoun’s views. On Feb. 25, he posted on Facebook, “Everyone welcomed the new climate of freedom of expression that allowed members and supporters to address criticism to their party. … But will all this criticism change anything? What good can come out of the freedom of expression if it’s not going to modify behavior?”

In an interview with Al-Monitor, Abu Ratima said, “Criticism is a sign of vitality and a positive indicator that we are not blindly led on. It shows that we care about Hamas enough to push it to adopt the principles of justice we were raised on. I believe that the party’s future relies directly on such criticism.”

A member of Hamas since childhood and throughout his youth, Abu Ratima added, “Honesty dictates that we come clean, for courtesy and appeasement indicate false belonging.” He highlighted Hamas’ struggle with government crises amid trying circumstances such as the blockade and unpaid salaries. “This is why our criticism is necessary especially since our raison d'etre as an organization is that we are better than our predecessors.”

Speaking to Al-Monitor, Hamas spokesperson Sami Abu Zahri argued that the party listens to the youths' issues at youth cadres and summer camps that host thousands of participants. He said, “The Hamas leadership is generally young, along with the majority of area commands.”

Addressing the criticism, Abu Zahri said, “Some young people are poorly informed about the main issues due to their peripheral involvement. The party should not be held accountable for the criticism it receives from those who take issue with it simply because they seek influence on social media.” He added, “The way things work within Hamas are evolving as a result of expansion. This is why it has been keen to promote nationalism and Islam without entrenching partisanship.”

As criticism from the party's own members mounts, some go as far as leaving it altogether. Others turn to religious radicalism, while some other few find a balance between belonging and criticism.