Palestinian law, both in the Gaza Strip and the West Bank, fails to clearly prohibit incest and does nothing to protect female victims of sexual abuse within families. 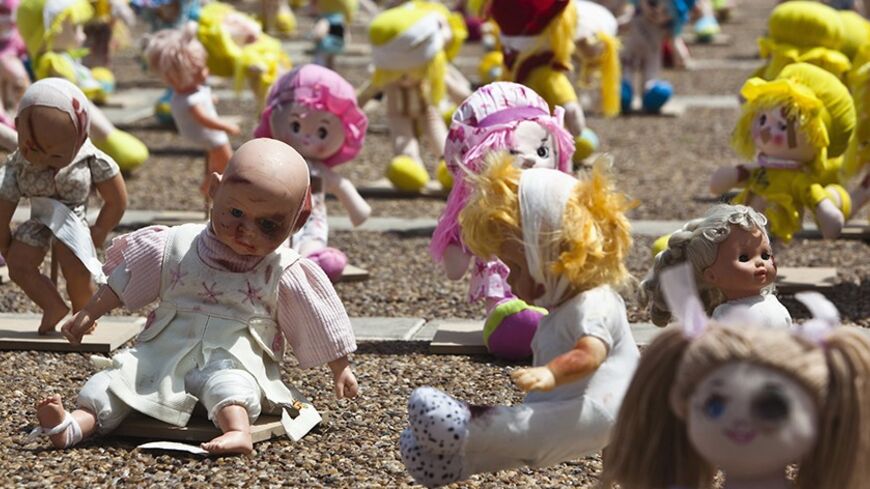 Dolls are displayed as part of an exhibition to raise awareness of child abuse, in Tel Aviv, May 24, 2013. - REUTERS/Nir Elias

GAZA CITY, Gaza Strip — The three Abrahamic religions as well as civil laws and regulations are in agreement against sexual acts among relatives, or incest. Such acts are considered a threat to communities, as they destabilize the core of all societies: the family.

Despite the criminal and social taboo aspects, which humanity is generally in agreement on, some people in Arab and Western societies, including Palestinian communities, continue to deviate from this proscription. Stories are emerging from the Gaza Strip of aberrant behavior that goes against everything that the religious Palestinian community stands for.

Samah is a 23-year-old woman from the northern Gaza Strip driven into prostitution after repeated sexual assault by her older brother.

Samah told Al-Monitor that her brother, a Tramadol addict, first tried to assault her when she was only 16. She then ran away from home and was put into protective custody by the police, until an “honorable” man married her. But her brother resurfaced, threatening to ruin her relationship with her husband if she did not steal for him, which she unfortunately did. This crime led to her arrest, imprisonment and subsequent divorce.

Samah, shattered by the ordeal, returned to her brother’s house, where with the encouragement of the latter and his wife, she also became addicted to Tramadol. Her doped-up body thus became easy prey for her brother, and she grew to find the arrangement normal, particularly when she found out that her three sisters also had sexual relations with him.

Her body trivialized, the girl became a prostitute. Samah was recently arrested, her head uncovered, wearing tight jeans and escorting multiple men in a single night.

The director of the Rafah Governmental Mental Health Clinic, Yousef Awadallah, outlined for Al-Monitor the trauma girls like Samah experience, saying, “Any girl who is sexually harassed or raped suffers great psychological harm, which affects her throughout her life.” He added that the trauma is compounded if the perpetrator is a family member.

Awadallah pointed out that incest is a form of sexual deviancy present in all cultures of the world. Often in cases of incest, the victim employs a psychological defense mechanism called “identification with the aggressor,” whereby she retaliates against the initial perpetrator through new victims of her own.

According to Awadallah, the victimized woman thus develops hatred toward men and an aversion to marriage. “Some girls go down a path of self-destruction as a result of the great shock that they were subjected to, and promiscuity is one of the avenues employed by girls who are assaulted or raped,” he added.

Research into the prevalence of incest and the subsequent sexual deviance of victims reveals that a predisposition to such incidents start at the family level, where societies are born. Hanan Daher, a psychologist and sociologist at the Palestinian Center for Democracy and Conflict Resolution, told Al-Monitor that female victims of incest often head down destructive paths.

“Remaining silent is the gravest of harms that parents can inflict on their daughters. Girls who fall victim to incest usually go down one of two paths: They either become complacent and seek to satisfy their urges through illegal means, or they begin committing crimes in their quest to take their revenge on society.”

Daher added that 80% of female inmates convicted of lewdness in Gaza Prison were subjected from a young age to sexual abuse at the hands of parents or relatives, with some of them being forced to watch pornographic movies and pictures.

Other psychologists point to many social causes behind the rise of incest cases in the Gaza Strip. A mental and social health specialist at Sihati Mental Health Clinics, Ahmad al-Khalidi, said that some cases have emerged in extended families that live under the same roof, when social controls break down in such weakly managed environments. In these close quarters, interaction between relatives is more intimate than that in single-family homes.

“The lack of religious morals among some is a primary reason for that, not to mention that families suffering from incest keep their woes secret, while the failure to punish perpetrators is also leading to an increase in cases,” he said.

Khalidi estimated that five out of every 1,000 people are victims of incest, an unofficial number that can’t be substantiated. He added, “The problem we face is that society’s view of mental disorders in general is erroneous, let alone regarding incest.” He noted that all the aforementioned causes lead to deviant behavior or psychological disorders, whereby “behavioral deviance becomes prevalent, as the act itself is deviant.” He further indicated that people in incestuous relations refrain from getting married.

Article 155 of the Mandate Criminal Code Ordinance, No. 74 of 1936, in force in the Gaza Strip, states: “Anyone who goes to bed, in an unlawful manner, with an unmarried girl over 16 years of age but not yet 21, or aids or helps another to go to bed with her illegally, with the girl being a descendant of him or his wife, or when he is her guardian, or entrusted with her education or care, shall be considered to have committed a felony punishable by five years’ imprisonment.”

Lawyer Fatima Ashour said that the article is deficient in many aspects. She told Al-Monitor, “The text of the applicable law states that raping a female relative is punishable by five years in prison, while it stipulated that the penalty for raping a non-relative girl is 14 years. It is as if its aim is to encourage the raping of relatives; not to mention that it only addressed the rape of a young unmarried relative, without allusion to the rape of an adult married one.”

Ashour added that customs and traditions often forbid the disclosure of incest cases, and fear prevents families from taking action. She added, “Despite some cases reaching the police or prosecutor’s office, the offense is usually amended or the case closed after reconciliation efforts to safeguard the status and reputation of the family.”

In 2012, the Independent Commission for Human Rights issued a report called "Incest: Murder of the Soul," prepared by researcher and lawyer Khadija Barghouti. The author stressed that Palestinian law equated the aggressor with the victim.

Barghouti told Al-Monitor that the report came as a result of legal reviews that she conducted on material relating to the crime of incest. "I came to the conclusion that we needed to legally analyze the laws in force in areas under the control of the Palestinian Authority concerning their legal handling of incest, and whether the law played a positive role in reducing these practices or consecrated discriminatory practices that contribute to an increase of such crimes.”

The Jordanian law in force in the West Bank and that of the Gaza Strip both consider incest a consensual act between male and female relatives. The Gaza law associates free will and percipience with marriage, and deems a married female competent in sexual matters. Therefore, sex between her and a relative is considered consensual.

Bargouti also indicated that the problem with incest does not revolve solely around the punishment ascribed, but with the law that considers men and women equal and willing participants. In other words, the law views them as free to engage in an act, with both held responsible for its repercussions. Logically, Barghouti stressed, punishment should only be leveled against the perpetrator.