Gaza’s society is reeling from the stresses of the last Israeli war, with families falling apart amid great psychological pressure. 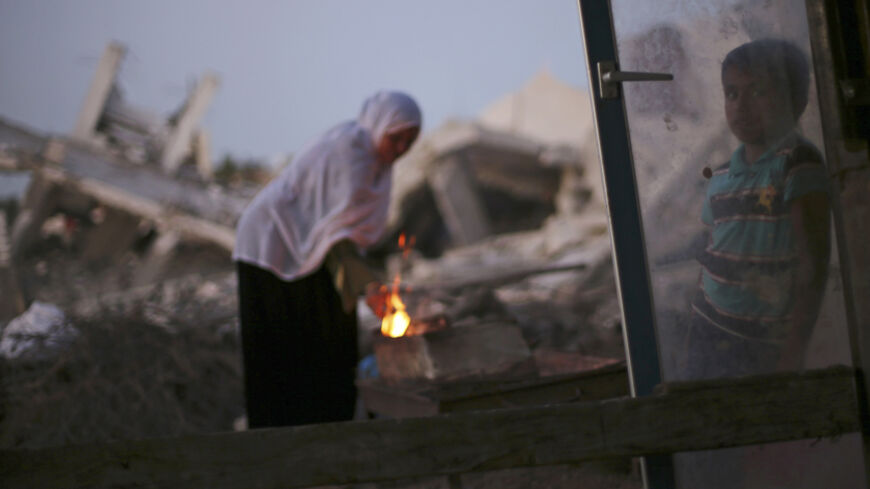 A Palestinian woman makes coffee on a fire outside her makeshift shelter near the ruins of her house, which witnesses said was destroyed during the Israeli offensive in the south of Gaza City, Sept. 8, 2014. - REUTERS/Mohammed Salem

GAZA CITY, Gaza Strip — Hajja Zakia Mustafa, 86, used to sit in front of her house under the sun, chatting with her neighbors to ease her loneliness. Her ground-floor house was perfect for her, as she used to walk a few steps out of it to find herself surrounded with people.

Three months after the war on Aug. 3, during which her home was destroyed as a result of a nearby blast, Mustafa had to move in to her children’s houses, before they all agreed to let her live on the second floor alone. This is when everything changed, and her health started deteriorating. Her weight dropped by half, as weeping and praying became her only consolation in her solitude.

“I sit most of the times by myself. I cannot get used to the flat. I can’t even hear the call for prayer and I don’t see the sun,” Mustafa told Al-Monitor.

She added that, until today, she has not received any compensation. Her son registered the whole house in his name, knowing that a wall separated his place from his mother’s house, and cheated her on compensation.

This phenomenon of seeking personal benefit is not only limited to Mustafa’s son, as it has become a common feature among people in the postwar period.

ِAhmad Khaled (a pseudonym), whose son died on July 25, told Al-Monitor: “My daughter-in-law was pregnant and gave birth on Oct. 1. However, I saw my grandson only once. He is 65 days old now and I think about him every day. He is all I have left from my son.”

The man from the city of Beit Hanoun in northern Gaza said that his son’s widow has deliberately banned him from seeing her child, because of the financial entitlements to his son. “I tried to marry her off to my other son but she refused. She also canceled, in her capacity as his wife, the power of attorney that would allow me to receive the entitlements for my dead son. I do not wish any financial compensation for my martyred son. All I wish for is to see my grandson, who is said to be like his father.”

Psychologist Akram Nafeh confirmed that Gaza’s society is in a state of distress and general frustration following the harsh war and its unexpected repercussions.

“During crises such as wars, people usually become more spiritual. However, once the war is over, material things become of great value, pushing people to look after their own interests at the expense of others. In their subconscious, people believe that making financial gains means that they are still alive,” he told Al-Monitor.

He emphasized the fact that the majority of Gazans are seeking to obtain food aid and to register their names for home reconstruction. Some of them go as far as to lie to receive aid. Nafeh added that lack of trust and safety is the most obvious outcome of major wars, such as the most recent one in Gaza.

“We receive in our clinics, on a daily basis, dozens of cases suffering from social problems and personal conflicts as a result of the destruction of their houses, and from fear resulting from the war,” Nafeh said, conceding there are no statistics on the number of patients at the moment.

Another social problem emerged as a result of the psychological effect of the war. Atef Mohamed (a pseudonym), who is 26 and lives in one of the refugee schools in the Shati refugee camp, told Al-Monitor: “I was about to abandon my family and divorce my wife. I used to have violent fits of anger and would hit my wife and four children, to the extent that I almost killed them once.

“Everything changed after the war. Everything I owned no longer existed. My house in the Shajaiya neighborhood had been flattened, as well as my small shop where I used to sell cell phones. Life is unbearable. I suffered from depression and used to lose my temper. Had it not been for the medication I have been on for about a month, I would have destroyed my family.”

His wife, who also wished to remain anonymous, told Al-Monitor: “During his fits of anger, he used to beat me if I ever spoke or if I fell silent. However, I put up with his violent temper because I love him. Even when he decided to leave us, I clung at him until he found psychological help and started to take the medication.”

Nafeh said the man is suffering from PTSD (post-traumatic stress disorder), which is the case of dozens of other people who visit his clinic. These patients find themselves unable to change the new reality, which causes disorders in their behavior, lack of balance, depression and aggressiveness, especially when they recall what happened and have nightmares. When they go through an experience that might remind them of what happened to them, they become short of breath, with increasing heart rates.

Some observers say that the frustration and distress in Gaza is unprecedented, and that Gazans’ morale was much higher during the war than after it.

To understand this dilemma, psychiatrist Fadel Ashour told Al-Monitor: “The war was an existential shock to Gaza’s community. As a result, people stopped rationalizing and tended to look after their selfish individual interests instead of collective benefits. They lost their empathy. This is not to mention the hidden consequences of war, including social ruptures such as marital disputes, deviant sexual behavior, and lack of trust, self-esteem and confidence. This suggests that people have shallow faith and their political affiliations are much stronger than their religious faith.”

Ashour said a collective obsession exists among Gazans on getting out of Gaza, whether in boats by risking their lives to Europe, or through total isolation from reality. This is when they turn to drug addiction or isolation and become doubtful about everything and everyone.

“I want to warn against the fact that some people would go overboard in their behavior, such as treason or deviance,” Ashour said. "This is especially true despite politicians saying that the people remain steadfast and ready to sacrifice. They fail to see the accumulating problems and tragedies in Gaza’s society."

He added that society is in need of a state with liberal political mechanisms, instead of an ideological rule, even if the latter was the people’s choice at a certain time. Nevertheless, people have rejected the ideological style of life, since Gaza — as any other society — is not a mere dogmatic and ideological system, as many faction leaders perceive it. It is rather a human community.

We left Mustafa waiting for her daughter’s next weekly visit. She keeps the television remote control and the prayer rug next to her, as she waits alone for visits.