President Mahmoud Abbas' ideas of a demilitarized Palestinian state with no sovereignty over its borders are considered by many Palestinians as humiliating concessions. 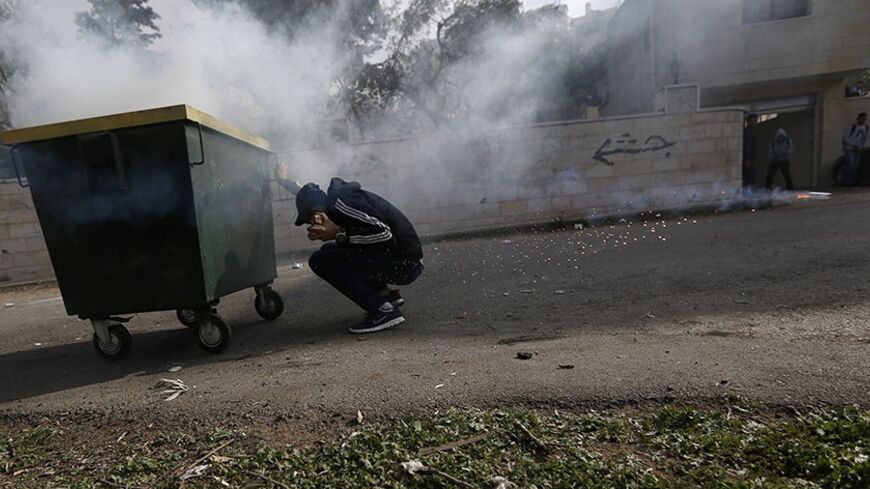 A stone-throwing Palestinian man hides behind a garbage bin as a tear gas canister fired by Israeli forces flies past him during clashes in Birzeit, Feb. 27, 2014. - REUTERS/Mohamad Torokman

At roughly 2:30 a.m. Feb. 27, Israeli jeeps entered the West Bank town of Birzeit, surrounded the Washaha house and ordered everyone out. They had come to arrest Thaer Washaha, an activist in the Popular Front for the Liberation of Palestine (PFLP) who had already been previously imprisoned by the occupation. According to Thaer’s father, the soldiers ordered the men to take off their shirts and forced them to lie down on the cold ground for two hours. The army detained Thaer’s brother, Ramiz, their cousin Fadi Sedqi and another young man Samir al-Qaisi.

The third brother, 24-year-old Mutaz, refused to leave the house and surrender. In a standoff that lasted several hours, the Israeli army fired rockets at the house before going inside and killing Mutaz by shooting him in the chest and head. They then proceeded to demolish part of the house before withdrawing in the early morning.

Of Birzeit’s land, 75% is classified under the Oslo Accords as Area B, where the Palestinian Authority (PA) is responsible for civil matters, but Israel has paramount control in terms of security. The rest of the land is under Area C, where civil and military control is in the hands of the Israeli occupation. The conundrum that even in areas under its jurisdiction, the PA is powerless or forbidden from actively challenging Israeli raids and the aggressive policies of occupation.

Mutaz was the 45th Palestinian to be killed since the PA resumed public negotiations with Israel under US patronage at the end of July 2013. According to a report by the International Middle East Media Center published two days before Mutaz’s murder, Israel has moved to build 10,490 settlement units, arrested more than 2,700 Palestinians and demolished 154 Palestinians houses in the same time period.

On Feb. 18, almost two weeks before the Birzeit killing, nearly 300 Israeli students made their way to Ramallah, the de facto capital city of the PA, and were welcomed by President Mahmoud Abbas at his headquarters, the Muqata. It was an unprecedented move in the history of the PA’s leadership; such an act of normalization would have once elicited an outraged response by the Palestinian people. But as the students, many of them who have already served their mandatory three years in the Israeli army, entered the Muqata, a protest consisting of only a handful of Palestinian youth activists stood outside chanting feebly against the delegation, before the PA security forces forcibly dispersed them.

Rama Amria, a participant in the protest, described it as being heavily penned in by the PA security forces, which were ordered not to let any sign of dissent take place on the streets.

“We were shouting and chanting against the PA and normalization,” Amria relayed to Al-Monitor. “They ripped our posters and beat some of us up. They even attacked the media that were present at the protest. We were confined on all four sides.”

It's no secret that the sham of the peace process, in which two decades of farcical negotiations between the PA and Israel have yielded serious concessions only on the PA’s part, has been used as a cover for Israel to pursue its occupation without the international community holding it accountable.

The willingness of the PA to continue the charade of one-sided negotiations is also on its part a mask to consolidate its own rule and further its profiteering interests. The fact of the matter is that the PA operates as nothing more than a subcontractor for the Israeli occupation. The signing of the Oslo Accords in 1993, which ended the first intifada, ushered in an era mired less in a liberation struggle than in an industry dedicated to institutionalized state-building that operated to maintain the security of Israel — even as Israel continued its occupation.

In other words, the PA took up the role of the local occupier, relieving Israel of the some of the expenses of occupation while heavily relying on foreign donor aid to sustain its industry. A report from 2004 found that public spending from the PA’s budget amounted to no more than 9.5%. Today, over a third of the PA’s budget is spent on security forces, with less than 2% going to agriculture and higher education. The budget deficit in 2013 amounted to over $4 billion, a hugely worrying figure for an economy that relies on international aid.

Opposition to the talks has not only come from the PA’s rival, Hamas, which has regularly condemned the negotiations for compromising Palestinian national principles such as major land concessions and dawdling on securing the fate of 6 million refugees. Last summer, the leftist PFLP organized a protest against negotiations in Ramallah and was subsequently attacked by PA riot forces. And in 2012, as the PA restarted talks with Israel without any preconditions, a youth movement calling itself Palestinians for Dignity protested vociferously for the first time outside the Muqata headquarters.

The negotiations are brokered by US Secretary of State John Kerry, whose framework largely revolves around getting the PA to accept Israel as a Jewish state in addition to consenting to recognize the majority of the illegal settlements in the West Bank, with a militarized Israeli presence in the Jordan Valley

Last month, Abbas suggested that NATO be stationed indefinitely in the future state of Palestine, acknowledging that the state will be demilitarized and have only a police force. This is how the PA characteristically works, demonstrating time and again how much confidence it has lost with the Palestinian people by stubbornly engaging in the impossible two-state discourse.

Abbas is content with having a demilitarized "state" with no sovereignty over its borders or even a national defense force — an embarrassing ambition, considering that Israel as the occupier would have to make no such concessions for its own future and security.

It's evident — given the discrepancy in the power dynamics between the Israelis and the Palestinians — that the PA continues to participate in this charade as a survivalist tactic. From its inception, it was only ever meant to be a five-year interim government, yet the top officials are eager to perpetuate the status quo to align their positions in power and to exploit what they can from the negotiations to further their own interests.

As the PA mimes outrage at Kerry’s absurd proposals such as offering Beit Hanina, a Jerusalem neighborhood, as the future capital city for the “state of Palestine” and swings back and forth on accepting Israel as a Jewish state, frustration, paralysis and depression plague the Palestinians. The murder of a young man from Birzeit who refused to surrender to the Israeli military occupation served as a reminder that despite the national selling out by the Palestinian leadership, there are those from the Oslo generation who still believe in the cause.