The PFLP will continue to vocally oppose peace talks with Israel, but will not aggravate tensions with the Palestinian Authority following the police crackdown on July 28. 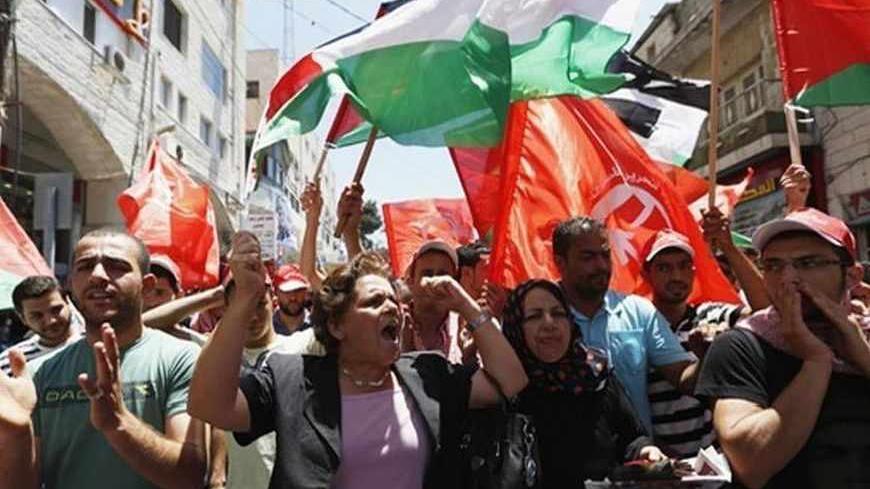 Palestinians wave Palestinian and Popular Front for the Liberation of Palestine (PFLP) flags during a protest against the renewal of stalled peace talks with Israel, in the West Bank city of Ramallah, July 28, 2013. - REUTERS/Mohamad Torokman

On July 28, the Popular Front for the Liberation of Palestine (PFLP), a leftist political party, protested in Ramallah against the recommencement of negotiations between Israel and the Palestinian Authority (PA).

Around 200 protesters marched through the streets of downtown Ramallah before heading toward the PA compound in Muqata, where PA riot guards, armed with batons and shields, met them halfway. Clashes broke out after riot guards tried to grab the large banner denouncing the negotiations, with Khaleda Jarrar — a member of the PFLP and the Palestinian Legislative Council — being one of the assaulted. Four of the riot police were also injured after the protesters threw rocks and beat them with the flagpoles they were carrying.

Hanin Nassar was one of the demonstrators who was beaten up and later taken to the hospital. She described to Al-Monitor how they were surprised to find the riot guards waiting for them and not the police, as was customary.

“It was evident that the riot guards had an order from above to attack us,” she said. “They were being provocative while we were still chanting, and they hit me while I tried to take back the banner they snatched from us.”

By then, Nassar had managed to slip behind the ranks of the riot guards, but tried to go back to the protest as she saw four guards descending on one fellow demonstrator with heavy blows.

“The man fell to the ground. I felt myself grabbed by another four members of the riot police, and they began raining their batons all over my body. The last blow was to my head, which left me bleeding,” she recounted. “I went with the injured to Ramallah hospital, where the PA police was already waiting for us.”

Five protesters were arrested at the hospital while they were receiving treatment, as the police demanded to see their IDs and placed them under guard in the hospital rooms before they were taken away to the police station. That night, another protest took place outside the police station calling for the release of the five arrested. Dozens of Fatah supporters formed their own counterprotest, and began chanting in support of President Mahmoud Abbas. They chanted, “The people demand the fall of the PFLP,” in response to the protesters who were shouting, “The people demand the liberation of Palestine.” The five protesters were released shortly after midnight.

Jamal Nazzal, the Fatah spokesman, accused the protesters of blasphemy and of supporting the Muslim Brotherhood. On his Facebook page, Nazzal wrote, “The Palestinian police force professionally broke up a gathering of people who were cursing God and chanting for the Muslim Brotherhood in Egypt. No one can understand the effect of these atheists and their affiliation to extremists … the police exercised their right by law in preventing the scoundrels from reaching the grave of Yasser Arafat [located in Muqata] and desecrating it.”

The prisoner rights group Addameer strongly condemned the violent suppression of the protest and considered the attacks carried out by the riot guards “an illustration of the continuing political suppression that the PA practices against the Palestinian people, despite their right to express their refusal of the PA’s policies.”

Omar Shehadeh, member of the Central Committee of the PFLP, announced on July 28 that the party will embark on a popular campaign to overthrow the Oslo Accords and to restore legitimacy to the Palestinian people as the lawful decision-makers.

But as PA and Israeli officials sit down in Washington on July 30  for the first round of talks since 2010, Sunday’s protest and the attacks by the PA forces were unsuccessful in triggering a chain reaction of spontaneous demonstrations across the West Bank.

“There won’t be an escalation of events,” Jarrar told Al-Monitor, “but a continuation of popular movements against the negotiations and against the PA’s policy of acting against the will of the Palestinian people.”

The popular movements will include a series of events — including protests that will be organized in the West Bank, Gaza, the occupied 1948 territories and in the diaspora — which Jarrar said will be announced in detail on the official PFLP website.

Yet, failure to capitalize on the PA’s show of force by mobilizing and calling for more immediate protests will most likely cause the violence committed against the protesters to be swept under the rug. In the absence of mounting national pressure on the PA, the government will continue to praise the negotiations as the means for national achievements, such as the gradual release of 104 prisoners who have been in Israeli prisons since before the signing of the Oslo Accords. It should be noted that these prisoners were meant to be released before Oslo was signed.

The PFLP protest and the heavy response from PA security forces show that Palestinians remain polarized over peace negotiations with Israel, which have amounted to little two decades after the Oslo Accords were signed.