The twilight of Maariv in Israel

The Israeli daily Maariv, currently on life support, was once "the most widely read paper in the country." 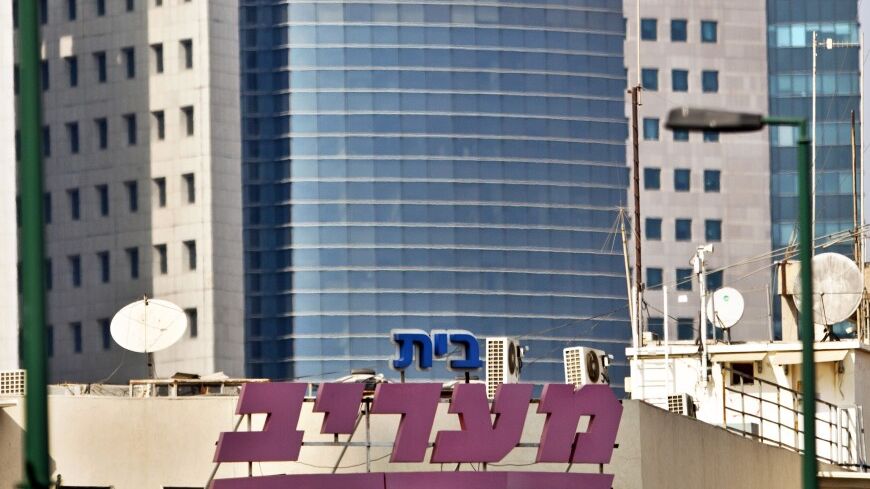 The logo of Maariv, one of Israel's largest tabloid newspapers, is seen on the newspaper's building in Tel Aviv, Sept. 9, 2012. - REUTERS/Nir Elias

Maariv Junction, which connects Begin Avenue and Yitzhak Sadeh, Carlebach and Lincoln Streets [in Tel-Aviv] is one of the best known and busiest intersections in the country. Say, “Maariv Junction” and every Israeli will know where it is. Almost all the roads in Tel-Aviv lead from Maariv Junction and to Maariv Junction.

For decades, in full grandeur, on the corner of Begin Avenue and Carlebach Street, stood the expansive building that gave the junction the name of the newspaper published within its walls, and the adjacent Carlebach Street — which bears the name of the man who founded the paper and edited it in its first years, Ezriel Carlebach. A few weeks ago, workers climbed to the roof of the Maariv Building and uprooted the giant red letters that spelled its name. Now the building stands desolate, its entrance abandoned, its windows half opened, and some of its air conditioners removed. Thus passes the glory of the world.

Maariv, which until the 1970s printed the slogan, “the most widely read paper in the country,” on its first page, is now breathing its last breaths. If a last-minute miracle doesn’t happen, it will turn into the latest victim in the expanding cemetery where defunct Israeli newspapers are buried side by side.

It was on its deathbed for quite a long time, for long and agonizing years. Publishers came and went, and the newspaper gradually lost its status and its appeal. It seems that in the ruthless competition that developed over the heart and pocket of the Israeli reader, Maariv struggled to present a worthy alternative. Other newspapers reduced their format, went yellow, offered sparkly headlines, and marketed light news and gossip in an unrelenting attempt to win a place in the newspaper market. Only Maariv was notable for its conservatism and its desperate attempts to cling to the past.

Even when words lost their importance in light of a combination of stunning photographs and attractive graphics, Maariv continued to offer its readers "long form" articles, analysis and commentary. The Israeli reader who looked for shortcuts was drawn in by the formula offered by its archrival, Yedioth Ahronoth. In the Israeli landscape there is no other newspaper that comes close to the overwhelming success of this paper, which sought and found a winning combination that captured the hearts of young and old, Ashkenazi [Eastern European] and Sephardi [Middle-Eastern], secular and religious, right-wingers and left-wingers, men and women. The hundreds of thousands of copies it sells on the weekend have made it an integral part of the definition of Israeliness.

Many newspapers have tried to copy Yedioth Ahronoth and to mimic its magic formula. They fell and disappeared, and Yedioth remained alone at the top. One day, at the beginning of the 1990s, the stolid and conservative Maariv astounded its readers and totally changed its appearance. The similarity between it and its rival was perfect, and aside from the different name, it was hard to find any differences — the same headlines, the same news items, the same photos, the same graphics. In a bold attempt to draw new young readers, the newspaper went for broke. Veteran readers fumed and threatened to leave it, and younger readers never came.

The more it tried to preserve what remained of its status, Maariv was defeated and failed time after time. Editors-in-chief came on board one after the other, but all of them abandoned ship, leaving behind them despairing journalists. Once the most widely read paper in the country, Maariv turned into the second largest, trailing Yedioth Ahronoth by far.

And then an event occurred that caused an earthquake in Israeli journalism. On July 30, 2007, the first edition of Israel Hayom appeared, a new newspaper distributed free to passersby. The owner, American billionaire Sheldon Adelson, was tired of what he called the one-sided coverage of the right and of his friend Prime Minister Benjamin Netanyahu in the Israeli press, and he established a newspaper meant to give both a more favorable coverage.

What started as a financial adventure to benefit a friend serving as prime minister quickly turned into a resounding success. In its forward march, the new freebie paper trampled everything in its path. Israelis who used to pay full price for a paper now got a newspaper for free. They didn’t even have to make an extra effort to get it. Wherever they turned, a newspaper deliverer would hand it out for free.

This was a death blow for Maariv. The paper struggled to break its fall and offered itself to the highest bidder. Without an onslaught of buyers, Maariv was sold in September 2012 to businessman Shlomo Ben-Zvi for a very low price. A month later, on Oct. 23, 2012, the newspaper appeared with a front page empty of any news content, and in the center a request/ plea from Maariv’s staff to their readers to allow them to publish a worthy paper. It didn’t help. From day to day the newspaper continued to bleed readers, and its distribution diminished to frightening proportions. The latest exposure data for the second half of 2013 sank to a rate of only 3.5%.

“The newspaper lives today on artificial respiration, and we’re all waiting for a buyer to come and save it from its agony,” Shalom Yerushalmi, Maariv’s political commentator, told Al-Monitor. Two weeks ago, the paper stopped appearing during the week and was distributed in a reduced format only on Fridays. The publisher, Ben-Zvi, put it up for sale. Yerushalmi, with more than 130 other journalists, was put on furlough until the newspaper’s fate is known. Up until now, no one has appeared ready to take on the burden.

Yerushalmi, who has worked at the paper for more than 30 years, is convinced that the covenant between Netanyahu and Sheldon Adelson was what brought Maariv to death’s door. “The man who brought Israel Hayom to Israel is the one who brought about Maariv’s ruin,” he said this week, struggling to contain his anger. “I want to say that almost certainly Netanyahu and Adelson seek to take over the Israeli media market. It’s a rough blow to Israeli democracy.”

In the meantime, the Maariv Building stands as a sad monument to bygone days, when Maariv was a symbol of Israeli media. The building is to be demolished. A 55-story commercial tower is supposed to be built in its place.