Some Iraqi Kurds are worried that the potential fall of Turkish Prime Minister Recep Tayyip Erdogan might result in a reversal of good relations between Erbil and Ankara. 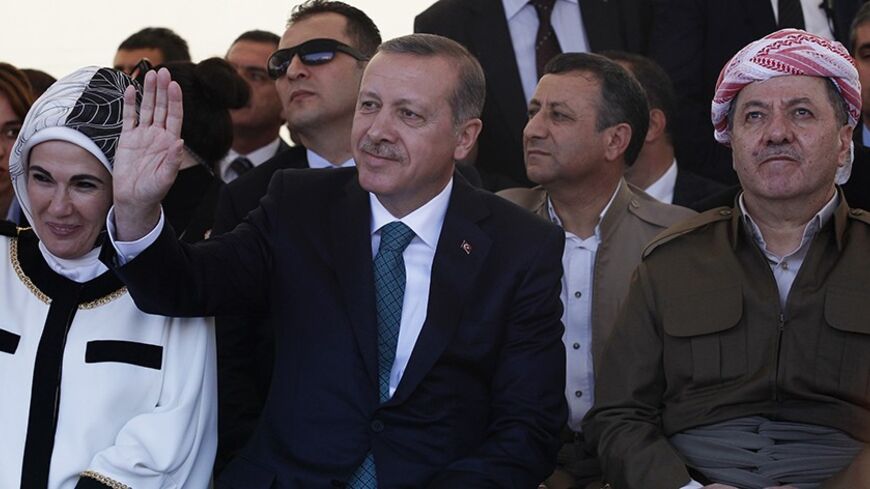 ERBIL, Iraq — The Kurdistan Regional Government of Iraq (KRG) has had a blossoming political and economic relationship with Turkey since 2009. After the Arab Spring, KRG President Massoud Barzani became one of the few friends Turkey has left in the region. With rising internal problems in Turkey amid upcoming elections, Iraqi Kurds wonder about the future of Turkey’s Prime Minister Recep Tayyip Erdogan.

The open war between former allies — Erdogan’s Justice and Development Party (AKP) and the Fethullah Gulen community — is also affecting the Kurdistan region. The Gulen community operates 18 schools in Iraqi Kurdistan with approximately 5,000 students, many coming from the Kurdish elites.

Pro-AKP media accused the Gulen movement of running spying centers in Iraqi Kurdistan that tapped the phones of pro-AKP Turkish businessmen who insulted Kurds while signing business deals with the KRG for $1 billion, according to Peace and Democracy Party (BDP) MP Altan Tan in the Turkish parliament. “And Massoud Barzani, if you let these two ignoble people to win those contracts, shame on Kurdistan and shame on you!” he said.

Relations between the Erdogan government and the KRG have improved dramatically in recent years. “In the past, our relationship with Turkey was not official. Before it was with the [Turkish] intelligence service or the military. But now it’s officially on a political and an economic level,” Jafaar Eminki, spokesman for Barzani’s Kurdistan Democratic Party (KDP), told Al-Monitor.

In 2009, Turkey’s Foreign Minister Ahmet Davutoglu paid the first official visit to Erbil, with the Turks opening a consulate in the city. Now, almost half of registered foreign companies in Iraqi Kurdistan are from Turkey.

Energy-poor Turkey wants to benefit from Iraqi Kurdistan’s proximity to Turkish borders and make itself less dependent on Iranian and Russian gas in the future. The KRG began piping oil to Turkey without the approval of Baghdad this year. But so far, the 1 million barrels of crude being held in tanks in the oil hub of Ceyhan have yet to be sold. “We are waiting for an agreement with Baghdad,” Bakir said.

According to the International Crisis Group, Barzani’s party hopes that Turkey’s thirst for oil and gas will align with their own thirst for Kurdish statehood. The KDP wants to make the Kurdish region economically independent from Baghdad. But not all Kurdish parties in Iraq support this, in particular those with close ties to Iran.

Also, members of Jalal Talabani’s Patriotic Union of Kurdistan (PUK) see the relationship as too dependent on Turkey, and want a better dialogue with Baghdad. “We have to be careful not to be misled by Turkey, which might eventually come to terms with Baghdad and make us lose what we already have,” Adil Murad, co-founder of the PUK, told the Sulaimaniyah News Network.

Both Iraqi and Turkish Kurdish parties do not enjoy good ties with the AKP’s rivals. The secular Republican People’s Party (CHP) has warmed up to the Gulen movement, which opposes the peace process. The ultranationalist Nationalist Movement Party (MHP) is vehemently opposed to any form of Kurdish autonomy in the region. Both the MHP and the CHP have been critical of Turkey’s ties to the KRG at the expense of greater ties with Baghdad.

The PKK is not a fan of the Turkish ruling party, but also sees no alternative to it. Acting PKK leader Cemil Bayik told the Turkish newspaper Vatan that the CHP can only come to power if it takes radical steps in the Kurdish problem and Turkey’s democratization. “In its present state, it is far from coming to power or solving the power problem. Can the MHP solve the power problem? It is clearly far from that.”

But former Turkish ambassador to Iraq, Murat Ozcelik, said that although certain parties criticize KRG-Turkey relations, this would not change Turkey’s foreign policy toward the KRG even if the government changed.

“This policy of Turkey enhancing its relations with the KRG will not change. It’s irreversible. And mind you, don’t get discouraged by the coming debates in Turkey. We are now in an election period,” he said in a conference in Sulaimaniyah on March 5, attended by Al-Monitor’s Turkey Pulse.

The KDP is still confident the AKP will win the elections despite corruption allegations against the ruling party. Some observers in Erbil believe the graft probe hasn’t had a major impact on public support for the AKP.

“According to some friends and new polls, the AKP is not going to lose,” Hemin Hawrami, the head of the KDP’s foreign relations, told Al-Monitor.

On March 15, Davutoglu and Nechirvan Barzani announced plans to build a new bridge between Turkey and the KRG and open five more border gates, further testimony to the growing relationship.

“We hope we will have the same relationship with whatever party comes to power,” Eminki said.