Fear of another Green Movement influences perceptions of Ukraine

Some Iranian conservatives believe that what's happening in Ukraine is similar to what happened in the 2009 Green Movement protests in Iran, but these allegations are rejected by activists and Reformists. 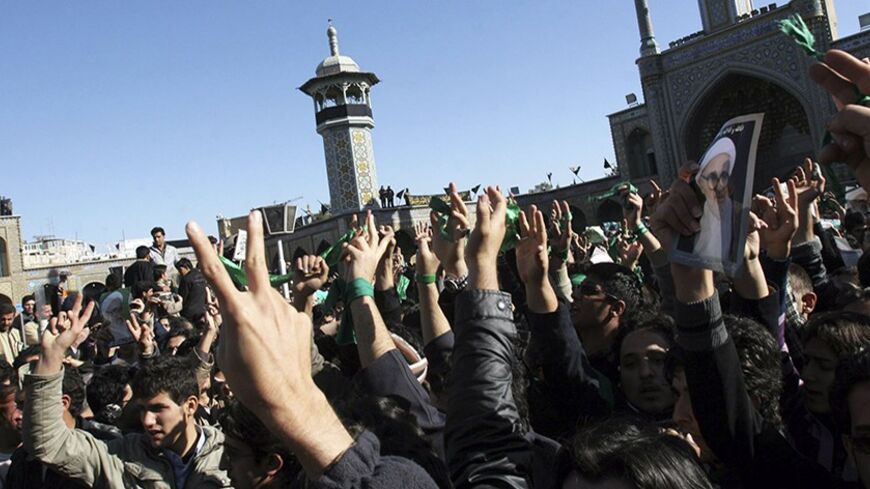 Supporters of the Iranian opposition movement wear green during the funeral of Grand Ayatollah Hossein Ali Montazeri in Qom, Dec. 21, 2009. - REUTERS/via Your View

TEHRAN, Iran — Much of the Iranian reaction to the events in Ukraine can be viewed through the lens of the 2009 post-election uprising and its immediate crackdown, even dividing the media and officials along those lines.

“Changing the name of the square in Kiev, capital of Ukraine, from ‘independence’ to ‘euro’ is a clear sign that this movement, supported by the United States and Europe, is pushing Ukraine away from independence toward dependency,” said Maj. Gen. Hassan Firouzabadi, the chief of staff of the Iranian Armed Forces.

Last week, Kayhan newspaper, which is managed by Supreme Leader Ayatollah Ali Khamenei’s representative, Hossein Shariatmadari, published an editorial in which the crisis in Ukraine was described as the conflict between the Kremlin and the “enemy” of the Islamic Republic of Iran.

The editorial's author, Sadollah Zarei, a theoretician who works for the Iran Revolutionary Guard, described the enemy as “the West,” but did not elaborate.

Inside Iran, however, some say that the recent events in Ukraine represent to the hard-liners more than just a disagreement between Russia and the West, and that it has reopened an old psychological wound.

“For the government, Ukraine is the symbol of the velvet revolution,” said a Green Movement activist to Al-Monitor on condition of anonymity. “A lot of people believe that the post-election demonstrations in Iran in 2009 were influenced by the Orange Revolution of 2005 in Ukraine.”

The activist said: “Certain groups in the establishment are worried that with the fall of the corrupt government in Ukraine, members of the Iranian social movement might think that if [President Hassan] Rouhani’s administration fails to push for a major improvements, they, too, can once again return to the streets.”

A more candid opinion regarding the recent developments in Ukraine was expressed by Justice Minister Mostafa Pourmohammadi soon after the initial victory of the opposition forces in Ukraine. While most Reformist newspapers had celebrated the release of Yulia Tymoshenko on their front pages, hard-liners lamented President Viktor Yanukovych’s ouster.

Pourmohammadi, one of the few conservatives in Rouhani’s administration, criticized the newspaper headlines, saying: “Our country and our establishment is not comparable to such places [Ukraine]. Those who are hoping for a different order should not fool themselves and think there are any possibilities for them here, nor should the friends and supporters of our nation, our revolution and our establishment feel that there is anything to worry about.”

Before the start of the unrest in Iran and the emergence of the Green Movement, two days before the presidential elections, Commander Yadollah Javani, head of the Sepah political bureau, said: “Velvet revolution would be quashed before it is born.”

In the interview with the periodical Sobh-e-Sadeq, which belongs to Sepah, Javani said, “Using a particular color for the first time during the election campaigns indicates they are preparing the ground for a velvet revolution.” He was referring to the election campaign of Mir-Hossein Mousavi, the Reformist candidate, who had used green as his campaign color.

On June 20, 2009, one week after the start of the daily demonstrations by millions of the Green Movement supporters, Sepah used force against the demonstrators, and by killing dozens of protesters and arresting thousands more, managed to temporarily calm the streets.

One day before this massive killing, during the Friday sermon, the Supreme Leader Ayatollah Khamenei accused the United States of attempting to bring about a velvet revolution in Iran, saying, “The incidents occurring inside the country have misled some of those outside our borders, who imagine Iran to be the same as Georgia. A Zionist-American capitalist a few years ago, had been quoted in the media saying that he had spent $10 million in Georgia to start a velvet revolution; I removed one government and brought in a new one.”

He continued in an angry tone: “Those idiots think that the Islamic Republic, Iran and this great nation is like that country [Georgia]. How can you compare Iran to such a place?”

Less than three months later, in September 2009, Maj. Gen. Mohammad Ali Jafari, commander of the Sepah, said in a speech: “Many say that we should not use the term ‘velvet revolution’ since there is no possibility for it in Iran. However, in many countries, such revolutions have emerged during the course of an election.”

A Reformist journalist in Tehran told Al-Monitor that despite their fears, what happened in 2009 was unique to Iran and not inspired by outside events.

“It is really difficult to say that the Green Movement was inspired by the demonstrations in Ukraine four years before the 2009 elections,” he said. “It is, of course, true that the goals were the same and we had our own color. But … if we had not seen the developments in Ukraine and in Georgia, would we not take to the streets and protest? I am sure that we would. If the Iranians were to be directly influenced by the international and regional developments, without taking their own social and political realities into consideration, then they should have attempted to bring down their government after the Arab Spring in 2011. Instead, two years later, they chose to once again take part in the elections.”

Right-wing media reactions to the developments in Ukraine prompted Sadegh Zibakalam, a professor at Tehran University, to write an open letter to the people of Ukraine apologizing for what the right-wing analysts in Iran were saying about their country.

“Although Russia has forcefully violated your territorial integrity, in spite of all the international laws that forbids it to do so, and has named your uprising a 'coup d'etat' and an 'act of banditry,' the Iranian government-sponsored media and analysts are only talking about the Western powers and their plans of gaining influence in Ukraine.”

Zibakalam, who's frequently quoted in the Reformist media, continued: “Please remember that just as the freedom-loving people in Russia protested in the streets of Moscow against their government’s aggression toward Ukraine, many freedom-loving Iranians are also supporting your cause.”