The Iranian police commander in charge of the Special Unit of the Law Enforcement Forces said some mistakes had been made. 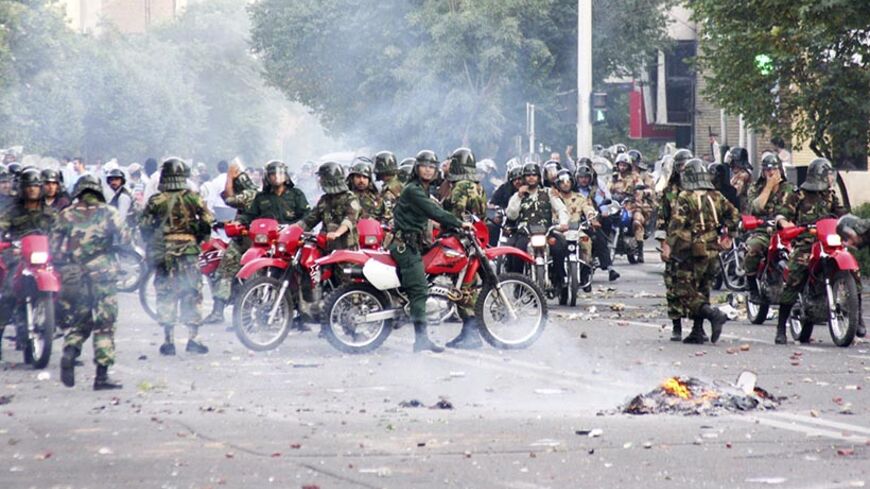 A correspondent in Tehran
September 2, 2014

Five years after the bloody conflicts that erupted following the 2009 presidential elections, the new commander of the Special Unit of the Law Enforcement Forces (LEF) of the Islamic Republic of Iran discussed the current state of anti-riot forces, comparing them with 2009, during an interview with Tasnim News, a news agency with close ties to the Islamic Revolutionary Guard Corps (IRGC).

In July 2014, the commander of Esfahan Law Enforcement Forces, Hassan Karami, was chosen as the head of the Special Unit, which was one of the main forces involved in suppressing Green Movement followers during the 2009 post-election unrest.

Karami said their equipment has been updated since 2009. “At the time of the sedition of 2009, we did not have secure vehicles that could enter the crowd without being damaged. There was always the possibility of damage to our personnel,” he said. ”Now, however, we are equipped with secure vehicles when we need to control the riots.”

Karami also mentioned that they now have equipment including tear gas, laughing gas and electronic loud noises at their disposal. “Previously, we had a type of water spray that was called ‘heavy’ water spray. Now, however, we have five different types of water sprays, 18 tons, 5 tons and 2 tons, as well as four-wheeled engines. We have a variety of water sprays and each of them can be used depending on the situation.”

Dealing with riots, anti-terrorist activities and rescuing hostages are among the most important duties of the Special Unit. In most countries in the world, these forces have expanded and Tehran alone has four major units. The popular belief, however, is that the Special Unit plays the major role in suppressing riots.

Esmail Ahmadi Moghadam, the commander of the Law Enforcement Forces, announced in February 2013 that the Special Unit has 60,000 members and, “They are very flexible and have the ability to move from location to location. They arrive at the location of threat with complete knowledge about the situation.”

On June 14, 2009, after the results of the presidential elections were announced, students protesting the results gathered around the dormitories in the Tehran University complex. A few hours later, the Special Unit took over the dormitory area.

A member of the Islamic Iran Participation Front (Jebheye Mosharekate), a major Reformist faction which was disbanded five years ago, told Al-Monitor, “The members of the Special Unit of the police, who were there to protect innocent civilians, were being so violent that paramilitary forces such as the Basij and Ansar-e-Hezbollah, who are famous for their brutality, were screaming at them not to beat the students anymore.”

From June 15-20, 2009, the protesters, who were encouraged by Mir-Hossein Mousavi and Mehdi Karroubi to protest the results, were present in the streets. Eventually, on June 20, they were brutally suppressed. On that day, however, Basij and Sepah had joined forces with the members of the Special Unit of the Law Enforcement Forces to make sure that the situation was kept under control.

A journalist who was present in the demonstrations said of the Special Unit's role, “It is true that they were quite brutal and the way they were beating people could have resulted in brain damage, serious injuries or even death. However, I don’t remember them shooting at people. That part was done by members of the Basij and Sepah.”

A member of a board of editors of a Reformist newspaper, who spoke to Al-Monitor on the condition of anonymity, believed that those comments made by Karami is his trying to restore the “gravely damaged reputation” of the Special Unit. “After the 2013 presidential elections when Rouhani was elected, somehow the hostile atmosphere between the dissident citizens and the establishment was gone, since many of those dissident citizens had voted for Rouhani,” he said. “Many military and law enforcement organizations are trying to wipe away the memories of their brutality from people’s minds. This is particularly true about the Law Enforcement Forces that are in daily contact with the citizens.”

Karami, however, does not think that the election of a new president is the reason behind the current calm in the country. He said, during his interview with Tasnim News, “I think that the current calm and stable situation is the result of a process that started in the past and that it is not accidental. I don’t think we can link it to the election of a new president. There has been a process and it shows that our people have reached a level of maturity. They look at the unstable situations in the neighboring countries and compare it with the stability that exists inside Iran. This motivates them to cooperate with the government.”

Nonetheless, evidence shows that the Special Unit is still preparing itself for dealing with riots and unrest. A notable part of Karami’s interview was where he described the most skillful branch of the Special Unit, known as NOPO. Karami said that NOPO, which was previously known as “Counter Terror Special Force” is now known as “Special Force Protecting Velayat.” (“Velayat” is a reference to velayat-e faqih, or "governance of the jurist," Supreme Leader Ayatollah Ali Khamenei’s religious and political position in the power structure of Iran.)

The distinction of "velayat" is an important one in that it gives the unit far more discretion and authority than a regular police unit. After the student demonstrations in 1999, the Supreme National Security Council announced that members of NOPO had entered the dormitory area of Tehran University. Farhad Arjomandi, then commander of NOPO, was tried and during his trial he strongly defended NOPO members who attacked students at the dormitory. He was eventually cleared of all charges. Following this incident, Reformist newspapers who at the time they had considerably more freedom than today, claimed that NOPO in fact meant, “Special Forces Protecting Velayat.” The Law Enforcement officials, however, strongly rejected any such interpretations NOPO and they continued to reject this idea until Karami’s latest interview.

That the commander of the Special Unit is confirming that the real meaning of NOPO is “Special Forces Protecting Velayat” and putting aside its counterterrorism activities (NOPO is supposed to battle thugs and hostage takers), can be because he's trying to come clean about the role that NOPO played in suppressing the demonstrations and to make it known that NOPO is one of the special forces defending Khamenei.