Iranian activists, many of them Reformists who were arrested during the 2009 post-election crackdown, show their support for Gaza independent of pro-conservative demonstrations. 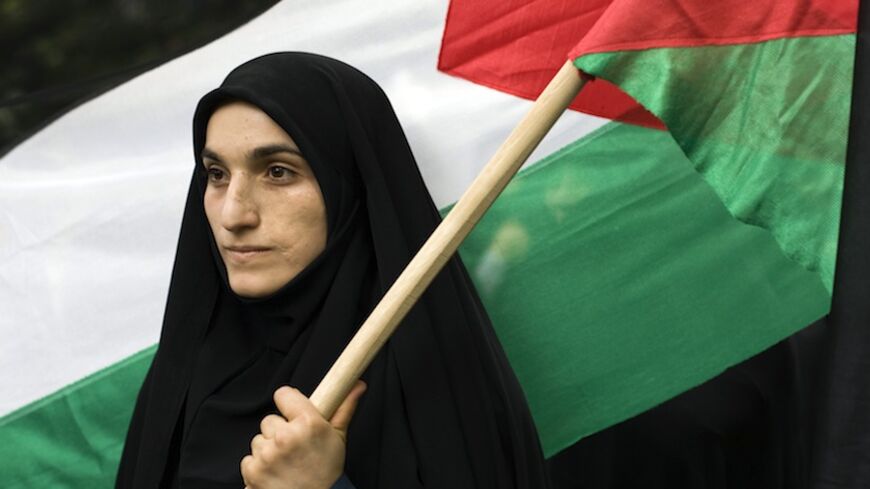 A woman holds a Palestinian flag outside the United Nations headquarters building in Tehran, May 31, 2010. -

A correspondent in Tehran
August 3, 2014

Less than five years ago during the post-election protests of 2009, on the last Friday of Ramadan, known as Quds Day (Jerusalem Day), hundreds of thousands of followers of the Green Movement took to the streets of Tehran following a call to participate by the movement's political leaders, Mir-Hossein Mousavi and Mehdi Karroubi. The protest included slogans criticizing the Iranian government’s foreign policy toward Palestine and Lebanon, the most famous being: “No to Gaza, no to Lebanon, my life for Iran.”

The political establishment, which had controlled the Quds Day demonstrations for the past three decades, was clearly shocked by the fact that the opposition had managed to completely take over the streets. At the time, the establishment tried very hard to accuse the supporters of the Green Movement, and their leaders, of being indifferent toward the Palestinian issue or even being pro-Israeli.

However, supporters of the Green Movement and civil society in Iran did not react to the recent Israeli attacks on Gaza with indifference. Instead, this year, they were in the front line of support for Gaza citizens. But most importantly, they made a concerted effort to separate their conservative protests from protests that favor the radical and ideological policies of the conservative faction in Iran.

Iranian users of social networks such as Facebook posted thousands of pictures with hashtags in support of Palestinians on a daily basis. Many showed their support for Gaza by publishing pictures of murdered children, women and civilian men along with a poem or a sad sentence. In addition, there have also been a few demonstrations organized by the civil rights activists in front of the United Nations office in the relatively posh Pasdaran Street in Tehran.

On July 24, members of the group known as Iranian Mothers for Peace gathered alongside other civil rights activists and held up signs that read, “End the massacre in Gaza” and “We want peace in the Middle East.” Parvin Fahimi, mother of Sohrab Arabi, the 19-year-old youth who was killed by the security forces during the post-election protests in 2009, was among those attending. Interestingly, Khabar Network website (IRINN), which is connected to Islamic Republic of Iran Broadcasting (IRIB), only used the word “mothers” to describe the group gathered to demonstrate against the war.

Famous Iranian filmmaker Jaffar Panahi, who was arrested and sentenced to a 20-year ban on any cinema-related activities following the 2009 protests, also took part in this demonstration. Well-known Reformist journalist Isa Saharkhiz also took part in this gathering. When asked by Al-Monitor why the civil rights activists who had previously criticized the Iranian government’s financial and military support of Hamas, are now supporting the Palestinians themselves, he answered, “[What took place during Quds Day five years ago] was a reaction to the radical policies of Ahmadinejad’s administration and was motivated by the idea that charity begins at home.”

One week before the demonstration by Iranian Mothers for Peace, another group of civil rights activists and supporters of the Green Movement held a similar gathering in front of the UN office. Shiva Nazar Ahari, who had previously been imprisoned for several years because of her support of the political prisoners, was among the organizers of this gathering. A young girl who took part in this gathering told Al-Monitor, “It is important for me to prove that the pro-democracy forces in Iran care about the Palestinians. We can support the people of Gaza without supporting our government’s policy of promoting violence and backing the radical Palestinian groups.”

So far, several statements in support of the people of Gaza have been published in Iran. One of these statements signed by numerous intellectuals and famous university professors, including Ziya Movahed, Morad Saghafi, Soosan Shariati and Yousef Abazari, reads as follows: “We say to the innocent people of Palestine that our hearts are with them; we stand with them. Their fallen comrades are not only our comrades, but comrades to all freedom-loving people in the world.”

In addition, 572 Iranian journalists, along with political and student activists, wrote an open letter to UN Secretary-General Ban Ki-moon saying, “As citizens of a Middle Eastern country, we consider peace and justice for Palestine to be one of the main prerequisites for a long lasting peace and security in this part of the world.”

At the same time, 160 Iranian artists, including Academy Award winner Asghar Farhadi and Dariush Mehrui, who is one of the founding fathers of the new Iranian cinema of the 1970s, wrote another letter to Ban Ki-moon saying, “You are an influential individual in an international organization. Therefore, we expect you to perform your historical role at this point in time.”

Hossein Naghashi, journalist and Reformist political activist, told Al-Monitor, “I believe that a large number of Iranians opposed the policies of the Zionist regime and considered them inhuman. However, the way that the government misuses and abuses the Palestinian issue for its own benefits has resulted in certain people and activists developing a kind of sensitivity toward this issue, choosing to stay indifferent toward it and from time to time even refusing to support the Palestinians.”

Naghashi believes that “these movements that are clearly connected to [Iran's] conservative movement are using issues such as the Palestinian issue, which have humanitarian and international aspects, as a way of scoring political points, or they try to make these issues into the monopoly of a particular religious-political group.”

At the same time, several Reformist newspapers including Shargh, Etemaad and Arman also published several images and articles related to this issue and criticized the massacre of the residents of Gaza by the Israeli army. Several conservative and radical publications in Iran reacted to this issue; for example, newspaper Kayhan criticized the support offered by the Reformists and followers of the Green Movement to the Palestinians and wrote: “Those who were chanting: 'No to Gaza, no to Lebanon,' ranging from Reformist publications inside the country to fugitive members of the sedition, are now criticizing Israel. It is of course an important achievement since those who believed in living their lives like sheep, and claimed that the issue of Palestine is 'none of our business,' are now criticizing the bloodthirsty Zionists in hope of making up for the dishonor they brought upon themselves five years ago.”

Ali Akbar Mahdi, professor of sociology at California State University, Northridge, told Al-Monitor, “Since the election of Mr. Rouhani, the atmosphere in Iran has changed. The political and civil rights activists feel that the right-wing faction is trying so hard to weaken Rouhani’s administration and they do not want to let the Palestinian issue become a tool for the rightists in their attempts to weaken Rouhani’s administration.”

He analyzed the reaction of Iranian civil society to the current crisis in Gaza and said, “It is important that people are mostly focusing on bringing an end to the bloodshed and paving the road for peace as opposed to chanting ideological slogans and condemning the other side.”

It appears that five years' experience in public demonstrations and the online activism that followed it have given Iranian civil society a notable power, allowing them to reinterpret Reformist concepts in dealing with international issues. Traditionally, the establishment in Iran only considered itself, and its supporters, worthy and capable of commenting on such issues. The reaction of the Iranian civil society regarding the recent events in Gaza is at the top of the list of these types of problems.