Lawmakers are considering new terrorism-related Iran sanctions targeting Hezbollah after ceding to the Obama administration's request to back off on the nuclear issue. 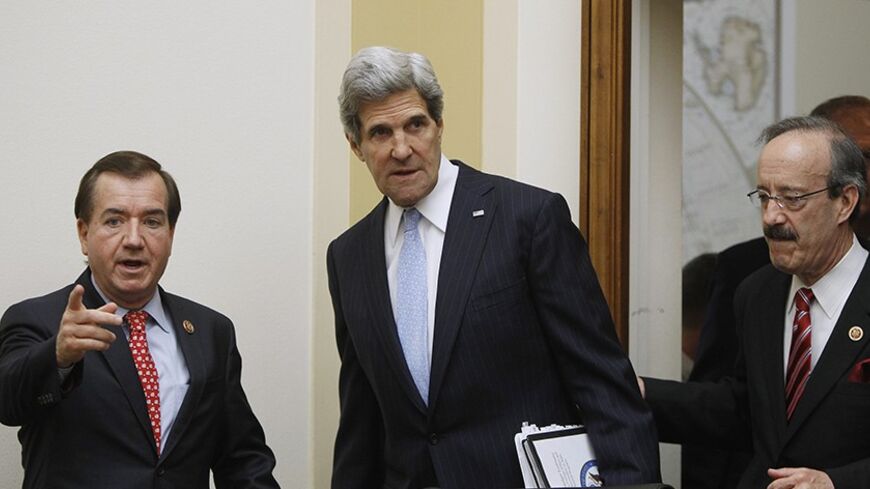 House lawmakers are working on new terrorism-related Iran sanctions after ceding to the Barack Obama administration's request to back off the nuclear issue, Al-Monitor has learned.

The House Foreign Affairs Committee is mulling ways to target Hezbollah and its Iranian patron in order to disrupt the group's support for Syria's President Bashar al-Assad. The push would allow lawmakers to demonstrate their independence from the White House on Iran while also addressing the Syrian crisis as the conflict enters its fourth year.

"I think it's important to make the point that it's not all hugs and kisses. Hezbollah could not exist without the support of Iran," Rep. Eliot Engel (D-NY), ranking Democrat on the Foreign Affairs Committee, told Al-Monitor.

"Hezbollah continues to be a terrorist organization; it has turned the tide of the civil war in Syria in favor of Assad," he said. "And to me, it's one of the ironies, I guess, of the fact that at a time when we're sitting and negotiating with Iran over their nuclear program, they continue to do mischief with terrorist groups like Hezbollah. It irks me."

Engel said he was working on the legislation with Foreign Affairs Committee Chairman Ed Royce (R-Calif.) and others on the committee. The bill remains a work in progress, but sources cited the Comprehensive Iran Sanctions, Accountability and Divestment Act of 2010 as a model. That legislation, sponsored by former House Foreign Affairs Chairman Howard Berman (D-Calif.) and former Senate Banking Committee Chairman Chris Dodd (D-Conn.), targets individuals and companies involved in Iran's energy sector.

Potential targets could include the Lebanese and European banking sectors, sources said, but bill writers are still doing their due diligence to determine whether the legislation would hurt US allies or otherwise undermine other US priorities. Europe designated the military wing of Hezbollah as a terrorist organization last summer under intense pressure from the US government, but not its political or charitable arms.

One key question is figuring out which new legal authorities the administration actually needs. Hezbollah and its operatives are already heavily sanctioned under Executive Order 13224 of 2001, which targets terrorism financing — the State Department designated the Shiite Islamist militia a terrorist group in 1997 — as well as EO 13582 of 2011, which targets assistance to Assad's forces in Syria.

Levitt, who is now the director of the Stein Program on Counterterrorism and Intelligence at the pro-Israel Washington Institute for Near East Policy, said the goal is to cut off Iranian funding for Hezbollah.

"The type of activities Hezbollah's engaged in cost a lot of money," he said. "I imagine it would not only target Hezbollah funding specifically, but the channels though which they get funding, [including] from Iran. So if they were able to figure out how Iran sends the money to Hezbollah, maybe that's something they could look at, too."

The House hinted at further action to come when it sent President Obama a bipartisan letter signed by 394 members of Congress earlier this month. The letter spells out lawmakers' expectations for a final nuclear deal while making it clear that they have major concerns about Iran's behavior in other realms as well.

"Although the P5+1 process is focused on Iran's nuclear program, we remain deeply concerned by Iran's state sponsorship of terrorism, its horrendous human rights record, its efforts to destabilize its neighbors, its pursuit of intercontinental ballistic missiles and its threats against our ally, Israel, as well as the fates of American citizens detained by Iran," the letter states. "We want to work with you to address these concerns as part of a broader strategy of dealing with Iran."

The effort to target Hezbollah has been in the works for several months, sources said, but has recently heated up after Democrats acceded to the Obama administration's request that Congress butt out of the multiparty nuclear negotiations with Iran. Senate Majority Leader Harry Reid (D-Nev.) has blocked a vote on a bipartisan Iran sanctions bill that has garnered 59 cosponsors, and the House has also lifted the pressure since passing its own sanctions bill on a 400-20 vote last summer.

"I believe in separation of powers, and I have to do what I believe is right," Engel said. "I support the administration; I hope they're successful. But I have my own views about things."

The sanctions pause has infuriated some in the pro-Israel community and created an opening for Republicans to attack.

Sen. Mark Kirk (R-Ill.), the co-author of the stalled Senate sanctions bill with Sen. Robert Menendez (D-NJ), has made Iranian support for Hezbollah a cornerstone of his campaign to force a vote on the legislation. He held up a placard at an FY2015 budget hearing with Secretary of State John Kerry earlier this month alleging that the $5.5 billion in sanctions relief from last November's interim deal could pay for 50 years of Hezbollah terrorism.

"I would expect that we would see even more terrorism with this additional money available to the Islamic Republic of Iran," Kirk said.

"The fact is that Iran has huge economic problems," he replied. "And I'm guaranteeing you that whatever additional flow of money there was going to them is not all flowing … to Hezbollah, because they have enormous challenges at home and demand on that money. There is no way Iran is better off when we are taking somewhere between $15 billion and $30 billion and putting it into a frozen asset fund."

Kirk ended the tense exchange by vowing to send Kerry the list of American service members killed in the 1983 Beirut barracks bombing.

"I'm glad we have designated Hezbollah a terrorist designation," Kerry answered. "If I had my druthers, I'd like to see them disappear."

Still, it's not clear how the administration will respond to the new legislation, which it hasn't seen yet.

"The administration can't say to Congress that we're going to blow up the nuclear negotiations by passing further authorizations for Hezbollah sanctions," said a House aide.

He said the administration could have a "whole lot more tolerance for it because it's not related to the nuclear program at all. But you can imagine there would be some who would probably not want to see it right now if it has anything to do with Iran at all."

Engel expressed his desire to move forward regardless.

"I think we need to not lose sight of the fact of what the equation still is in the Middle East, and not rush into euphoria about [how] we're going to have a wonderful agreement on Iran's nuclear energy program with this wonderful new moderate Iranian regime," he said.

"As I've always said, I hope these negotiations work — I hope they go well — that in six months we have a nice agreement. I have my doubts, but I hope I'm proven wrong. But I still don't trust the Iranians acting in good faith. If they were acting in good faith, they wouldn't be enriching while we're having negotiations and they wouldn't be siccing their terrorist organization Hezbollah on the rest of the world."