In a telephone interview with Al-Monitor, Masoumeh Ebtekar, the head of Iran's Environmental Protection Organization, said that many of the plans to address Tehran's pollution were not implemented under the previous administration. 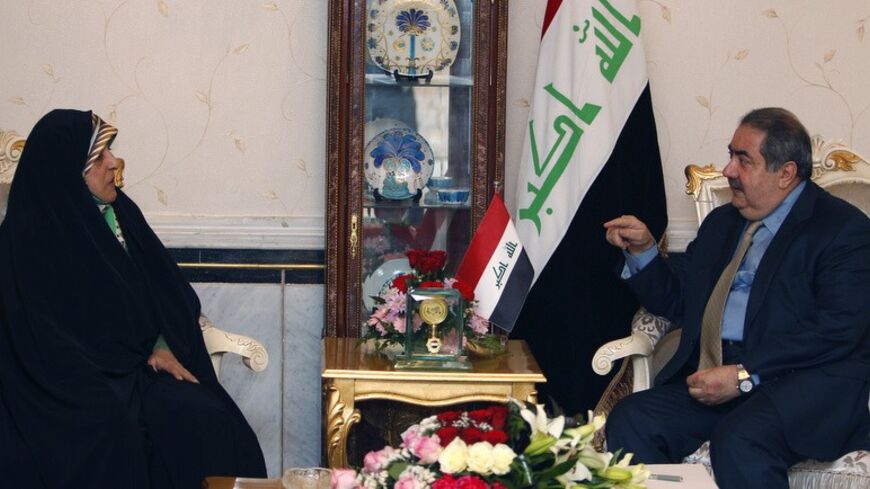 Tehran, the overpopulated and heavily polluted capital city of Iran, is in constant struggle with environmental issues. Among the most drastic and dangerous issues is the city's ever-present pollution, which worsens in winter, causing schools and offices to close on some days, and prompting officials to caution residents — in particular children, the elderly and sick — to refrain from leaving their homes.

President Hassan Rouhani has invested his hopes in Masoumeh Ebtekar to resolve these issues. Ebtekar, 53, was the first woman to become a Cabinet member and a vice president after the 1979 Islamic Revolution. Ebtekar, who spent part of her childhood in the United States and attended an American school in Tehran afterward, became a well-known face during the hostage crisis. Due to her fluency in English, she was the spokeswoman and translator for the hostage-takers.

Ebtekar is a scientist and previously served as editor-in-chief of Keyhan newspaper's English edition from 1981 to 1983. She has written books, articles and scientific papers on her domain of expertise — the environment — and she has also co-written an English-language book, titled Takeover in Tehran: The Inside Story of the 1979 US Embassy Capture, on the hostage crisis.

Under former President Mohammad Khatami, Ebtekar was a Cabinet member and head of the governmental Environmental Protection Organization for eight years. In 2007, she became a Reformist council member for the Tehran City Council, where she served until 2013 while maintaining her position as a university professor.

Following the 2013 election of Rouhani — whose candidacy she supported — there were speculations about her being tapped for the minister of science position. But she again assumed office as a vice president, and returned to head the Environmental Protection Organization.

Ebtekar has received several international awards and has been recognized for her efforts in protecting the environment, though she was also widely criticized for a paper she wrote in 2008, on the grounds that she had copied the material from previously published papers. The journal pulled her paper and apologized, and Ebtekar herself admitted that she had "made a mistake."

On Jan. 15, she was asked to speak before Friday prayers in Tehran about the topic of clean air. Shortly after, it was announced that her speech was canceled, with no explanation as to why.

I spoke with Ebtekar about serious environmental and pollution challenges in Iran, and most of all, its capital. The interview was conducted over the phone in Farsi, and the following is an English translation.

Al-Monitor:  What is the first step in addressing pollution issues in Iran?

Ebtekar:  Tracking the root of pollution in Iran creates an in-depth understanding of it. Our society is a transitioning one — one that has, in fact, transformed at great speed from a traditional society dependent on agriculture to an industrialized, oil-dependent urban one. Such a transition requires enough resources to educate people and create the type of culture required for practical urban life, which has not been provided to our citizens, at least not as much as it should have been. Citizens' cooperation is vital in reducing the extent of pollution.

Al-Monitor:  Why, in your opinion, is there insufficient cooperation from Iranian citizens in this regard?

Ebtekar:  To cooperate, people need to trust their government. They also need to know the details of decisions and priorities. Another important element is the active presence and effective role of nongovernmental organizations, which is what we in the current administration value greatly. President Rouhani's focus on ecological issues and related shortcomings is significant; for which I am grateful.

Al-Monitor:  You have made 12 trips to different provinces in Iran since you assumed office in the Rouhani administration. In what way do you believe them to have been mostly fruitful?

Ebtekar:  One of the matters on which I have focused during these trips and will continue to focus on, is engaging with grassroots organizations and our need to rely on their help. People have generally become more hopeful and expect further engagement and transparency regarding data and planning, which we will provide with the hope of facilitating this cooperation and creating a fruitful mutual relationship in working on environmental issues.

Al-Monitor:  Do you have faith in succeeding at improving the pollution in Iran's bigger cities, most significantly in Tehran?

Ebtekar:  The problem of pollution would have been resolvable with proper planning. I had overseen the planning a decade ago, and it was to be carried out over a time period of 10 years, which, for whatever reason, did not happen under the previous administration. Targeted subsidies and planning projects aimed at further improving the polluted air situation of busy cities will hopefully help. We must have faith, and we need to trust collective thinking and cooperation.

Al-Monitor:  Are there any cities that have experienced similar problems to Tehran and have succeeded in solving them? Could you benefit from their ideas and experiences in this regard?

Ebtekar:  Tehran's nature is one of the most beautiful in the world, particularly thanks to the Alborz Mountains, which are, at the moment, snow-capped and even prettier than usual. These same mountains, however, act similarly to a bowl surrounding Tehran and obstruct sufficient air flow, thus adding to the amount of pollution.

Mexico City had similar problems in the past. It is also a similar city to Tehran from the viewpoint of urban patterns and structural aspects. They have managed to solve a major part of their issues, and we were making efforts to learn from both their strong and their weak points. All of these efforts were disrupted eight years ago. We need to restart the planning process and act according to the increased number of people living in Tehran.

Al-Monitor:  You have criticized Iran's petrochemical sector, saying that international standards are not met in refining petroleum products, resulting in nonstandard gasoline in cars, which contribute in a major way to the pollution in busy cities. What is the latest on this?

Ebtekar:  We have no problem in communicating effectively with the current Ministry of Petroleum. [Oil Minister Bijan] Zanganeh is a very committed, precise and knowledgeable person, and we are working closely with his ministry to make up for lost time and the work on which we have fallen behind.

Our deputies have regular meetings considering such matters. A major problem we have with standardized, or lack thereof, fuel, is rooted in vehicles and their consumption structure. Both imported and domestic cars have some serious shortcomings, of which the auto industry and importers have been warned. Some have requested an extension to correct the failures, but regardless of the amount of time they need to correct these engineering, manufacturing or design issues, we are geared up to take serious action to implement the Euro 4 standards starting this spring.

Al-Monitor:  What is your take on the proposal to resolve Tehran's issues by moving the country's capital to another city?

Ebtekar:  There are mixed ideas and feelings about this. There is the potential to create some other problems, even if such a proposal goes through. It's difficult to predict the extent of benefits such a move would have.

There is, however, no doubt about Tehran's serious overpopulation, being a city that reached its ecological resource limitations in 1996, and a city where water needs to be imported from other parts of the country, due to its drastic water shortage.

Al-Monitor:  Is biking an option for Tehran residents? Do you consider it practical enough to be encouraged?

Ebtekar:  There is one district of Tehran — the 8th District — that has bicycle lanes and safety measures for those who wish to rent a bike from the station, pay the rental fee with a credit card and leave the bike in the bike station at a metro stop.

There are some other areas of Tehran in which we are working on providing the necessary amenities and implementing safety measures for cycling — riding conventional or electric bicycles, or electric motorcycles — to become feasible. There are obstacles, though. One is that Tehran, as it is mostly inclined and not flat, could not be considered a cycling-friendly city, generally speaking. The other is Tehran's high pollution levels, which make the city's air dangerous to breathe on some days. On such days, being outdoors, and especially exercising, may lead to health hazards, so we strongly discourage such activities.