Climate change, drought and decades of mismanagement have led to serious water shortages in Iran, leading to protests in a number of cities. 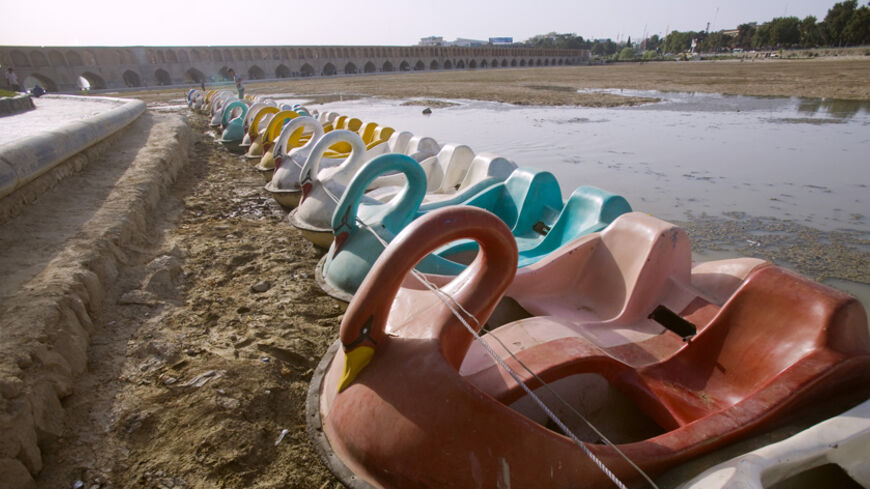 A correspondent in Tehran
September 10, 2014

The water crisis in Iran, where several important rivers and lakes have dried up, has become so serious that in certain areas of the country, citizens have been demonstrating and protesting to express their concern.

From the early hours of the morning on Aug. 30, thousands of residents of Esfahan and the smaller cities and villages nearby demonstrated near Zayanderood River, holding placards, protesting the drying up of Zayanderood and officials not paying proper attention to this issue.

Zayanderood is the biggest river of the central Iranian plateau and is 200 kilometers (124 miles) in length. It starts in the Zagros Mountains, particularly the Zard Kuh Bakhtiari Mountain, crosses the central Iran desert toward the east and, after passing the city of Esfahan, eventually ends in the Gavekhuni swamp. After 14 consecutive years of drought, climate change and mismanagement, parts of the river in areas near Esfahan have turned into dry riverbed.

Mohammad Reza, an environmental activist who took part in this demonstration, said, “The number of residents who had turned up for the demonstration was astonishing. It is beautiful to see that people care this much about the future of our water resources and environment, and it is tragic that the officials refuse to seriously look for a solution to this crisis.”

According to Reza, the demonstration was peaceful. People were chanting, “We only want water” and “Where is my river Zayanderood?” This last slogan, however, shows that the demonstrators have yet to forget the protests following the 2009 presidential elections. In those demonstrations, people protested the contested election by chanting: “Where is my vote?”

The water crisis of Zayanderood will have terrible consequences, including the destruction of the river’s ecosystem, loss of different life forms and destruction of wells and streams. It will also destroy agriculture around the river and will deeply affect the industrial sector as well.

It appears, however, that the water crisis is not unique to Azerbaijan or Esfahan. Back in May, Iranian President Hassan Rouhani’s minister of energy, Hamidreza Chitchian, issued a serious warning on the future of water in Iran: “In the past 10 years, we witnessed the average rainfall in the country drop from 250 millimeters (9.8 inches) to 242 millimeters (9.5 inches), and we are facing serious problems regarding our water and water sources.”

On Aug. 19, the CEO of Iran Water Resources Management Company, Mohammad Hajrasooliha, cited a 52% drop in surface runoff — the water from precipitation and other sources that moves across the earth's surface — and had said that at the end of the fourth month of the year, after a drop of about 10% compared to the previous year, the amount of surface runoff in the country had fallen to 39.267 billion cubic meters. He said, “Last year, the number was 42.442 billion cubic meters.”

It is notable that only four months prior to this, in April, Hajrasooliha had presented a different set of numbers and had said: “The amount of surface water in the country had been estimated to be about 90 billion cubic meters, but the real amount is only 55-60 billion cubic meters.”

An environmental expert who lives in Tehran told Al-Monitor, “People are alarmed. The numbers are different, but according to the Ministry of Energy the amount of renewable water has dropped drastically, almost by 50%, in the post-revolution decades.”

In 1979, the amount of water allocated for each individual was 4,000-4,500 cubic meters. Right now, the number is less than 1,500 cubic meters, more or less. We are witnessing a serious drop. The population has grown and the underground water sources are shrinking due to illegal and irregular exploitation, and currently we don’t have anything to replace these water sources.

Chitchian has also said that underground water sources are shrinking. At the end of a session in parliament, Chitchian told members of parliament, “Unfortunately, there are a lot of illegal wells and even those with the proper license have been exploited beyond their sustainable level. This has resulted in a drop of about 100 billion cubic meters in the static underground water supplies. The number has reached 11 billion [cubic meters] in the past year.”

Chitchian said, “The presidents who took office in the post Iran-Iraq war era, Hashemi Rafsanjani, [Mohammad] Khatami and [Mahmoud] Ahmadinejad, were all interested in structural management and thus destroyed the crucial water sources and the underground water supplies and none of them are taking any responsibility for their actions.”

On Aug. 24, Masoumeh Ebtekar, the head of the Iranian Department of Environment, warned that environmental problems in Tehran have reached a critical level. She said Tehran had reached its ecological limit in 1996 and any industrial expansion in Tehran should have been stopped after 1996.

According to Ebtekar, natural resources in Tehran are being exploited seven times more than their normal capacity. Given that in Tehran the amount of drinking water is limited, experts have issued serious warnings in the past few months regarding the level of nitrate in the drinking water in Tehran.

State-owned media, including IRIB, repeatedly ask citizens to use water economically. This is while Parviz Fattah, who served as the minister of energy during Ahmadinejad’s first term as president, had said that agricultural use accounts for 92% of Iran water usage, and that “on average, only 70% of water should be used for agriculture and therefore the numbers show that Iran has 22% more water usage than the international average.”

Although government officials constantly warn about water crisis and drought, they are yet to introduce a serious solution or management method that would help solve the water crisis. However, on Sept. 6, Ebtekar said that Rouhani’s administration was trying to help farmers reform their irrigation methods.

A senior professor of sociology at Tehran University told Al-Monitor, “All these years we were discussing economy, politics, society and democracy. Now, however, these discussions all sound absurd to me. Given the current situation, we will either die of thirst or run away. I am no longer sure there was any point in all those discussions.” 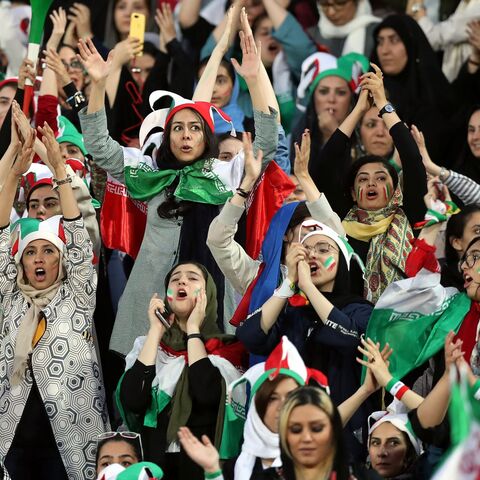