Egypt's decision this week to ban Hamas activities has caught the Palestinian Islamist movement off guard, with concerns it's heading on a collision course with Cairo. 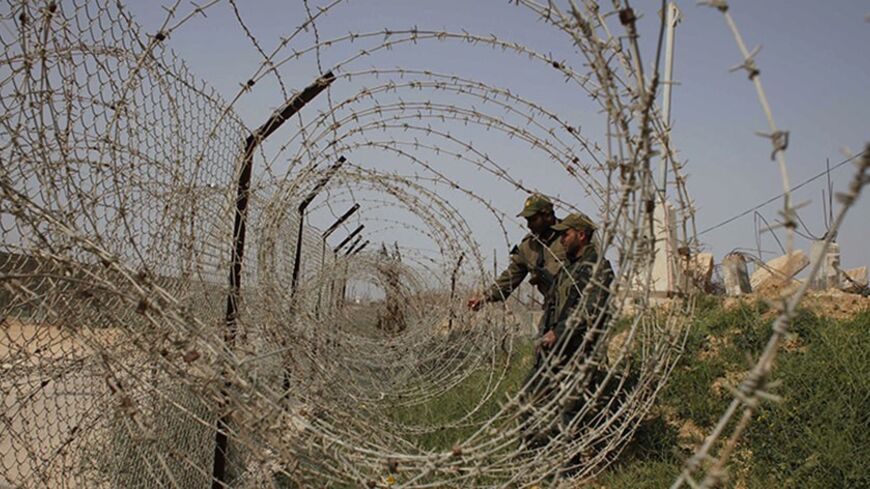 Members of Palestinian security forces loyal to Hamas patrol at the border between Egypt and the Gaza Strip, March 4, 2014. - REUTERS/Ibraheem Abu Mustafa

The Gaza Strip is living through a state of tension after a Cairo court ruled on March 3 to ban all Hamas activities in Egypt, freeze their funds and close their headquarters. This came in response to a lawsuit accusing Hamas of storming Egypt’s border in 2008, and of being involved in the storming of Egyptian prisons during the January 2011 revolution.

The decision worsened the already tense relationship between Egypt and Hamas.

But Egypt’s latest decision surprised Hamas, which did not expect relations to approach a complete break. As soon as the court decision was made, a media campaign by Hamas-affiliated Aqsa TV rejected the decision and considered it a stab in the back of the Palestinian resistance and a free service to Israel.

Hamas’ press office issued a statement strongly objecting to the court decision and asked who it called “the free people of Egypt and the world” to condemn that decision, because it is unjustified and based on false information. Hamas said that it was reprehensible that such a decision be issued by an Arab Egyptian court, and that it was surprised at the language used. The statement stressed that Hamas has no activities in Egypt and no headquarters there, neither before nor after the revolution, and the court decision was political par excellence and harms the reputation of the Egyptian judiciary.

Al-Monitor contacted several Hamas leaders at home and abroad to learn the implications of the Egyptian decision. Izzat al-Rishq, a member of the Hamas political bureau and Hamas’ media official, said that the movement has no headquarters or property in Egypt, with the exception of a rented building in Cairo occupied by Mousa Abu Marzouk, the deputy of Hamas leader Khaled Meshaal.

In a telephone conversation with Al-Monitor from Doha, Rishq said that Hamas’ relationship with Egypt in different eras — in the eras of former President Hosni Mubarak, the military council and ousted President Mohammed Morsi — took place through official channels. He refused to answer Al-Monitor’s question about whether Abu Marzouk will stay in Egypt after the court decision.

Yahya Moussa, a Hamas leader and chairman of the legislative council's oversight committee, told Al-Monitor that the court decision was political and harmed Egypt’s top post. He downplayed the decision’s effect on the ground, “because the Egyptian regime has been fighting Hamas and suffocating the Palestinians for eight years. There is no trade between us, no free movement of people and we have no institutions in Egypt; therefore, the decision was not directed only against Hamas but also against the Palestinian people and the Palestinian national movement.”

Mahmoud al-Zahar, a senior leader of Hamas in the Gaza Strip, raised the ceiling by saying that the decision lacked justice as it happened in the absence of the movement’s lawyers and because it was not supported by documents or evidence. He said that the decision “serves the Zionist project.”

Despite the volleys of condemnation from Hamas, the movement seems worried about the consequences of the decision, both regarding the closure of the Rafah crossing and the demolition of the rest of the smuggling tunnels, and even the possibility of entering into a confrontation with Egypt.

Maher Abu Sabha, the director of the Rafah crossing, said that the Rafah crossing had been closed by Egypt since Feb. 10. He noted that, despite his daily contacts with the Egyptians regarding reopening the crossing, he has not received any promises in this regard, despite the fact that 5,000 Palestinian patients, students and Egyptian residency holders wanted to travel.

The national committee to break the siege on the Gaza Strip has set up a protest tent at Rafah calling for the reopening of the crossing. Al-Monitor visited the tent and witnessed firsthand how hundreds of Palestinians are affected by the travel ban.

In an interview with Al-Monitor, an official source at the crossing said that Egypt’s decision means that thousands more Palestinians will be banned from traveling by keeping the crossing closed until further notice and that the suffering will increase day after day.

Local media reports are anticipating the remaining tunnels on the Gaza-Egypt border to be destroyed following the court’s ruling. So far, 1,350 tunnels, or 80% of the total, have been destroyed. Such a move will worsen Gaza’s economic problems as the Gaza Strip is mainly dependent on the tunnels, and is, according to reports, losing $230 million a month.

The Palestinians in the Gaza Strip are wondering if the Egyptian court decision is an introduction to a subsequent confrontation between Egypt and Hamas. The question has been posed for months within Hamas after Morsi’s overthrow and after the Muslim Brotherhood was declared a “terrorist” group.

A senior Hamas official told Al-Monitor that such a confrontation is unlikely, “at least from the standpoint of Hamas, because [Hamas] will not move its military compass and political direction away from Israel, which was very happy with the decision to ban Hamas in Egypt. Israel is pushing for a military confrontation between the Palestinians and the Egyptians. Although the decision raises tensions between the two sides, Hamas will maintain the 'purity of [its] weapons,' which requires [Hamas] to confront no party other than Israel.”

Regarding the decision’s expected consequences, the Hamas government said in a statement obtained by Al-Monitor that Egypt has abandoned its historic role regarding issues that concern the Palestinian people.

A senior Hamas official agreed, telling Al-Monitor that the decision might restrict Egypt’s influence in the Palestinian arena, particularly over reconciliation between Hamas and Fatah. The official rhetorically asked, “How can Egypt lead the process of Palestinian reconciliation or truce talks with Israel when it regards Hamas as a banned terrorist movement?”