Turkish President Abdullah Gul supports an open and transparent investigation into allegations of corruption, saying, “There must be no suspicions left with regard to corruption.” 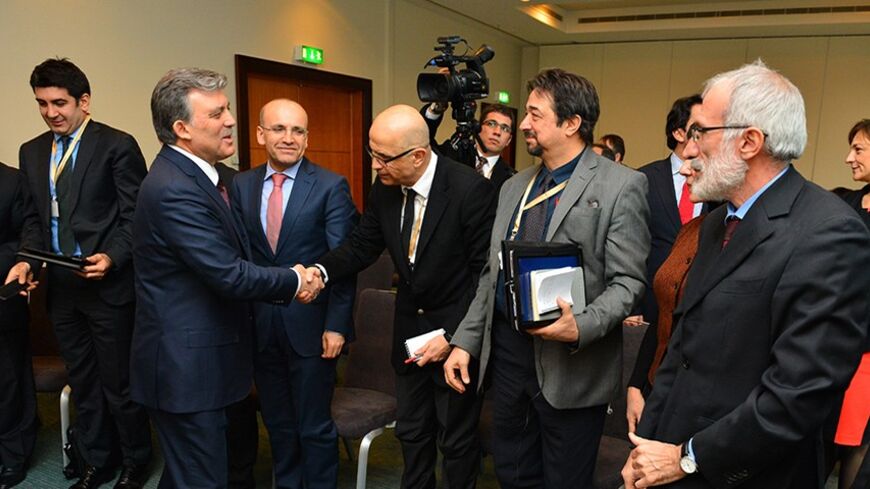 COPENHAGEN, Denmark — I was invited this week with a select group of journalists, including the editors in chief of major Turkish dailies, to accompany President Abdullah Gul on his official visit to Denmark. The occasion provided us with a firsthand opportunity to see just how disturbed President Abdullah Gul is over political developments in Turkey.

One also got the distinct impression, from his repeated emphasis of the need for Turkey to return to the EU path, and to institute European standard legal reforms, that he regrets having been forced by circumstance to sign antidemocratic legislation introduced recently by the government.

During our exclusive discussion with him, Gul also rejected repeated claims by Prime Minister Recep Tayyip Erdogan, and members of the ruling Justice and Development Party (AKP) — of which he is a founding member — that they are faced with a foreign-led conspiracy to undermine them. Gul remarked that such claims put Turkey in the league of third world countries.

Asked about the highly acrimonious current political environment in Turkey, Gul said he was greatly disturbed and saddened over this situation, which clearly no one can be pleased about. He said the images coming out of Turkey these days, with massive rival funerals, was reminiscent of the “old Turkey.”

Gul was referring to the period before the 1980 military coup when every day was marked by funerals of right-wing and left-wing activists, extremists, politicians and academics killed by rival factions. Gul said that thankfully the parents of the young people killed were acting responsibly and preventing the situation from turning into factional violence and getting out of hand.

Going on to point out that Turkey’s political traditions were not good, based as they were on divisiveness, polarization and confrontation, he added that this situation has to change if the country is to attain its desired level of development. “Whatever the results are, Turkey has to speedily return to its reform process after the elections and continue with strong reforms from where it left off,” he said referring to the March 30 elections.

Gul underscored how the European Union still represents the most important anchor for Turkey, and indicated that even if there are those in Europe who are reluctant about Ankara’s membership bid, Turkey could still achieve and implement the reforms needed for EU membership on its own.

“If we can manage to do that, then many of the topics relating to legal standards, judicial standards, transparency and accountability will be solved automatically,” Gul said, adding that Turkey’s problems today stem from shortcomings in its rules and legal regulations.

“If the rules were clear like they are in Germany or Denmark, then we would not have many of the complaints we have today,” Gul added. He said that if the current situation continues, then Turkey will regress.

After it was pointed out to him that Turkey had already regressed by retreating from EU legislative standards in some laws introduced recently by the government, Gul said, “Turkey has to reignite itself and move away from such regression.” He added, with a tone of discernible regret, that Turkey had lost its international luster of three or four years ago.

Asked if he believes in the existence of a “parallel state” in Turkey — the term Erdogan uses when referring to the Gulen movement, a rival Islamist group he is currently engaged with in a bitter war of attrition — Gul was noticeably cautious.

“We see that there are different types of solidarity groups within the state. Anyone, regardless of their religion or ideology, can rise to any level within the state. But if they are working for the state, their only reference point must be the constitution, the laws and the rules of the hierarchical structure they operate in. No one can allow any form of solidarity that goes beyond this.”

Asked once again if he believes there is a “parallel state” in Turkey, Gul said, “There has been. There are examples of this kind of solidarity; therefore, this cannot be allowed.” He appeared determined, however, not to use the term “parallel state.”

“Everything has to be discussed within the framework of laws. The response to a crime is punishment. If there are those in the state who operate on the basis of different reference points, then the legal process will of course come into play. Otherwise people can have differing opinions, and if they do not commit any crime, then there is nothing to be said by anyone,” Gul said.

Gul was also asked — with reference to corruption allegations hanging over Erdogan and his government’s head — about the public perception that corruption is unpreventable in Turkey. “There must be no suspicions left with regard to corruption. Whatever the investigation that has to be done with regard to this must be done in an open and transparent manner. The legal process must be made to work,” Gul said.

One of Gul’s most striking answers, however, came in response to a question about the claim repeatedly brought up by Erdogan alleging an international conspiracy by “external forces” that are trying to topple him and his government.

“I don’t accept this claim and don’t find it right. Of course Turkey has its chronic opponents. Also, if you leave your wound open, flies will settle on it. What is important is not to get wounded,” Gul said.

He went on to question why states and international media organs that had been praising Turkey for the past decade should all of a sudden be accused of being wicked “external forces” out to destroy Turkey.

“Such allegations are more becoming of third world countries. Turkey has freed itself from that,” Gul said, adding, “Therefore, I do not believe in conspiracy theories that say there are those who are out to destroy Turkey.”

These remarks are bound to go down badly with Erdogan and his ministers. They continue to claim the opposite, and have made this allegation the centerpiece of their vitriolic campaign aimed — according to the opposition — at diverting attention away from the real reasons behind last summer’s Gezi protests, and the corruption scandal that broke on Dec. 17 implicating the government.

Gul was also asked about who killed Berkin Elvan, the 15-year-old boy who died recently after months in a coma after being hit in the head with a gas pellet fired from a police barrel during the Gezi Park protests; Elvan's funeral was attended by tens of thousands of people last week.

Referring to Elvan and two other young victims — one a pro-government protester, and the other a policeman who died as a result of a heart attack during recent antigovernment protests — Gul said he felt pain for all three young people.

“There is the need to immediately find those who are responsible for such deaths to prevent similar occurrences in the future. That is what a state based on the rule of law does. You have to have deterrence to prevent a repeat of such incidences,” Gul said.

Gul’s remarks can also be taken as an indirect criticism of Erdogan — who has accused Elvan of being a terrorist — and his government, which is widely accused of not having lifted a finger to bring Elvan’s killer to justice.

The bottom line is that Erdogan is unlikely to be pleased, and most likely to be angered — given his temper and highly volatile nature — by Gul’s remarks to us in Copenhagen. Erdogan, however, is unlikely to respond to Gul directly.

As to why Gul felt the need to come out like this at this point in time with such forward remarks, one might conjecture that he is unhappy over the position he has been placed in by Erdogan, after being forced into signing legislation that is being criticized at home and in Europe as “antidemocratic,” at the expense of his own credibility, and is therefore trying to recover lost ground.

Other than that, some of the things Erdogan has been saying and doing must also have started to grate on Gul’s conscience.