An Iraqi-Syrian civil society delegation has met with decision-making bodies in the European Union, with the latter promising assistance in efforts to confront sectarianism in these two countries. 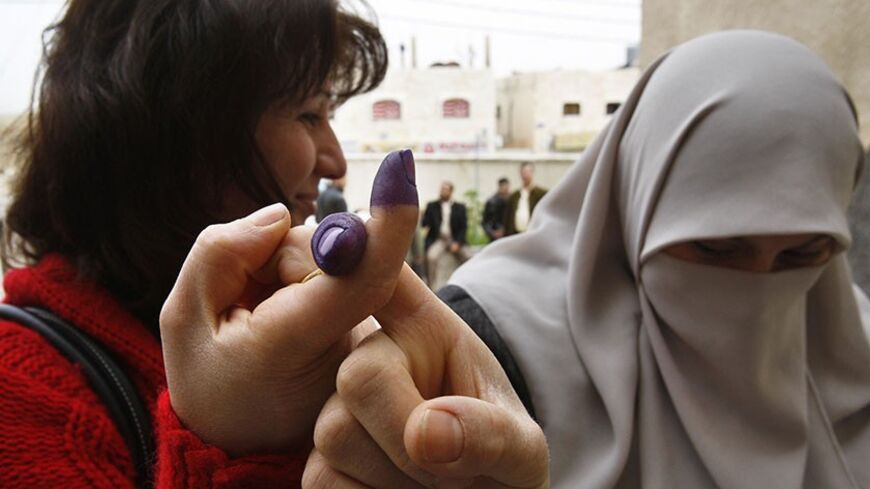 Muslim and Christian Iraqi women living in Jordan hold up their ink-stained index fingers after casting their ballots in Amman, March 5, 2010.

The international community has tried various approaches to confront ethnic conflict in the Middle East. International bodies have usually contented themselves with just issuing statements when a human rights violation occurs, and sometimes have supported specific political parties against others. They have focused on vulnerable groups such as minorities, while their positions often neglect members of the majority, who face violations of their rights as well.

For the most part, the international community’s approaches were of no effect or had little success in improving the humanitarian situation of the people of the Middle East.

But this time, the European Union has listened to representatives of Iraqi and Syrian civil society to support them in their confrontation with sectarianism, which is widespread in these two countries. This occurred as part of a campaign titled "We Are All Citizens," promoted by the Iraqi and Syrian delegation to the EU in a tour that included Brussels, Geneva and Rome. The delegation met with decision-making institutions interested in promoting dialogue and confronting the sectarian conflict in the region.

The delegation included civil activists and religious leaders from civil society institutions in Iraq and Syria, most notably the Iraqi Council for Interfaith Dialogue and the Masarat Foundation, which specializes in minority affairs. The delegation comprised high-level religious figures from various Iraqi religious groups, including Termeda Alaa Aziz Tarish, the deputy head of Mandeans in Iraq and the world; and Father Amir Jaji, the adviser to the Pontifical Council for Islamic-Christian Dialogue. The Pax Foundation supported the delegation in reaching decision-makers in the EU. Al-Monitor has learned the details of the visit and meetings through separate reports issued by the aforementioned parties.

The delegation met with the Freedom of Religion and Belief Working Team in the EU parliament on Feb. 12. During the meeting, the working team presented its first annual report to the parliament on freedom of religion and belief in the world. The report focused on Iraq and Syria, as two of the 15 countries most affected by a loss of or threat to freedom of religion and belief. The report referenced the Partnership and Cooperation Agreement signed between the EU and Iraq, saying that “the EU must now make sure that the human rights provisions in this Agreement don’t become a dead letter.” During this meeting, UN Special Rapporteur on Freedom of Religion and Belief Heiner Bielefeldt conceded that the UN's role in Iraq — particularly with regard to confronting sectarianism and protecting human rights — was very small. Bielefeldt also praised the distinguished role of the Iraqi Council for Interfaith Dialogue.

On Feb. 13, the delegation met in Brussels with a number of decision-makers in the EU and representatives from European civil society institutions. The meeting concluded that the proper way to counter sectarianism in Iraq and Syria is to support the "citizenship project" as a basic foundation that brings together different groups of people. Furthermore, in doing so, they can achieve other goals, such as ensuring respect for human rights and protecting minorities.

Thirsa de Vries, the senior program officer for Iraq at the Pax Foundation, told Al-Monitor that the "We Are All Citizens" project aims to effect comprehensive and long-term change in the region by working at different levels: train and educate new generations on the values of citizenship, through educational curriculum reform and holding training sessions; involving religious leaders in interfaith dialogue institutions; and working to reform laws and make them more effective in facing sectarianism and supporting human rights. Accordingly, international bodies, including the EU, should play an effective and intensive role in the aforementioned areas.

De Vries added that the members participating in the Brussels meeting expressed their support for the citizenship project, after studying other alternative plans, including establishing a protected area for the region's minorities, for example in the Ninevah province of Iraq. Everyone agreed that the alternative plans could not offer a national solution that would succeed in the long run; rather, they would make the situation more complex than it already is. In this context, supporting the citizenship project is the best strategy the EU can adopt.

The World Council of Churches hosted the Iraqi delegation at its headquarters in Geneva on Feb. 15. Members of the delegation stressed the importance of including Islamic dialogue within the ecumenical dialogue, in the general context of Abrahamic religions, which are predominant in the region. Prior to this, the delegation visited the Pontifical Council for Interfaith Dialogue in Rome, and there was a proposal for future partnership to strengthen cooperation between the two sides.

Finally, the international community's efforts to address the issue of sectarianism in the region include some strengths that will likely make it a successful project, especially in the long run. This approach paves the way for internal solutions built on a solid foundation, to gradually establish a civilized civil society. Other international bodies should adopt this approach, to promote pluralism and human rights in the Middle East.