Turkish Prime Minister Recep Tayyip Erdogan retains his popular base, despite scandals, because most people believe they are still better off with the Justice and Development Party (AKP). 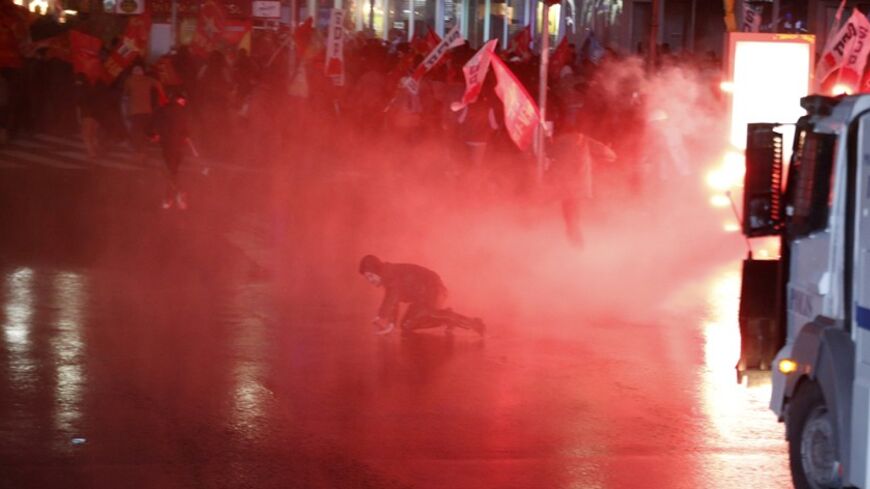 A fleeing protester falls after he was hit by a police water cannon during a rally against Turkey's Prime Minister Recep Tayyip Erdogan in Ankara, March 1, 2014. - REUTERS/Umit Bektas

Not a day passes by without another headline indicating the imminent “fall” of Turkish Prime Minister Recep Tayyip Erdogan. And not a day passes by without Erdogan and Justice and Development Party (AKP) officials answering every allegation by referring to the “the ballot box.” Erdogan has turned the upcoming municipal elections into a "vote of confidence” for himself. Daring to ask unpleasant questions to any AKP pundit immediately returns references to the “ballot box” and “national will.”

One fact purported is that Erdogan still has public support — verified by the crowds attending his rallies and election predictions. Why and how can the AKP still hold on to its core? Who still supports the AKP is a question I hear frequently from friends all around the world. The answer is simple, with a few intriguing twists.

Let’s first look at the numbers, as they are what matters the most in contemporary Turkey. The most prominent polling agencies concur that the AKP remains the top party in the upcoming municipal elections. Yet, they disagree significantly on what AKP’s vote share will be. The MetroPOLL Strategic and Social Research Center has found that after the Gezi Park protests in July and August 2013, Erdogan’s rallies indeed contributed to an increase in AKP’s popularity. However, since the corruption scandal of Dec. 17, 2013, the AKP has not been able to “increase” the number of its supporters, but rather relies on its core electorate of about 37% — the percentage of actual voters estimated by the polls. The most challenging is the interpretation of the "undecided" votes. When pollsters distribute these “undecided” votes according to the percentage of votes received, the AKP’s vote share ranges between 43-50% among the most respected Turkish polling agencies.

Hakan Bayrakci, the director of the SONAR Research Center, estimates the latest corruption scandal could cost the AKP a loss in votes of about 4%. Why is it so minuscule? Critics dismayed by these figures complain that “in any other democratic system such rumors would easily cause the government to collapse, and all it would take from the AKP is a mere 4%.” How can this be plausible?

Four sets of intertwined reasons may be at play. First, “the cohesiveness of the AKP elite.” A diverse group of men are still standing by the AKP, mainly because they have achieved their current positions not on the basis of merit but on the basis of their unwavering loyalty and unquestioning dedication to Erdogan and the AKP. Hence, if the AKP loses, many of them are destined to lose their standing. The power of this ruling elite is sizable (not just the top 5% as is often the case in other Western democracies), when you consider most “state employee” positions — from the lower level to mid-management — are seen as “rewards” to given to party loyalists. Universities are not immune to allegations of nepotism and cronyism of the administration either. So there is a good portion of the population that is composed not only of guaranteed “voters” but also of active AKP lobbyists working to ensure as many votes for the AKP as possible. The elections are seen as a “blank check” by AKP’s ruling elite, who fear not only a loss of cushy positions but also face retribution for their potential involvement in the corruption scandal and abuse of power. Hence, right before the elections take place, all those who were arrested following the Dec. 17 raids have been released, and Erdogan has said “justice is served.” The AKP takes cares of its own.

It is true that the AKP has lost the support of “pivotal elites” or influential Turkish intellectuals. In turn, most of these elites have lost their position and reputation in the Turkish media. A quick search on Al-Monitor’s Turkey Pulse gives a wealth of information — in articles published in the last six months — on the sad state of Turkish mainstream media under direct control of AKP elites. When was the last time Erdogan participated in a one-on-one debate with an opposition leader? All media outings are well-designed to minimize any mistakes. Erdogan and his men have successfully sidestepped the importance of intellectuals in Turkey and filled the gaps with mostly incompetent yet “unquestioning” AKP sympathizers.

This brings us to the second reason of “information deficiency.” The majority of the AKP’s core base — 80%, according to the SONAR Research Center — do not get their news from the Internet, which is diligently filtered by the government. Mainstream TV and newspapers did not report on the incriminating audio recordings released on Feb. 24 between Erdogan and his son. What they report is the endless stream of foreign and domestic enemies, scandalous lobbies that are jealous of the AKP, with a goal to terminate Erdogan and end the Turkish success. When the recordings were released on YouTube, AKP pundits immediately penned rather sensational opinion pieces reminding the public about how devout Erdogan and his family are, and how brave Bilal has been standing with the Palestinians in the Gaza Strip. Always a good move to deal the Palestinian card when the opposition questions whether Bilal’s companies are trading with Israel.

But why does the Turkish public not react to all this? The poignant answer to this question comes from Burhan Kuzu, an AKP parliamentarian and constitutional law professor, who tweeted: “Even if the Bilal-Erdogan tapes are real, no one would believe them.” Within AKP's core base, the corruption scandal is perceived as Erdogan collecting money from rich businessmen for the good of the ummah (Muslim community). Hence, Kuzu has a point, as the core of AKP supporters do not perceive Erdogan and his family as corrupt or as thieves.

In addition, what is now referred to as “fear of Erdogan” — a factor that strongly discourages anyone from speaking up against the government — has permeated to the roots of Turkish society. The leaks have verified that mainstream media takes its cues from the Turkish Radio and Television Corp. All opposition parties have suffered from AKP’s tireless attempts to silence their voices. The opposition — regardless of its ideological stand — deserves credit for its hard work. But their efforts do not translate into any success, their impact on legislation is minimal and almost all their questions go unanswered. Therefore, the AKP holds the “visibility advantage” with the opportunities of being in power.

“Incumbency advantage” is the third factor. Incumbency offers the AKP not only the political resources to control and silence the opposition but also financial resources to campaign at full speed. Incumbency also allows the AKP to carefully utilize carrot-and-stick policies. In the upcoming municipal elections, Turks face the underlying question, "Would you like your district to be at odds with the ruling party?" Not being in line with the ruling party puts a district at a disadvantage, while falling in line may bring significant benefits. In addition, the AKP’s endless effort to curb the enthusiasm of any potential political rival means all indicators — that is, opinion polls — favor the AKP, so mobilization for the opposition is not easy. AKP’s organizational ability to get its electorate out to vote is only strengthened by the incumbency factor. It is at best over-simplistic to claim that “uneducated poor masses vote for the AKP because they receive coal, rice and other goods in exchange for their votes.” They vote because they still feel they belong to the AKP and believe in Erdogan.

The last factor is the “electoral system." In the general elections, a party has to get 10% of the national votes to enter parliament. Given that there are about 25 parties participating in the elections — with only three able to pass the 10% threshold — what happens to the votes cast to the other parties? Simply put, it is a winner-takes-all system benefiting the “big” winners.

So with the large-scale corruption scandal, the AKP’s core constituency may no longer support the AKP, but withdrawal of support from the government does not automatically translate into support for the opposition.