Is Turkey ready for the post-Erdogan era?

Even if the Justice and Development Party (AKP) loses significant votes in the municipal elections, Erdogan will remain prime minister. 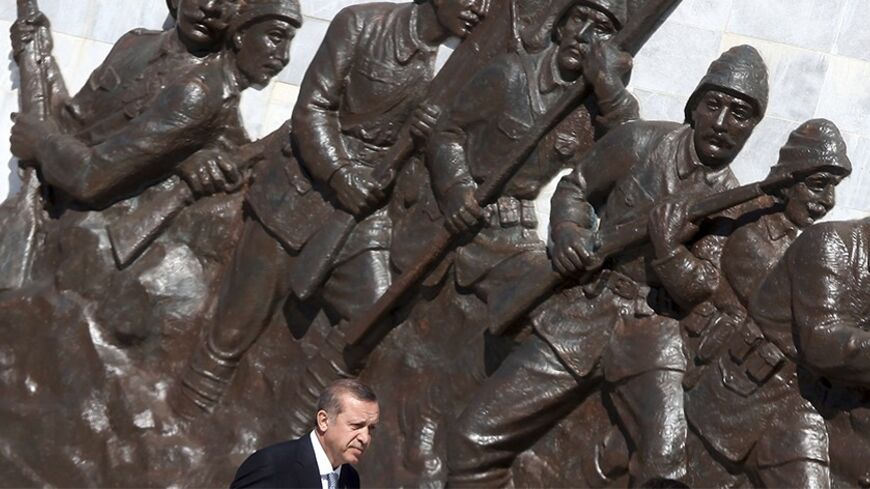 Elections are the most inclusive “opinion polls,” and they have immediate, real-life effects. With several days to go before the March 30 municipal elections in Turkey, I talked with a number of candidates, volunteers and campaign managers.

Most of the campaign workers belong to the opposition parties, but to my surprise, I observed that they are under the spell of Turkish Prime Minister Recep Tayyip Erdogan. The Turkish leader has been indoctrinating all of us to believe the ballot box is the panacea for everything wrong in the Turkish political system: Corruption, you say? Take us down through the ballot box. Civil liberties, you complain? Remove us from power through the ballot box.

Under Erdogan’s spell, most of the opposition seem to be harboring the same illusion: Elections will be the end of Erdogan. We will bury Erdogan in the dustbin of history through the ballot box. The emotion is at a climax among the opposition’s young and passionate campaigners.

When I uttered, “But Erdogan is not on the ballot,” the room went silent. Not a pleasant moment. I felt the same way when I asked a room of dedicated Justice and Development Party (AKP) volunteers debating the conspiracies of traitors, “When was Erdogan not under a coup threat?”

Sometimes, I ask “unpleasant” questions. I do not receive satisfactory answers. I see agitated hands, concerned faces, puffs on cigarettes and the intensified clicking of worry beads as signs of possible trouble ahead for Turkey. As tensions grow, I can't help but wonder if Erdogan’s rage is contagious?

Erdogan, a larger-than-life figure with an omnipotent media presence, is an icon one cannot escape in Turkish politics. Whether you approve or dare to disapprove of his policies, you cannot deny that Erdogan sets the agenda. He framed the upcoming elections as a “confidence vote” for himself and the AKP. This, however, is only true in part. The local elections will be a vote of confidence for Erdogan only if he wins.

A win will be determined by three interrelated factors. The first is the overall vote. Erdogan has publicly stated that he will quit politics if the AKP fails to come in first in the elections. He has refrained from setting a percentage cutoff. The second is whether the AKP retains control of the critical municipalities of Ankara and Istanbul. This will be telling of the party's popularity. The third is the new math, or “buyuksehir effect.” (Buyuksehir means “metropolitan city.”) In December 2012, a new law was passed adding 13 new “metropolitans” to the 16 existing ones. In March 2013, another city was added. The number of metropolitan city municipalities has thus doubled since the last local elections, in 2009. The AKP must have hoped this gerrymandering would help win mayoral seats, but with the Syria factor in the southeast, three cities currently under AKP mayors — Hatay, Mardin and Sanliurfa — may be lost.

Indeed, Hakan Bayrakci, head of the SONAR Research Center, announced that the center's March 2014 surveys suggest a nationwide 7 to 15 percentage points decrease in AKP votes. Bayrakci also said the AKP will most likely win Ankara and Istanbul, but only by slim margins.

So what are the post-election possibilities? First, assuming the best-case scenario for the AKP, its votes will increase or remain unchanged from the last elections, which would include retaining the mayor's office in Ankara and in Istanbul. Pundits across the board believe that Erdogan and his circle would view such a victory as a blank check to increase their grip on power. Just the legislation pushed through the AKP’s rigorous effort in the first two months of 2014 — an Internet law, judicial power consolidation law and an intelligence law awaiting implementation — signals that Erdogan has traded his dreams of the “all-powerful presidency” for the “all power in my hands” post of prime minister. It would take rare audacity for a prime minister to campaign on promises of additional censorship, lawsuits and curtailed freedoms.

Another possible outcome involves the SONAR polls being correct. If the AKP were to lose even 7% to 15% of the vote countrywide, would it represent a vote of no confidence in the AKP? What if one takes the scenario one step farther, to the AKP’s utter defeat in major municipalities, such as Ankara, along with a countrywide loss. What would Erdogan do? Almost all “optimistic” pundits told Al-Monitor they would expect early elections to be called. Would that mean that Erdogan wouldn't run for the presidency in summer 2014?

Other than "dissident" media outlets declaring Erdogan finished, even if his party only garners a rather low percentage of the vote in March, it is hard to imagine any scenario leading to a willing Erdogan exit. Watching Erdogan's well-coordinated rallies, and meetings with friendly media, one would likely conclude that “defeat” is unthinkable. Erdogan and his close associates view the situation as an all-out war.

My questions to the AKP supporters were not sarcastic, but truly sincere. I cannot recall a time when the AKP has not presented itself as being “under attack” by domestic and foreign forces. Even the president, Abdullah Gul, is not convinced by the conspiracy theories.

How can one really justify assertions that the AKP’s political power is crippled in Turkish politics? To the contrary, just a few hours of watching the Turkish parliament should suffice in revealing that the AKP passes whatever laws it pleases. It has even managed to pass a budget for 2014 even though it has not been held accountable for government spending for the last two years.

The AKP has shrewdly stopped any sort of discussion in parliament about the ongoing corruption scandal and the charges brought against four now-resigned AKP ministers. On top of all this, Erdogan is now world renowned for trying to ban Twitter.

Hence, it is difficult to think of any scenario to suggest that a significant loss of votes would be sufficient to push Erdogan toward early general elections. I don't give credence to the AKP’s conspiracy claims, but I would argue that Erdogan has come to realize that he is up against his worst fear — the “concerned Islamists.”

As these Muslims rarely complain about internal issues, it has been hard to gauge their position. Recent leaks, however, indicate that Erdogan has single-handedly arranged to dispose of two respected theology professors from the media. In addition, there is evidence that the National Intelligence Agency (MIT) has recorded supposed degrees of religiosity and religion-related behavior, such as determined by one's donations. This has irked a number of religious groups.

In addition, leaked tape recordings of conversations reveals the AKP trying to control and manipulate Islamists groups for its own political interests. On one of these tapes, Erdogan’s senior advisers are heard calling on mediators to reach out to different religious nongovernmental organizations (NGOs) to sign a declaration to isolate the rival Gulenist movement.

The recordings reveal that the pressure on these religious groups is intense. Most of those approached comply, while a few refuse to sign on to the document. Oddly, one of the groups resisting the pressure is the Humanitarian Relief Foundation, the NGO well-known from its involvement in the Mavi Marmara incident.

Such religious groups have been the AKP’s campaign and voting base. They sincerely fear what will happen to their financial and social benefits in the post-Erdogan era. Conservative sections of society know all too well that their religious freedoms are not inalienable rights, but remain, like their financial gains, at the whim of the government

In the short term, these groups recognize that Erdogan is not on the ballot, and know it is best to stay on good terms with the AKP, but as one scholar told Al-Monitor, “The ship is damaged and taking on water.” Erdogan is becoming a liability for his core electorate.

So, to answer the big question: Turkey is not yet ready for the post-Erdogan era, but regardless of the election results, it should prepare for increased arbitrary pressure from its angry ruling elite.