What is the US discussing with the Muslim Brotherhood?

Egyptians are puzzled why the Obama administration and some in Congress are sending mixed signals on US aid to Egypt while appearing to maintain a quiet dialogue with the Muslim Brotherhood. 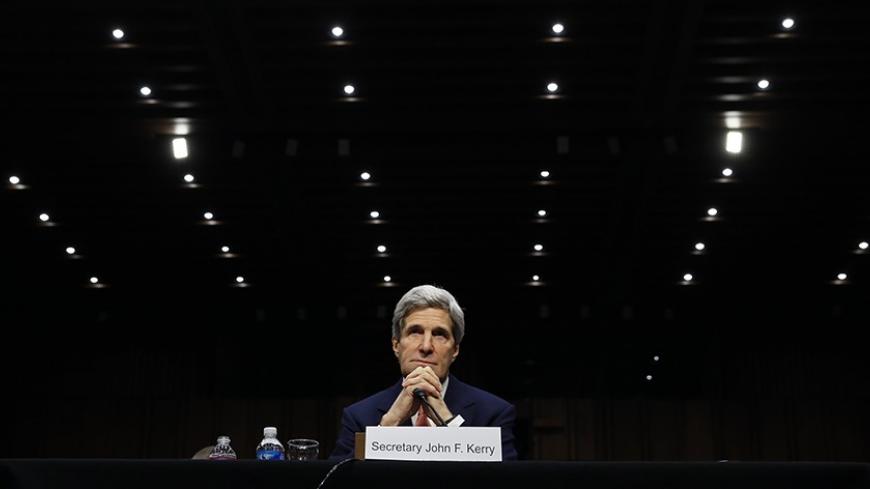 CAIRO — Secretary of State John Kerry said on March 12 that the Obama administration will “soon” decide on whether to resume military aid to Egypt, including Apache helicopters, which are key to counterterrorism operations in the Sinai Peninsula. "It is our hope to be able to make that [aid] transfer, providing there is a conclusion drawn by our team with respect to some of the things we've been anticipating [the Egyptian government] doing," Kerry related at a congressional hearing on the State Department's 2015 budget request.

Although Kerry has on several occasions appeared to be in favor of resuming normal relations with Egypt, a statement by a representative of the State Department, the very department over which Kerry presides, has caused a good deal of negative feedback in Egypt. On March 15, deputy spokeswoman Mary Harf told a group of journalists that the United States keeps in regular contact with the Muslim Brotherhood. With the Egyptian government and the public blaming the Brotherhood, along with its supporters and allies, for the terrorist attacks taking place against targets across Egypt, Harf's statement seemed insensitive to Egyptian public sentiment.

To be fair, however, the United States always maintained contact with various opposition groups during Hosni Mubarak’s rule. The situation now is different, however, in that the Brotherhood is using violence against security forces as well as civilians. Demonstrations organized by the Brotherhood always end up causing havoc, with a number of casualties among security personnel and civilians besides damage to private and public property, including homes, shops, government facilities and cars in urban and commercial areas.

While several members of Congress, primarily Republicans, have expressed support for Egypt’s new direction, considering it an element in the war on terror, others are demanding the Obama administration withhold resuming aid to Cairo until Congress approves of such a step.

Egyptians are skeptical about the US positions toward Egypt and the Muslim Brotherhood, to say the least of US intentions toward their country. A video went viral in which an Egyptian woman tells the American president to shut up. It was then turned into a techno track celebrating the mistrust, or perhaps the misunderstanding, cultivated by the administration's seemingly contradictory signals.

In response to Harf’s statement, an ONTV anchor wondered why the United States is “checking up” on the Brotherhood with such regularity. Although Harf stressed that the US government does not support a particular person or political party, but rather “support[s] the people of Egypt,” the ONTV anchor commented, “That must explain why the US stopped their aid to Egyptians — as a sign of supporting them!”

The United States seems on one level eager to resume normal relations with Egypt, but somehow it is unable to do so. Why? The administration knows that the Muslim Brotherhood’s extremist ideology has inspired terrorist organizations such as al-Qaeda and al-Jihad. The administration has plenty of evidence, presented by the prosecution at the trial and retrial involving the Holy Land Foundation for Relief and Development, that the Brotherhood had strong links with such organizations as Hamas. The retrial resulted in guilty verdicts for all the defendants. Among the evidence was “Explanatory Memorandum,” a strategy document outlining the Brotherhood's vision for the United States.

In the memo, Brotherhood leaders indicate that they plan to create an Islamist state in the United States, "destroying the Western civilization from within and 'sabotaging' its miserable house by their hands and the hands of the believers so that it is eliminated and God's religion is made victorious over all other religions." The memo lists 29 organizations working in the United States to further the Brotherhood's agenda.

According to a Politico Feb. 10, 2011, report, a day before Mubarak stepped down, FBI Director Robert Mueller told a House of Representatives committee that some Brotherhood branches had engaged in violence. He also said, "Obviously, elements of the Muslim Brotherhood here and overseas have supported terrorism," but he declined to go into detail in a public session. Even if the Brotherhood is not directly involved in violence or terrorism, it is an active participant in a “good terrorist, bad terrorist” game, where it plays the “good” guy while its allies play the scary parts.

Kerry only a few weeks ago admitted that the administration was aware that the Muslim Brotherhood had "stolen" the Egyptian revolution. Yet, the secretary of state’s own department continues to be in contact with the group. While Saudi Arabia, once a supporter of the Brotherhood, has declared the group (as well as the Islamic State of Iraq and al-Sham!) a terrorist organization, yet the United States maintains “regular contact” with it. What could be the cause of this? Despite widely circulating conspiracy theories, the reasons could be simple.

The United States is far from a monolithic powerhouse with a singular mindset, with consensus on every viewpoint, interest or policy. There are literally thousands of think tanks along with a multitude of organized lobbies, informal pressure groups, members of Congress, staffers, government officials, security agencies, analysts, corporations, activists, columnists and media outlets that influence decision making in one way or another. Some think tanks have spent the last decade recommending that the United States accept that Islamists will eventually rule the Arab world because they are popular. It is now embarrassing to see the string of erroneous analysis and misguided policy recommendations they made.

Egyptians are bewildered about how the Muslim Brotherhood still seems to maintain a foothold in some corners of Washington. The Department of Homeland Security and other anti-terrorist intelligence agencies seem to have some form of "cooperation" with the Muslim Brotherhood, possibly as part of an effort to anticipate and prevent another serious terrorist attack on US soil similar to 9/11. This nonetheless has raised some concerns among members of Congress.

So while conspiracy theories hover above eastern skies, US foreign policy continues to be dominated by domestic politics, power struggles between the White House and Capitol Hill, pressure groups, fear of terrorist attacks, survival, pragmatism, realism and self-interest. The faster Egyptians learn this, the sooner they can defend their own interests in the city with the biggest lobbying industry in the world — Washington DC.