Because Israeli authorities are neglecting East Jerusalem residents by failing to ensure a constant water supply, both Israelis and Palestinians have to cooperate on water management as a pollution catastrophe nears. 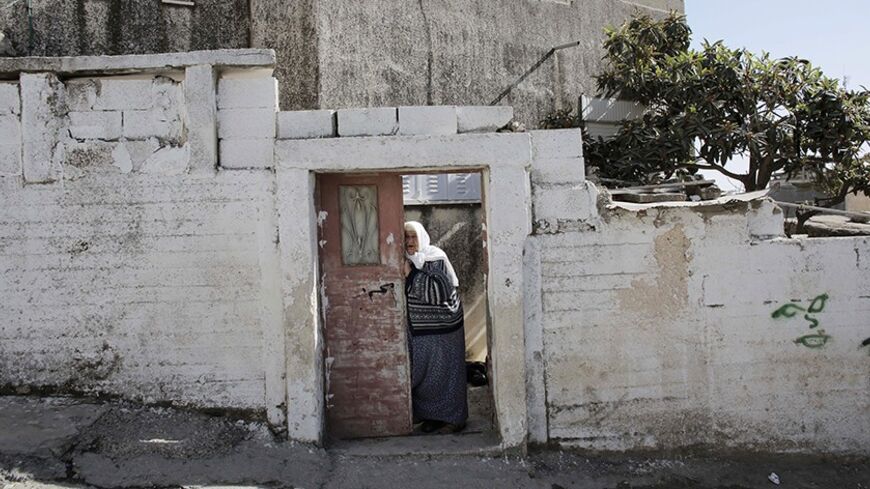 A Palestinian woman stands at the entrance to her house in the Shuafat refugee camp in the West Bank near Jerusalem, Nov. 26, 2013. - REUTERS/Ammar Awad

On March 4, the day Prime Minister Benjamin Netanyahu started off his speech at the annual AIPAC conference in Washington with a greeting from Jerusalem, “the eternal and undivided capital of Israel and the Jewish people,” the water was turned off in the homes of tens of thousands of families in the municipal area of the “undivided city.”

The neighborhoods of Ras Khamis, Ras Shehadeh, as-Salam and the Shuafat refugee camp are disconnected from the municipal water supply. (Several families “enjoy” an occasional slight drip from their taps.) These houses in East Jerusalem, on the other side of the separation fence, are home to Israeli residents who hold blue Israeli identity cards. The elderly and disabled people there, who have to wash in pails of water and carry drinking water in bottles, live a 10-minute car ride away from the affluent Jewish neighborhood of Givat HaMivtar.

The water infrastructure in the region, like all other infrastructure, may adequately provide for the consumption needs of 15,000 people, while the local population numbers 60,000 to 80,000. In the absence of urban development plans for these neighborhoods, hundreds of apartments have been built in the area without permits. Consequently, they cannot be legally connected to the water supply and sanitation systems. What’s more, the workers of the Jerusalem area's water and wastewater utility corporation Hagihon are afraid to cross the separation fence because of security concerns.

Those neighborhoods lie on the northeastern side of the fence. A physical, ethnic, social, economic and moral barrier separates them from the rest of Israel — a state that annexed them without asking.

“In any other place in Israel, the problem of tens of thousands of residents without running water would have been sorted out quickly,” says Jamil Sanduka, chairman of the residents’ association of Ras Khamis. “The problem is first and foremost that all of those in charge simply don’t care.”

The Jewish Israelis and the Israeli authorities do not seem to see these Israeli Palestinian neighbors, of whom 74% live under the poverty line, among them 53% of the children, according to official figures from 2009-2010.

The Association of Civil Rights in Israel (ACRI) petitioned the High Court on March 23 together with neighborhood representatives and the local community administration to demand that the authorities be ordered to deal immediately with the water problem. ACRI claims that this is an egregious manifestation of neglect of the neighborhoods on the other side of the wall. In almost every sphere, from education, welfare and transportation services to garbage collection and police presence, the state authorities have abandoned this section of the “eternal capital.”

Indeed, the corporation's top officials themselves have confirmed that the water, sewage and draining infrastructure in the neighborhoods beyond the wall are inadequate in view of the population living there. They have further noted that extensive development works are required to solve the problem. According to the Hagihon officials, the Jerusalem water corporation alerted the Israel Water Authority on numerous occasions to the urgent need to regulate the financing of water supply and infrastructure development and maintenance in the medium and long term. However, so far, the issue has not been settled. In a comment to the media issued by Israel Water Authority officials, they explained, “The issue is far beyond the action capabilities of the [Israeli] water economy. Inter-ministerial cooperation is required to deal with the whole set of problems and risks involved and solve the problem once and for all.”

The East Jerusalem neighborhoods on the other side of the fence are not the only areas where the water-supply issue far exceeds the capacity of the Israeli water network. In his Knesset speech Feb. 12, European Parliament President Martin Schultz raised the issue of water-resource allocation between Israelis and the Palestinian residents of the territories. If the diplomatic process fails, the water crisis will deepen. As noted by Friends of the Earth in Israel, the changes in demographics, standard of living and technology have made the current allocation of water resources, set 20 years ago as part of the second Oslo Accords, irrelevant. The management of the joint environment and water within the framework of this agreement has been proven ineffective. The Israeli-Palestinian committee, established to manage the joint water resources in the West Bank, has not met in an official session for more than two years.

There is no separation fence that will stop the raw sewage flowing from Hebron’s industrial zone, or from the Israeli industrial zone Mesilot Tulkarm in the West Bank, to the aquifer. Some 65 million cubic meters of raw or partially treated sewage from the Palestinian Authority and Israeli-controlled areas in the West Bank pollute the joint Israeli-Palestinian aquifer every year. The pollution of the water and other natural resources gets more severe with every passing day and threatens the health and well-being of both peoples.

Sewage that originates in the West Bank flows in the rivers near the Israeli towns of Haifa, Hadera, Netanya, Tel Aviv, Ashdod and Beersheba. Sewage-treatment facilities erected along the Green Line to deal with the sewage flowing in rivers from the West Bank are ineffectual because they cannot anticipate the type of sewage that will reach them downstream: industrial or domestic. A significant portion of the sewage flowing in the rivers seeps into the joint groundwater before it reaches the Green Line. An absence of regional environmental cooperation results in the prolonged decay of natural treasures like the Dead Sea and the Jordan River. Unilateral environmental measures have failed thus far.

Dealing with the entirety of the problems and risks to the water system in areas of Israel and the West Bank requires, therefore, cooperation not only among Israeli agencies, as the Water Authority said in its reaction, but also between them and the Palestinian Authority. The problem is far more severe in the Gaza Strip. Experts predict that the demand for water in that area will increase by 60% by the end of the decade. According to UN estimates, only 10% of the drinking water in the Strip conforms to the standards of the World Health Organization. The UN estimates that the groundwater reservoir will become unusable as early as 2016, and residents of the Strip will be left without a source of water.

At a Jan. 27 conference, Uri Shani, the former director of the Water Authority who represented Israel in talks with the Palestinians and Jordanians on water agreements, pointed to a significantly high rate of childhood diseases in the Gaza Strip, illnesses that originate in polluted water. Gidon Bromberg, the Israeli director of Friends of the Earth-Middle East, said at the end of the conference that the power-supply problems in the Strip make it difficult to build water desalination or sewage-treatment plants and warned, “We are on the brink of disaster. No fence will stop 1.5 million people for whom the Hamas rulers do not provide a solution. They will try to reach Israel to obtain drinking water.”

In Netanyahu's AIPAC speech, as in any of his others, there was no hint of the ticking time bomb of the dire water shortages in East Jerusalem, the West Bank and Gaza. As always, the only water in which he was interested was Iran’s heavy water.