In a rare public appearance, John Brennan said the US relationship with Saudi Arabia remains “on strong and solid ground” despite differences over Iran, Syria and Iraq, and denied that the CIA hacked into the computers of Senate investigators. 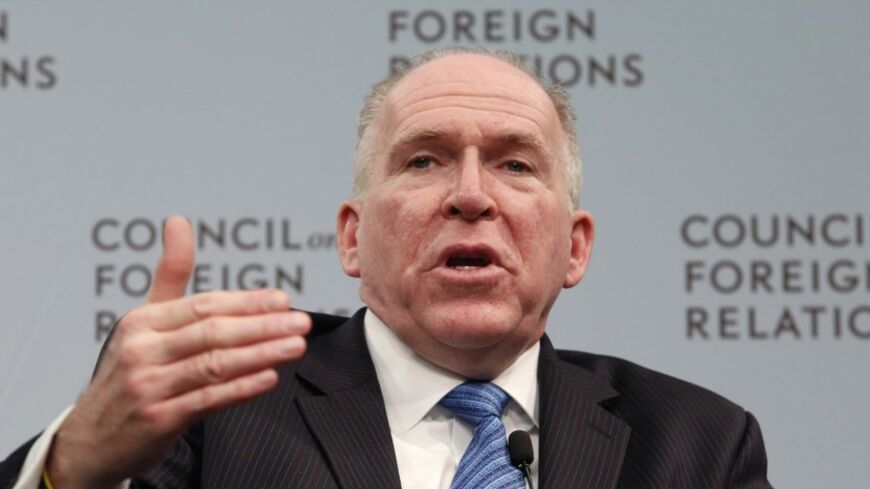 CIA Director John Brennan speaks at a Council on Foreign Relations forum on the "challenges and opportunities for the American intelligence Community" and to reflect on his first year as CIA director in Washington, March 11, 2014. - REUTERS/Yuri Gripa

WASHINGTON — CIA Director John Brennan said on March 11 that Syrian President Bashar al-Assad “probably feels more confident” that his regime will survive as a result of his army’s recent performance and the impact of fighting between Islamist rebels.

Speaking at the Council of Foreign Relations in a rare public appearance, Brennan, who spent much of his career at the CIA before serving as chief White House counterterrorism adviser in President Barack Obama’s first term, said the Syrian army had proven to be more resilient than many had anticipated after the uprising began three years ago.

“Syria has a real army,” Brennan said in reply to a question from Al-Monitor about how long Assad might stay in power. The Syrian military, he added, has benefited from years of training and equipping by Russia and is “a large conventional military force with tremendous firepower.”

While acknowledging the proficiency of some of the Islamist fighters battling the Assad regime, Brennan noted that “internecine fighting” among the rebels has hurt their cause.

“Assad has been able to stand back and watch their fighting,” Brennan said.

Brennan said the United States was concerned that Syria under Assad has become a magnet for extremists and terrorists who might use the country as a springboard for attacks outside the region. The jihadist threat, Brennan said, has been the focus of his discussions with regional counterparts that the United States is counting on to help blunt this threat.

Many of the questions addressed to Brennan dealt with the situation in Ukraine, which the CIA appears to have anticipated — unlike the Pentagon’s Defense Intelligence Agency.

Russia, he noted, had “quite an extensive presence already in Crimea” before it sent troops to occupy the peninsula following the collapse of a pro-Russian government in Kiev. Asked if the Russians might also send troops into eastern Ukraine, Brennan noted that Russian President Vladimir Putin has “laid a public predicate for possible moves” by expressing his concern that Russian-speaking Ukrainians there would face discrimination from a pro-Western government in Kiev — the same pretext Russia used for moving into Crimea.

Brennan said he could not predict what Putin would do since much would depend on developments over the next few days — how Crimeans vote in an upcoming referendum and what the reaction of the rest of the world will be. “Has he made a decision? … Only Putin knows,” Brennan said.

“We’re at a very delicate time” and “what we need to avoid are provocations” on both the Russian and Ukrainian sides, he added.

Obama meets Wednesday in the White House with Ukrainian Prime Minister Arseniy Yatsenyuk, who took office after pro-Russian President Viktor Yanukovych fled in the aftermath of months of protest demonstrations in Kiev and other Ukrainian cities. The United States has promised the new government $1 billion in loan guarantees and the European Union has also prepared a massive economic bailout package. However, US efforts to negotiate a diplomatic de-escalation of the crisis with Russia have made no appreciable headway.

In response to other questions, Brennan:

Brennan noted that Obama closed secret overseas interrogation facilities five years ago and said the CIA hopes to put the whole post-9/11 era of enhanced interrogations, rendition and detention of alleged terrorists behind it so that it can focus on other threats to US national security. Still, he warned that terrorism will remain a major concern despite blows struck against al-Qaeda’s core in South Asia.

“The US government and the American people will be dealing with terrorism for many years to come,” he said.

Brennan also acknowledged the tensions arising from growing technological advances, which make it easier to steal secrets and harder to protect clandestine officers and operations. How to ensure US national security while also safeguarding Americans’ “liberty, freedom and privacy” are the sort of “challenges and questions that truly hurt my head,” he said.