The endgame for the followers of former Egyptian president Hosni Mubarak, however, is the end of military rule. 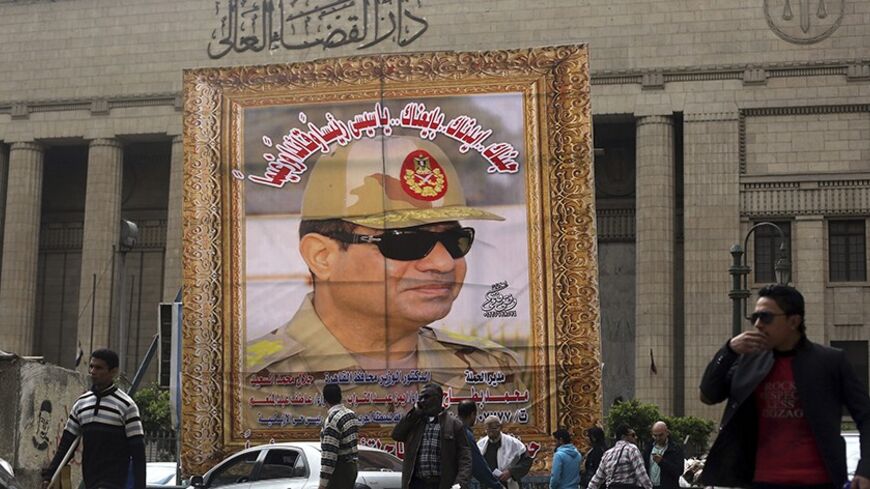 CAIRO — The release of Ahmed Ezz — steel tycoon and one of the most prominent figures in the [former President Hosni] Mubarak regime — sparked another round of lamentations by the Jan. 25 revolutionaries that the old state is making a comeback. Those lamentations are mostly incorrect for four distinct reasons:

For the Jan. 25 revolutionaries, the feloul, or old regime backers, are a monolithic entity that is simplistic and inaccurate. Their representatives may be their elite, which is why they are usually framed in the context of an unholy alliance of interests of Egypt’s businessmen, tribal leaders and prominent families, but such analysis ignores their large voter base, which is none of those things. The quick and dirty political definition for the feloul would be social conservatives, even though that’s not completely accurate either. While the majority of these are regressive in their mindset and beliefs, they do have a progressive minority that is both their face and their brain, many of whom were the faces of the National Democratic Party (NDP) and the Ahmed Nazif government during the latter years of the Mubarak era. It is an alliance that bears an uncanny resemblance to the Republican Party in the US: Social conservatives make up the majority of the base, while the leadership and strategists are more libertarian-leaning than anything.

The leadership, since the late 1990s, had been plagued with the notion of then-President Mubarak’s mortality: They understood that their interests were very much tied to him, and they eyed his advanced age with nervousness. Mubarak’s death, with no clear vice president to succeed him, would have meant a new president with a military background, whose interests and mindset might not have meshed well with theirs. They viewed the military’s expanding economic empire with a silent mixture of envy and dismay, given the military’s control over sectors that they would rather see properly developed by the private sector, and how inefficiently run those military-owned companies were. They saw a need to remove the military from the equation of power in Egypt, and they viewed Mubarak’s son Gamal as their solution.

For the feloul, Gamal Mubarak offered a way out of successive military dictatorships, and a means to expand their power in the country to sectors they couldn’t touch. By having Gamal ascend to power, they would effectively have the first Egyptian civilian president of Egypt since 1952, and break the cycle of the military hold over power. Slowly but surely the NDP’s old guard (most of whom were sons of the military state) were being replaced by the new guard of young oligarchs like Ahmed Ezz, and Gamal was getting thrust further and further into the lime light, until Jan. 25 happened and all of those plans turned to dust.

Those same strategists and leaders control the old regime backers' political faction until this day, which is why their early support and heavy promotion of Field Marshal Abdel Fattah al-Sisi to become president of Egypt raised the eyebrows of those who know them, especially how keen he is at expanding the military’s economic empire and populist rhetoric. So why push for him for president, especially since he gave no indication of being aligned with their interests? The interesting answer is that this is their final gambit to end military rule in Egypt once and for all.

Feloul leaders has been silently seething against the military since Mubarak was removed from power in 2011, and hasn't stopped since. They saw their symbolic members getting arrested by the military, the Muslim Brotherhood allying itself with the military in an attempt to take their place, and believe that their presidential candidate, Ahmed Shafiq, won the 2012 elections but that Egypt's Supreme Council of the Armed Forces (SCAF) forged the results for Morsi. They spent the entire year of Morsi's rule being controlled by Egyptian intelligence, and after utilizing their resources (namely money and the media) and supporters to ensure the success of June 30, they were sidelined in both the interim government and the constituent committee in favor of Jan. 25 symbols. For the feloul, the military’s involvement in politics so far has yielded catastrophic results and has to be stopped once and for all, and the only way to do so is if the military’s savior image is destroyed forever, and the only way to do that is to have it fully responsible for ruling Egypt and fail as expected.

So, they have resorted to a very simple strategy: They publicly aligned themselves politically with the military, wrapped themselves in the flag, accused everyone else of being unpatriotic and heavily promoted the Sisi presidency. This way the feloul get political credit that they can later use against Sisi the moment the population realizes that he cannot meet its expectations, even with the military’s resources at his disposal. Once the population turns on Sisi, the feloul will utilize public pressure to force the military to leave power forever. Given that the military cannot risk handing over power to either the revolutionaries or the Islamists, this leaves the feloul the only viable and logical option left. Check and mate.

The military understands this, and is acting accordingly. On one side it is drafting economic laws that will increase taxes and fines on Egypt’s rich, thus chipping away at the economic powers of the wealthy, and on the other side the armed forces are counting on the feloul's lack of discipline and hunger to cause it to be self-destructive at the next parliamentary elections. The military can’t currently move against the feloul publicly since it does need them to stabilize the economy, and because they are their only political ally left, given that they are currently fighting with the Islamists and facing growing hostility from the revolutionary camp. Military leaders also understand that there will come a point when, to save their own necks, they will need scapegoats to appease the public, and the feloul leaders, given their wealth and reputation for corruption, are perfect for that. Both sides are sharpening their knives, and awaiting the right moment to draw first blood in a fight that is becoming increasingly inevitable, and will shape Egypt’s future for years to come.