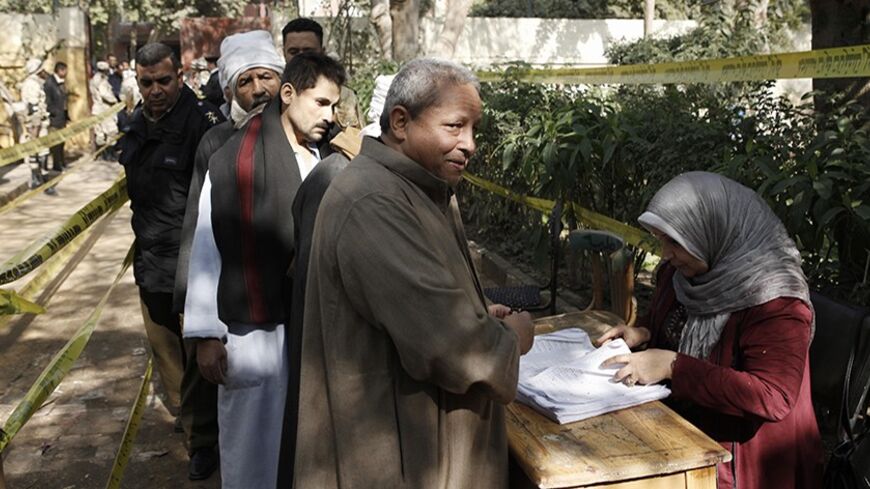 Egyptian men stand in line to cast their votes at a polling booth in the rural district of Fayoum, Jan. 15, 2014. - GETTY IMAGES/Ed Giles

FAYOUM, Egypt — Tucked away in the idyllic Egyptian countryside 100 kilometers (62 miles) southwest of Cairo, the village of Mansheyet Tantawy couldn’t have been further from the pomp and fanfare that engulfed the capital and other major hubs throughout the Egyptian presidential race. Located in the Fayoum governorate, the village had two schools-turned-polling stations serving around 18,000 people. By the early afternoon on the second day of the elections, the slow trickle of voters entering the schools from the main dirt road had already dried up.

“I voted. I took my family and we all voted for Sisi. Who else would be able to handle the country now?” said Khaled Garni, a farmer in his early 40s, a day before former military chief Abdel Fattah al-Sisi won the elections. Several other villagers echoed this statement with varying amounts of enthusiasm, but the majority met questions about the elections with either indifference or disapproval. Voter turnout in Fayoum, estimated at 31%, was considerably lower than Egypt’s total turnout rate of about 45%, according to judicial sources. Ninety-six percent of Fayoum voters favored Sisi, who dominated the polls in all 27 governorates.

According to Mohamed Fahmy Menza, a professor of political science at the American University of Cairo, Sisi’s sweeping victory over his opponent, Hamdeen Sabahi, in the provinces was secured through the coordinated efforts of rural leaders mobilizing local communities to vote in his favor. “Those working for the Sisi campaign utilized networks and groups that were working with the National Democratic Party (NDP) during Hosni Mubarak’s reign. The campaign is dependent on tribal and extended family ties that seem to be serving them,” he told Al-Monitor. “If a senior or notable figure pledges allegiance, the rest will follow suit.” In some cases voters have little knowledge of candidates or their political platforms. “I don’t know whom I voted for, I just went along, but I voted,” one woman from Mansheyet Tantawy told Al-Monitor, as she watered the plants outside her mud-brick home.

Tribe notables stand to gain considerably by throwing their weight behind Sisi. Under Hosni Mubarak, prominent figures in rural and semirural areas held key administrative positions in their provinces, helping the former regime maintain its hold on the countryside. Replaced by Muslim Brotherhood appointees under Mohammed Morsi, many were looking to make a comeback under Sisi. Tribal organizations held a series of conventions across the country weeks before Sisi announced his decision to run in the elections, to assert their support for the field marshal’s candidacy. “They want to get close to the center of power and authority, pledging allegiance with expectations of payback,” Menza stated.

Sisi took an active approach toward engaging tribal leaders. The incoming president had refrained from meeting most of Egypt’s key demographic groups throughout his campaign, but held at least three public meetings with notables from 240 clans during his two-month candidacy. Sisi hoped that securing tribal endorsements would increase voter turnout, contributing to the credibility of his imminent victory. This strategy is reminiscent of Egypt’s first multi-candidate elections in 2005, when Mubarak’s success was a forgone conclusion, yet members of the NDP and Mubarak himself urged voters to head to the polls. They did so knowing that the candidate of the state, the strongman, would win the swing vote, therefore guaranteeing the largest possible margin of victory.

Tribe notables intensified efforts to consolidate support for Sisi during the months leading up to the elections. Egypt’s biggest tribes, including Ashraaf, Howara and Alarab held mass meetings in Fayoum, Cairo and Qena, with representatives from the official Sisi campaign and its political allies in attendance. Village elders from Upper Egypt promised unprecedented support and delivered; Sisi won 97.2% of the votes in Egypt’s south. In Ismailia, thousands of Egyptians from across the country attended a conference organized by the Higher Council for Tribal Affairs on May 12. The council pledged “material, as well as moral support” to Sisi, calling on him to establish a national council for Arab tribes, if he were elected.

The National Council for Arab Tribes was founded only 10 days later on May 22 by Omar Sumeida, vice president of al-Dustour party. The umbrella organization is the first of its kind since the days of King Farouk, an interest group that encompasses representatives from clans across the country. For decades, Egypt’s tribes have sought to unite under an organization sanctioned and recognized by the state, which feared the emergence of a new center of power. The vision was finally realized courtesy of one of Sisi’s main allies and campaign organizers in what appears to be an upgrade of long-standing ties between Egypt’s traditional social forces and its political elites. “We want to ensure broader representation for Arab tribes, and we want to show that we are participating in the post-June 30 transition,” Mosad el-Azumi, one of the National Council’s coordinators, told Al-Monitor.

But Sisi’s high-level alliances will only go so far in guarding against future unrest, as living standards in the countryside continue to deteriorate. Egypt has long followed unbalanced developmental policies that deepened the urban-rural divide. Poverty rates in the populace in provincial areas reached seven times as high as those in urban governorates in the years before the revolution, leaving large swaths of the population feeling marginalized and neglected.

Sisi’s plans for Egypt’s underserved countryside were broadly described in his electoral program, released less than a week before voting began. One section briefly addressed the necessity of infrastructure developments to deliver running water and sewage lines to “all villages in need.” Under “Agricultural Development and Elevating the Egyptian Farmer,” a bullet-point summary of future goals is provided, which includes improving irrigation systems, reclaiming desert land and introducing mechanized farming.

In the meantime, Egypt’s president will likely maintain the status quo: a downward flow of patronage in which benefits rarely trickle down to the lower ranks of society. People like Ahmed Abu Sultan, a widowed farmer in his late 30s who cannot afford to remarry, will continue to lead their lives within the parameters they have always known. “They say that he will make things better. These areas have heard such promises from men like him as far back as anyone can remember,” he remarked, in a tone lingering between apathy and discontent from his impoverished village by the bank of Lake Qarun.