Abbas returns to warm welcome after resisting US pressure

Thousands rallied in the West Bank upon the return of President Mahmoud Abbas from the United States, lauding his refusal to accede to US demands on peace talks with Israel. 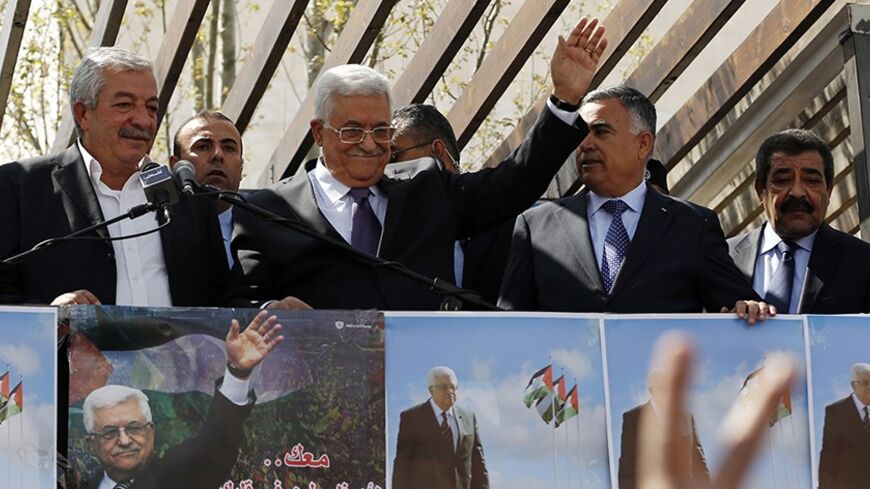 Palestinian President Mahmoud Abbas waves during a ceremony in Ramallah to welcome him upon his return from Washington, March 20, 2014. - REUTERS/Mohamad Torokman

Palestinian President Mahmoud Abbas received a hero’s welcome in Ramallah after returning from what was billed as a tough summit in Washington with US President Barack Obama.

Abbas was hailed as having stood his ground in the Oval Office meeting, resisting strong pressure from the United States to budge on at least two publicly stated issues: recognition of Israel as a Jewish state and the long-term deployment of Israeli troops in the Jordan Valley.

Neither US officials nor Palestinians have stated what went on in the closed meeting. Public demonstrations in support of Abbas were held in many West Bank cities before and during the meeting. While thousands rallied in the West Bank, Hamas officials in the Gaza Strip banned the holding of similar demonstrations.

The fact that Abbas held his ground was indirectly admitted by Israeli Deputy Foreign Minister Zeev Elkin, who told Al-Monitor that the Palestinian leader has not changed his position "one millimeter." Abbas himself basked in the public support and gave a short statement reassuring his supporters that he has held his ground politically.

Another indication that no agreement was reached was in the fact that most of the public discussion following the meeting has focused on the need for extending the talks perhaps another nine months or at least until the end of the year. One issue that is of concern to Palestinians is the threats publicly stated by some Israeli officials that the last group of long-term prisoners would not be released. This group includes Palestinians who are citizens of Israel, the release of whom would legitimize Abbas’ position regarding fellow Palestinians who hail from inside the Green Line. The rights of 1.6 million Arab Palestinians who have remained in Israel are one of the main reasons why the Palestinian leadership refuses to recognize Israel as a Jewish state. In the pre-summit press availability, Abbas indicated that the prisoner release, which had been agreed to at the outset of the talks last July, “will give a very solid impression about the seriousness of these efforts to achieve peace.”

The release of new prisoners seems to be the price that Palestinians are offering for the extension of the talks. In addition to the demand that Israel suspend its settlement activities, the Palestinian leader is said to have requested the release of three PLO prisoners including popular leader Marwan Barghouti. The Associated Press reported that Abbas has requested the release of Barghouti as well as Ahmad Sadaat of the Popular Front for the Liberation of Palestine and another Fatah leader, Foad Shawbki. The latter two were held in a Jericho prison until Israeli troops in 2006 stormed the Palestinian prison and arrested them. Israel gave no indication whether this request would be honored, but Israeli officials have in the past adamantly rejected calls for the release of Barghouti, who is serving a long-term prison sentence for his role in ordering attacks on Israelis.

Palestinians and many around the world hail Barghouti as Palestine’s Nelson Mandela. A campaign to release Barghouti was in fact launched last October from the South African landmark of Robben Island. Israel for its part has been calling for the release of US Jewish citizen Jonathan Pollard, who was convicted in the United States of spying for Israel. Some have suggested a three-way deal, but the Americans have regularly rejected making such a link.

While Barghouti’s release would provide new impetus to Palestinian politics, it would also help Abbas hold off a strong challenge from the controversial Mohammed Dahlan. Barghouti, who hails from a Ramallah village, like the Gaza-born Dahlan and Hebron-born Jibril Rajoub represent the new generation of Palestinian leaders who have struggled against Israel from inside the occupied territories. All three were popular in the first intifada, were deported by Israel and came back to Palestine with former PLO Chairman Yasser Arafat to take leadership positions in the Palestinian Authority.

Once the welcoming voices for Abbas fade, Palestinians will be confronted with a continuing bad reality. Further settlement announcements were made this week leaving Palestinians totally impotent in being able to stop what they consider illegal actions on the part of the Israeli occupiers. An extension of the talks with some restrictions on Israeli settlement expansion appears to be the only practical way to stop this Israeli aggression on Palestinian land.