Senior Fatah official Abbas Zaki warns in an exclusive Al-Monitor interview that the Palestinians will resume their efforts to join UN agencies if Israel fails to free the last group of Palestinian prisoners as per their agreement to hold peace talks. 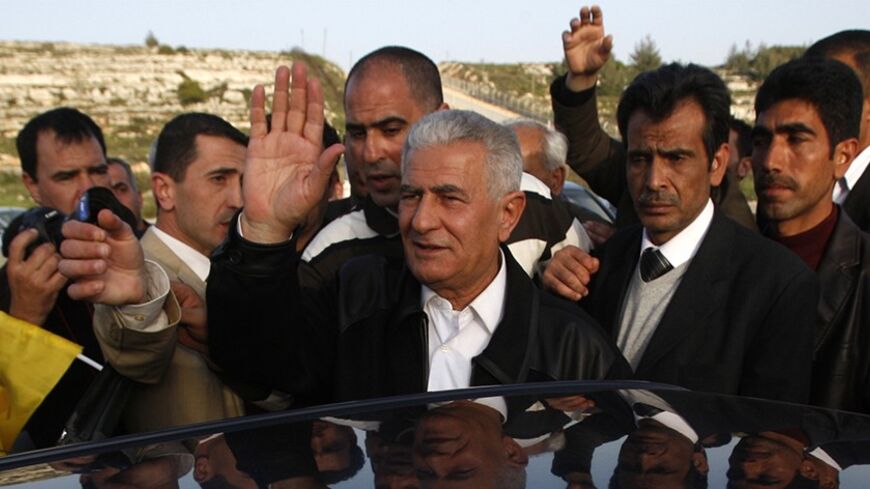 A leading Palestinian official has said that the end of March, rather than the end of April, could be the date that the Palestinian leadership moves to join United Nations agencies. “Our agreement was clear,” Abbas Zaki, a member of Fatah’s Central Committee, told Al-Monitor in an exclusive interview. “In return for Israel releasing all 104 [Palestinian] prisoners, we will refrain from joining any further UN agencies. If they renege on this issue, we are free to join UN agencies. This has nothing to do with the end-of-April deadline for the face-to-face talks.” Zaki called the current situation “very dangerous” and said the Central Committee is holding an “open-ended emergency session.”

Israeli officials, including Tzipi Livni, the justice minister and lead negotiator, have threatened that the release of the fourth tranche of prisoners, scheduled for late March, would not go forward unless the Palestinians agreed to an extension of the talks beyond their April 29 deadline.

Zaki, a former ambassador of the Palestine Liberation Organization (PLO) to Beirut, asserted in the interview that the Palestinians continue to yearn for peace, but not at any cost. “We have absolutely no regrets for taking the path of peace, but if this process is a failure and a waste of time, we will not hesitate to say so.”

Speaking on the upcoming Arab summit, scheduled March 25 in Kuwait, the current commissioner for Arab affairs in Fatah said that he hoped Arab leaders would support Palestine and refrain from taking contradictory positions. “We want them to truly support the Palestinian negotiating position and to ensure that the United States remains neutral in the negotiations. What we don’t want is for anyone to volunteer a position without knowing the background to it.”

Zaki said that the issue of recognizing Israel as a Jewish state has been rejected by Palestinians as well as Arab foreign ministers at a meeting in Cairo in the preceding days. More of the interview follows.

Al-Monitor:  If the Israelis refuse to release the last batch of prisoners due March 29, will this trigger Palestinian moves toward UN agencies, or will you wait until the end of April, which is the date the nine-month negotiating period ends?

Zaki:  The situation is very dangerous. We have announced that the Fatah Central Committee meeting is in an open-ended emergency mode. The negotiating period and the release issue are totally different. Our agreement was clear. In return for Israel releasing all 104 prisoners, we will refrain from joining any further UN agencies. If they renege on this issue, we are free to join UN agencies. This has nothing to do with the end-of-April deadline for the face-to-face talks.

Al-Monitor:  President Mahmoud Abbas has suggested that the release of Marwan Barghouti, Ahmad Sadaat and Foad Shobaki would allow for an extension of the talks. Is this a decision by Fatah, the PLO or the office of the president?

Zaki:  Marwan Barghouti is an elected member of the Palestinian Legislative Council. A number of other elected legislators, including Hamas members, are incarcerated in Israeli jails. We have said that if Israel is serious about the peace process, the way to prove this is to allow prisoners, especially members of the Palestinian legislature, to be released. Any peace process requires the end of human suffering, and this means the release of prisoners and the handing over of the bodies of those killed in action.

Al-Monitor:  What are the Palestinian expectations from the upcoming Arab League summit that will be held in Kuwait [on March 25]?

Al-Monitor:  But what specifically do you want from Arab leaders meeting in Kuwait?

Zaki:  We want them to truly support the Palestinian negotiating position and to ensure that the United States remains neutral in the negotiations. What we don’t want is for anyone to volunteer a position without knowing the background to it. We want real peace and we don’t want to perpetuate or legitimatize the occupation.

Al-Monitor:  What about the issue of recognizing Israel as a Jewish state?

Zaki:  We have refused this request as Palestinians, and the Arabs have also refused it in the previous meeting of foreign ministers.

Al-Monitor:  There are press reports that talk about the possible cancellation or the suspension of the Arab peace plan. What is the Palestinian position regarding this idea?

Zaki:  This issue is totally in the hands of the Arab leaders. We can’t talk about it. The Arab summit in Beirut approved the peace plan, followed by its approval by Islamic countries, in Tehran. What it offers to Israel is unique. It offers 57 Arab and Islamic countries to normalize relations with Israel. Unfortunately, ever since the plan was announced and approved, no one has paid much attention to it on the Israeli side. Instead, Israel has continued its criminal actions, including the illegal building of settlements and the refusal to make peace. The issue between us and Israel is not like it was before. We know what Israel wants, and they know what we want. We have given everything for peace, but we are not willing to legitimize Israeli actions, settlements and continued occupation of our lands. We have made the difficult compromises for peace, and I am sure we are going to be victorious, because we are on the right track.

Al-Monitor:  What options do you have if the Israelis continue their position?

Zaki:  We can hurt Israel in many ways without any use of arms.

Zaki:  As you know, we can act now as a state under occupation recognized by 138 countries and opposed by very few. We can join 63 different UN agencies, including the International Court of Justice.

Al-Monitor:  Does the Russian action in Crimea make the situation better or worse for Palestinians?

Zaki:  The Russian-Ukrainian conflict certainly complicates the scene. This international crisis will for sure keep many key countries busy, which is not good for the Palestinians.

Al-Monitor:  Some are demanding that Israel carry out the same request that is being asked of Russia, namely, to respect the rights of Palestinians and end its occupation. Where do you stand?

Zaki:  Russia has always considered this area [Crimea] part of its national territory. As you know, it was part of the Soviet Union, and the majority of its population are Russian speakers. What the Russian move will mean in this region is probably a strengthening of their support for Syria.

Al-Monitor:  As a senior member of the Fatah Central Committee, what is it you expect from the Americans?

Zaki:  We are true believers in peace, and we want to do what is needed to bring freedom and peace to our people and our region. The Israelis, on the other hand, talk peace but continue to build illegal settlements and put obstacles in the way to peace. We have absolutely no regrets for taking the path of peace, but if this process is a failure and a waste of time, we will not hesitate to say so. Palestine is the source of peace in the region, but failing to resolve the Palestinian issue will keep the region in turmoil. The sooner that the Palestinian issue is resolved, the better for all parties and the region.